We have what are called autumn olives growing on bushes in our area.  They aren't an olive at all, but instead a small, edible berry.  We went and picked a bunch recently.  They have little stems on them and a fairly chewy seed.  Because of this, I thought the easiest way to use them would be to make a jelly. 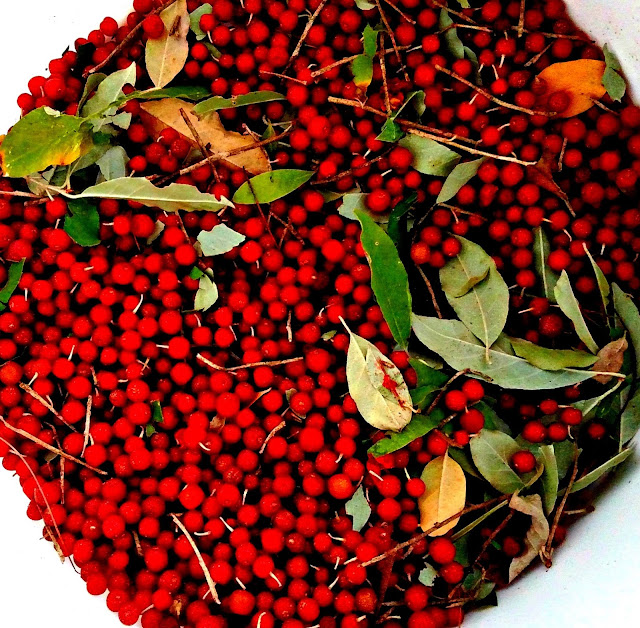 I picked out as much debris as possible and then rinsed the berries.  I just left the little stems on, as it seemed like removing every little stem would take me all day long.  Then I put them in a pot and cooked them down with about half a cup of water, mashing them with a potato masher. 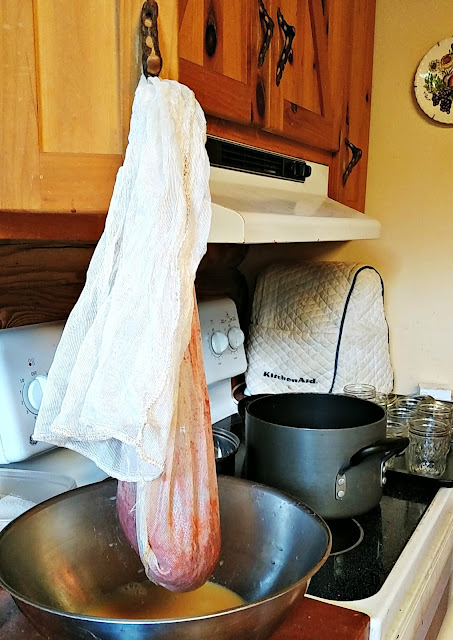 I don't have one of those sieve stand things, but I made good use of a cabinet handle and some cheesecloth for straining out the juice.  Once things cooled, I squeezed out as much juice as possible.  I got 4 cups of juice from the berries.  I brought it to a high boil with some sure-jell.  Then added 5 1/2 cups of sugar.  I returned it to a high boil and cooked it until it passed my firming test in a glass of ice water.  Then I filled jelly jars and processed in a boiling water canner for 5 minutes. 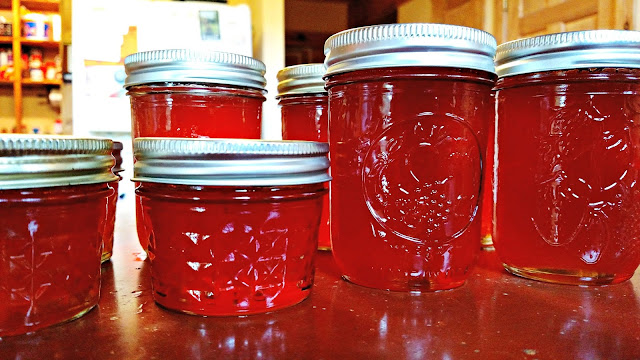 I was pleased with how it set up overnight.  It also has a really nice rosy color, which is surprising since the juice was sort of beige.  A good use of an invasive species, don't you think?

Hope everyone has a Happy Halloween!

How very interesting. Had not heard of these berries. They sure make a pretty jelly - what is the taste similar to?
Over the weekend, I blogged about pickled watermelon rind. I've always eaten them as "pickles" but one friend commented that her mom made preserves with them.

Great to learn that there something sweet to do with this invasive weed.

That is some good stuff, I never knew that they were good for anything but wildlife. I think they must have got their name from the bush itself as it has an olive tree look to it's color or at least that is what I heard. I know that they were introduced and spread like weeds back in the 60s where I lived. A bush grew every where a bird pooped. They have a unique strange sweet smell when blooming in April.

That's a beautiful color! I have never heard of autumn olives. Happy Halloween, and may the boys share their candy with you. :-)

I never knew you could use the berries

Well, look at YOU! Constantly learning, and trying new things. I can imagine how good that is. :)

Beautiful picture of all the red berries with a touch of green with the leaves and stems!

It turned out gorgeous!! You could call it blood jelly and serve it Halloween night. How does it taste?

I have never heard of them! Interesting.
I love foraging-the jam looks great :)

That does look really good. I'm the only one that likes jam or jelly in my house. I don't get it. I do make some from our berries. Then I give them as Christmas presents.

Are they sweet? Tart?

Good for you trying it out. I hope it is delicious.

Seems funny that they are now called invasive. I remember when Virginia's Forestry Department gave them away to encourage folks to plant them for wildlife! Let's see, that was 40-something years ago. Wow.

What an awesome idea. Did your kids help you pick the berries? They must be wowed by Mom's creativity. If you can't get rid of this invasive species, then at least you can use it for jelly.

I hope the flavor is as delicious as that color is beautiful!

I'm completely impressed! And thank goodness they don't look or taste like olives....yuck. :)

We have never seen them or heard of them. They sure do make pretty jelly!
love
tweedles

This is an excellent use for this berry! It does really look beautiful in the jars.

Now that sounds good....when you mentioned olive jelly I just couldn't get my head around it!

autumn berries..I have seen something similar but not so sure whether it's the same as what you have. Looks nice..

I have never heard of these berries before- but I LOVE that you put an invasive weed to good use. Looks good! :)
~Jess