The past couple of months I blogged some about the training I was doing for an upcoming 24 hour race.  The goal was to cover as much distance as you could over 24 hours.  The morning started off as a chilly one, but had warmed up by 9 am.  The race course was a loop of about 1.18 in distance.  This was great because it meant you passed by an aid table for food and drinks, plus a bathroom, every single mile.  And I was able to park quite close to the crushed gravel track so when I needed to get supplies from my car (I removed and added layers throughout the day) it was convenient and didn't eat up much time.

My friend, Gloria, came down from Northern Virginia to do this race.  She had a goal of at least 50 miles (which she met!).  I didn't have any set goal.  I just wanted to push myself and hopefully run further than ever before.

Here's a picture of Gloria, Pam Rickard, and I taken in the first hour of the race (photo credit: Matt Ross). 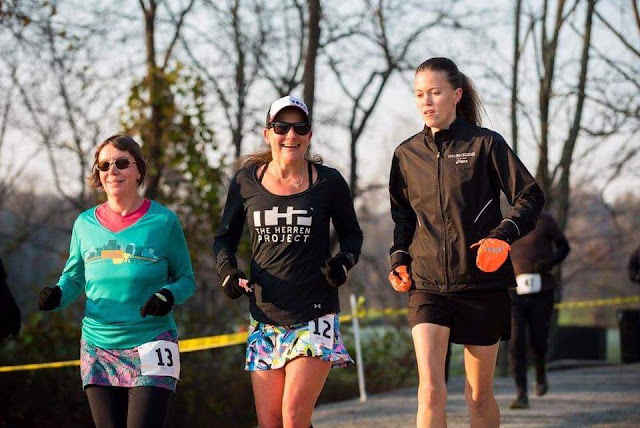 As the day (and miles) wore on I started having a lot of calf cramping, which was unusual for me.  I think this was a fueling issue.  In a marathon I would've eaten Gus every 3 miles.  But I was craving salty snacks and they had the table of food so I was eating stuff like a handful of pretzels here or a handful of olives there.  In retrospect, this was not substantial calories.  I really enjoyed some salted baked potatoes in the afternoon.

Two of my running friends, Trina and Steve, came out in the late afternoon to offer company and motivation.  I was just walking at this point due to the calf cramping.  Although I was bummed I couldn't run any longer, I was feeling good mentally and was having fun.  I was so thankful to have friends willing to come brave frigid weather just to cheer me along. 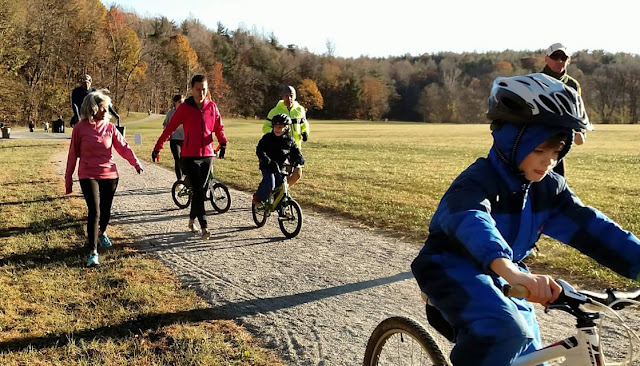 I saw a guy who had what looked like stickers on his calves and I talked to him for a bit about it (he had calf cramping too).  He recommended Salonpas (which is what the stickers were) so Paul picked some up for me at CVS.  I think they may have helped a bit.  I also took arnica, which is a homeopathic remedy for sore muscles. 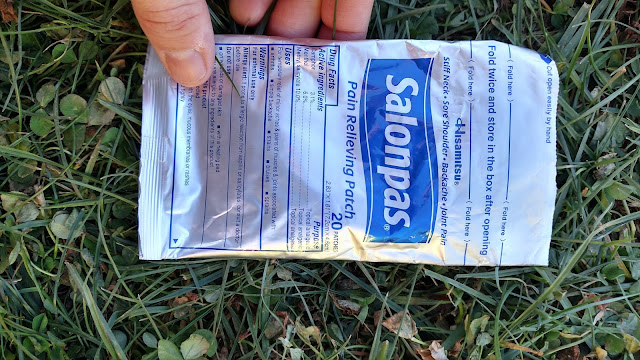 I took breaks for stretching and rolling out sore muscles a few times, plus changing layers.  It became extremely cold and windy as the day went on.  The wind gusts were so huge they blew whirlwinds of crushed gravel and dust at the runners (the next day, my eyes felt gritty and were swollen as a result).  They had warm pizza for the runners around 6 and it really hit the spot (and after dark, they also had some soups).

My furthest run prior to this was 34 miles.  I ended up covering 46 miles total.  Much of it was walking.  I loved when it got dark and there were glow lights all around the track and you could see the bobbing headlamps of all the runners.  Plus, the stars were amazing.  It was a magical feeling, despite the cold and wind.  I wished I could have kept going, but a muscle back behind my right knee started hurting at a level that suggested injury, and my knee was starting to give with my steps as a result.  In addition, I had long ago lost the battle to some significant chaffing issues.  So I decided to head home, which luckily isn't far from this race.  Once I got in the car, I realized I was starving, and had to stop at Bojangles for a chicken biscuit.

I loved this race!  The camaraderie among the runners and the race volunteers is amazing.  I met so many interesting people and learned a lot from my own performance.  I think I'll give this another shot next year, and try to at least hit the 50 mile mark.  I've run a lot of races over the years, but this one really had that extra something special.

What an interesting race. I just had a evaluation with my workout for the winter, when lots is inside. I am trying to pick a few classes out, and join in a group fun. Turned up my swimming to work off some deserts that seem to haunt me over the cold months.

I'm impressed, and I enjoyed the pictures. My running days are long over but I certainly did enjoy it 30 years ago. 3 miles only though....

This was a good post. So outside my own experience that it was fascinating to me.

Sounds like you did great! The camaraderie and support you received sound awesome too. Congrats! Are those your boys riding the bikes?

You set a new record for yourself!! Congratulations!! But wow, it was so grueling. I hope you are back to feeling normal now? How long did the whole thing take? I am so glad to see a post from you!! What do the boys want for Christmas?

Well I give you a heck of a lot of credit - that's a lot of miles to cover in a day, walking, jogging, whatever. Good for you - I can't use salonpas because they burn my skin.

You should be proud! What a huge feat and with that crazy wind! Way to go, Lisa!

Congrats! My hubby is a bad cramper on the bike. His remedy is pickle juice. He, and a lot of other cyclists swear by pickle juice.

I admire your fortitude with this race. It takes a lot of stamina to do what you did! My husband, son, and daughter went to Atlanta this past weekend to participate in their first Spartan race. They loved it. My son finished 63rd in over 2,600 participants. He is hooked for life, I think.

Fantastic! This is Truly Impressive.

I admire you! You should be very proud of what you have accomplished. And I am so happy that you had friends to accompany you.
Good job.
love
tweedles

Sounds awesome! That wind must have been brutal. Don't hurt yourself.

I love that you did the race. What a great bonus that you met such nice folks too. :)

Oh yeah, I forgot to say I would have not made one mile, hahaha, but I would have been happy to join you for the biscuit. ;)

That's so great that it was a positive experience. You really worked hard for it.

What a unique race for you! Sorry you had some issues, but it sounds like you gave it your very best and for that you should be proud. You're a superstar in my book!

running or walking, congrats to you!! love how the whole family is always involved. :) sweet..

Wow! I am impressed with your effort and the support your friends and family showed. Sounds like an amazing race and I am glad you hit your goal of the most miles. I loved hearing about the race and hope you are recovering well from all that running, walking, cramping, etc. :)
~Jess

So nice to have running partners cheering each other on

I still can't find the motivation to work out, seems so hard to get started. Still, not giving up!

Wow! Lisa you did great girl. So proud of you. I don't like that you were hurt but you're a trooper and keep going. That's a lot of miles!
Xoxo

Holy Cow, Girl... YOU are AMAZING... Whether you are running or walking, 46 miles is totally awesome.. SO proud of you... I've NEVER done any endurance training in my life and never started walking until a few years ago... The total miles I have EVER walked at one time was about 9..... These days, I'm happy with about 2-4 miles.... Guess I'm slowing down. CONGRATS.

I published a blog post today--so check it out when you have time.

I used to run! You run for all of us who cannot anymore!