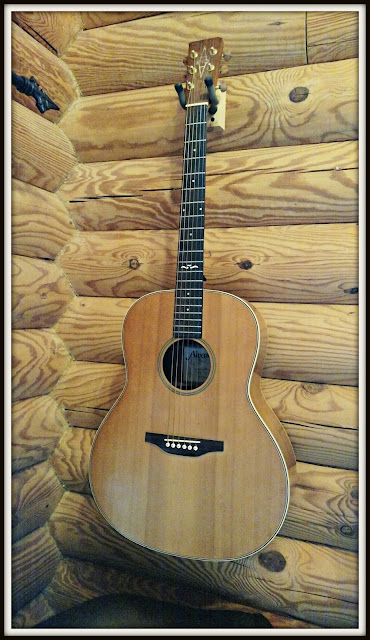 A stink bug flew into my guitar once and hit a couple strings but as I remember the were close to the same time not two separate ones. It could depend on what angle the bug hits.

I am reluctant to mention voices because you know what they say about hearing voices. But here goes anyway.
Years ago my husband and I were looking for an apartment to rent. We found one in a beautiful old Victorian house and the price was right. While we were looking at it, I heard a voice yell at me saying, "Get out! Get out now!" I grabbed my husband and ran. Out the door. In the car and away as fast as I could. Two or three days later there was an article in the local newspaper about some sort of weird happenings at that house, having to do with drugs and rituals. I have always been able to sense danger, but that was the one and only time I literally heard a warning.

I am an intuitive psychic so I am used to hearing all sorts of things, and anything considered 'out of the ordinary' does not surprise me. Whoever played those first notes also played these notes, maybe to let you know that they are still with you and wishing you well.

Your explanation is as good as any I think.... Lots of times we cannot explain weird things happening. I always say that our 'angels' are trying to say something to us. Maybe that guitar needs someone to play it..... ha

After my brother had been gone for about a year, one night I heard him say "I'm not really dead, Sally". If that was my imagination or something else, I felt better after that because my grief had been long and difficult.

Well, not sure, I think it's cool and a bit scary at the same time. One of my weird happenings was as a child and while sleeping in my bedroom upstairs, I heard my sister's rocking chair creak, so I ran down stairs to check it out. But mine was probably related to the fact that she had recently passed away, and they say we sometimes hear our loved ones being with us, because of a need inside of us. Our minds can play some pretty mysterious and cool things that's very true!

Wow, that was really something!

Oh my gosh! Did it really give you the creeps? I guess none of the strings had broken? I'm also wondering if a string could have just loosened? But of course that's not as good of a story. This is just so creepy!! Now you have a really spooky family ghost story.

Well, I think this is pretty interesting. Can't say I have had something similar happen, though.

Ooh, poltergeists! LOL. I don't have things supernatural happen but my daughter is sensitive and has "seen" ghostly things. Only she didn't literally see them, she sensed something and pictured it, if that makes sense.

But like Ginny said, the strings may have just loosened. They are under tension, after all.

Great story! I think it was Uncle Bill.

I have woke feeling someone next to my legs and live alone. I call it my ghost dog, but probably was a pillow.

I believe in this sort of thing happening.


When I was in 4th grade a friend of mine passed away. He had heart problems, had surgery, and didn't make it. I swore he showed up in my bedroom. It totally could have been my imagination, since I was a kid.

Another time I heard plop plop plop on the floor in the kitchen. I was convinced it was a ghost, or an intruder. It ended up that the ice in the fridge was stuck in the ice maker. It had melted enough that they plopped down.

Of course, when home alone....
YIKES!

that gives me the chills. I've smelled smoke off and on and no one else smells it. I've been smelling it since around 2007. I'm going to ask my new doctor if it could be related to my health issues. I smell it the most just before falling asleep.

When I was a little boy, we visited my grandma. She lived in a big old wood house that was built in the 1920's as a boarding house. My dad sent me out to the screened in porch to get my grandma her fan. When I got out there, a rocking chair was rocking all by itself.

"There are more things in heaven and earth...."

Wow, I love reading this post and everyone's answers. My husband at one time owned an upright bass. One of the strings snapped off with force while we were watching TV; his explanation was that the strings were old...

When I was a teenager staying overnight at my best friend's house, we were doing our homework when her radio suddenly turned on... I found it creepy, but heck, at least is didn't happen in my house!

I believe in ghosts. I've had other experiences but thankfully nothing really scary. I do think my deceased dad and grandmother will sometimes send me messages of comfort...sometimes through vivid dreams of them and sometimes through signs, like rainbows, that appear when I think of them... I should write a story about this sometime... Maybe someone was trying to say hello or give you a sign, or maybe the strings are old :)

Around here we attribute that sort of thing to Sukey Short, our local haint (ghost). Not the most scientifically satisfactory answer, but that would definitely be my first thought if it happened here. :)

Music is in the ear of the beholder!!!!!!
I hear sounds sometimes - they usually pan out to be mice!
Cute story.

Isn't this mild weather fabulous - we actually dined on the outdoor patio of a neighborhood restaurant for lunch yesterday - no coats or jackets required - just a treat for February!

oooh my...I have no further explanations but I guess it's a bit scary, at least for me :)

I did have an appliance turn on by itself one time. But a musical instrument is so much more intriguing and personal.

I think it sets the scene for a book. There's a story to be told there...don'tcha' think? :)

My uncle, who worked on cars in a workshop in the back of his house, passed away. He had been in a nursing home for a long time and his wife had moved to town a couple of years prior to his death. On the day of his funeral, the grinder out in his workshop started running. The house is out in the country, but the nearest neighbor heard it and called the family. I guess he had some unfinished work to get done.

My mom was still doing laundry for several months after her death. The washer would come on by itself.

I like to think these are signs from our loved ones that they are okay.

Good gracious! I wouldn't know what to think about that except maybe since it hs happened before it could be spirit event.