I don't pretend to be a birder, but I do love watching the birds and listening to their songs.  When we were in Tucson, I was continually amazed by the thriving bird population.  By far, my favorite was seeing a Great Horned owl family when hiking in Honeybee canyon.  I adore owls!  Here is a picture of one of the adults.  The baby was perched up on a rock, and I only had my cell so I could not zoom in to capture it.  Still, so wonderful to see. 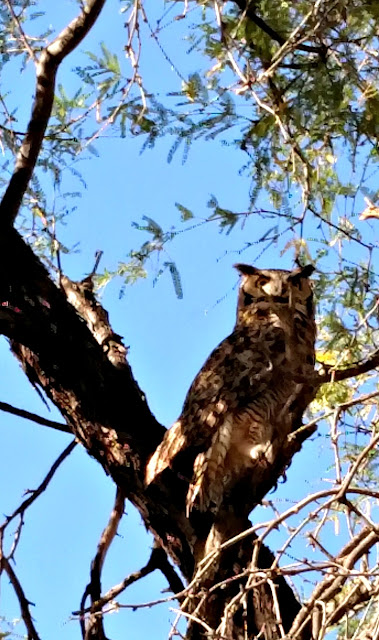 A palm tree in my in-laws' yard was hosting this mother dove with her two babies.  Aren't they beautiful? 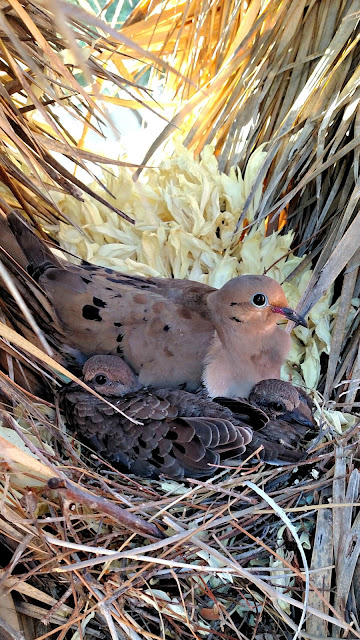 On our hikes, I loved seeing all the birds living in holes in the saguaro cacti.  Here, a crow sits up top.  He has quite the view. 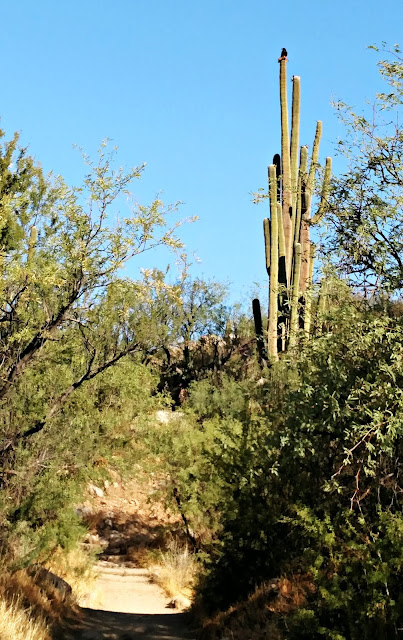 We also saw tons of roadrunners, but they were much too speedy for my cell phone.  I did catch this one on cell phone at the Arizona Sonora desert museum (more about that in a later post): 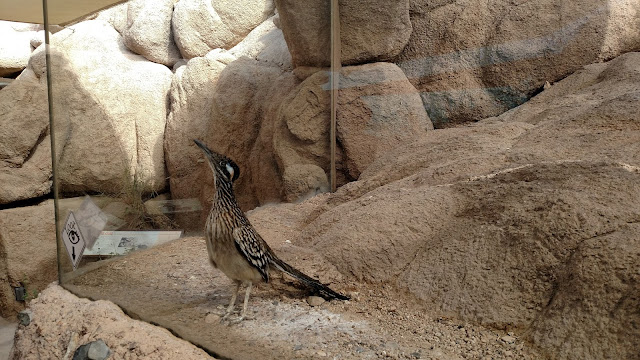 Finally, the quail families!  Oh they were everywhere and so cute!  One day, there was a bunch of distressed peeping coming from down in a storm drain in front of my in-laws' home.  We put down a ramp, but they didn't use it, and there were no parents to be seen.  So I got down in there. 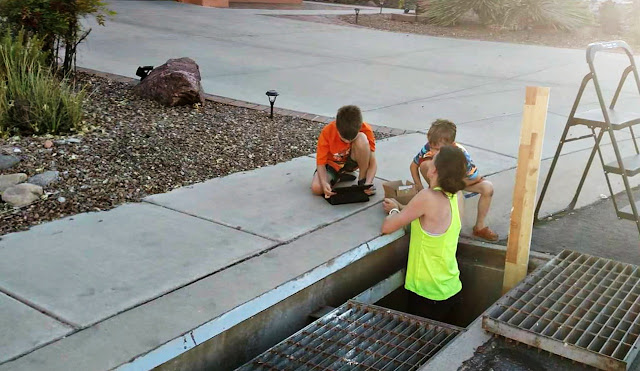 I used a pool skimming net to try to catch the baby quail.  I managed to pull up three before they took off down the drain pipe too far for intervention. 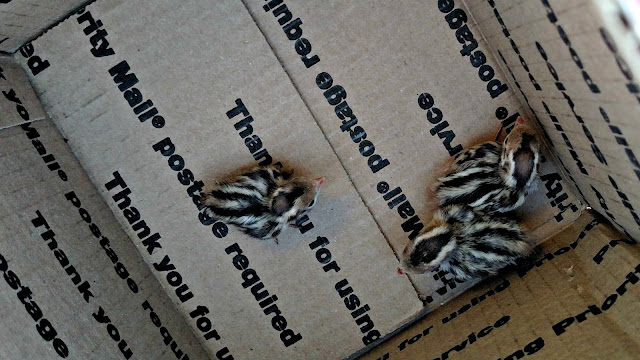 I set them into a region of desert where I had seen tons of other quail families.  I don't know if they were old enough to make it, but no doubt they had a better shot than down in a cement storm drain. 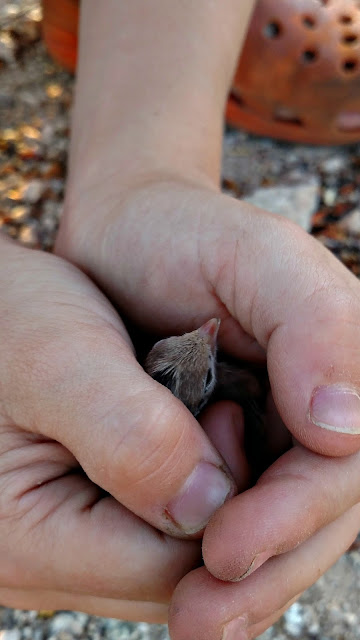 Readers, do you have a favorite bird?

...nice views of birds that I never see.

I like the birds that hunt insects in the garden, blue birds, wrens, fly catchers and others. I put sticks up for them to perch on or just leave a shovel stuck in the ground. I haven't seen many blue birds since early spring but the others are around.

Oh, some great photos! And, look at you being a heroine; not that I'm surprised at all, Lisa.

bluebird is my fav. I did my undergrad down there and played baseball

We have so many tropical birds around here that you'd think we'd be more excited about them. They're fun...except for when the big storks decide to take a stroll across the street and all the traffic has to stop for them. Because they don't pay attention. Or care. LOL.

Oh my gosh! We are birdwatchers, and these are wonderful!!! I have never seen a Roadrunner, but I guess watching the cartoons as a girl made me love them, and always want to see one. So I am excited that you saw one and posted it. You are also a hero to go down that storm drain!! The baby quails are adorable, and so pretty. Your shot of the Dove and her babies is gorgeous!! This is a Mourning Dove. The Great Horned Owl s a wonderful find!!

So various birds, interesting! Here in our home garden, We can hear so various bird singing, but never see the bird flying low. Only enjoy the natural 'song'

Aww, thank you for rescuing the baby quail! I loved seeing the baby doves too. Great post.

I think owls are the coolest of the bird families. Good for you trying to help the baby quails.....I hope they survived.

My favorite is simple - the eastern bluebird, of which we have many in our fields. Nice save!...

we have been to Arizona but never Tucson ... what precious birds .. so cute. hope you all are well. stopped in for a visit. take care and enjoy the rest of your summer. so quick. but i guess admit i look forward to fall temps. ( ;

Those babies are adorable and how sweet of you to go down and get them. Love the owl and it looks like you are having a great time.

Hooray! I'm glad you helped them. I hope they made it!

I love watching birds and owls. I have a wide variety of birds that visit me in my backyard. Your photos are great! :)
~Jess

I love watching them too. I don't see as many, since I live in a city though. I love owls.

I love all those pictures...always amazing to see wonderful creatures