Kayaking Down the James River

This summer when the boys were at camp for a week, Paul and I did a kayaking trip down the James River one day.  Paul dropped me and the kayak off around Horseshoe Bend in Buchanan, then drove to Twin River Outfitters, where they gave him a ride back. 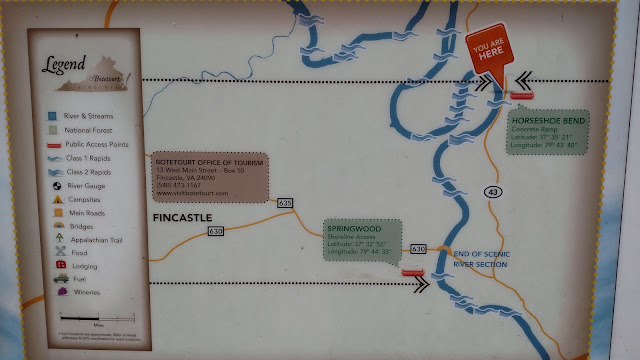 The trip covered what you see on the map, plus some, for about nine total miles of paddling.  Most of the rapids were class 1, but there were some class 2 rapids about 15 minutes in.  Luckily, the guy at Twin River told us to take the rapids all the way to the left.  We did so and were fine (the people just after us ended up capsizing when they didn't move far enough to the left to go over the ledge). 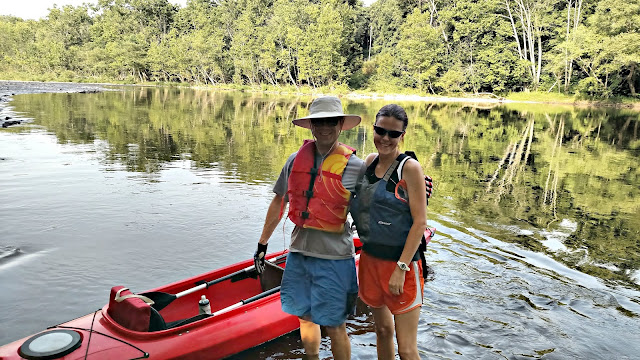 It was a beautiful day for kayaking.  We saw lots of fish in the river and birds.  Often, the railroad tracks ran right by the river. 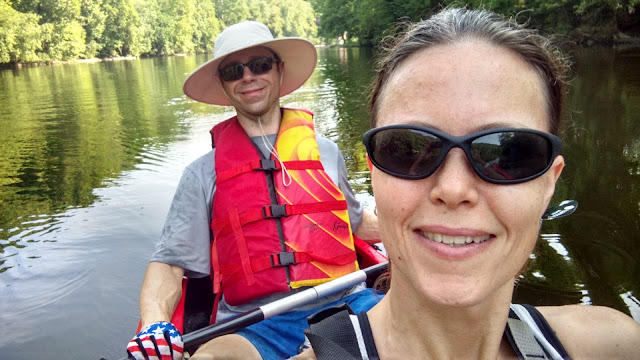 Paul and I would much rather go do some outdoor adventure than go out to eat or to the movies.  We've always loved to be out in nature. 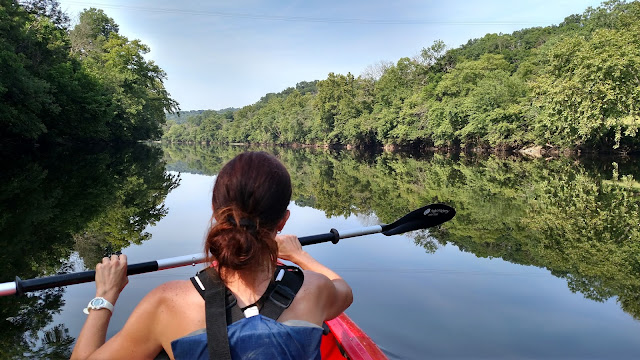 I had strained a shoulder the day before the trip doing some major garden weeding, and I was worried about how it would hold up.  But it performed fine.  I did lots of stretching throughout to keep it loose. 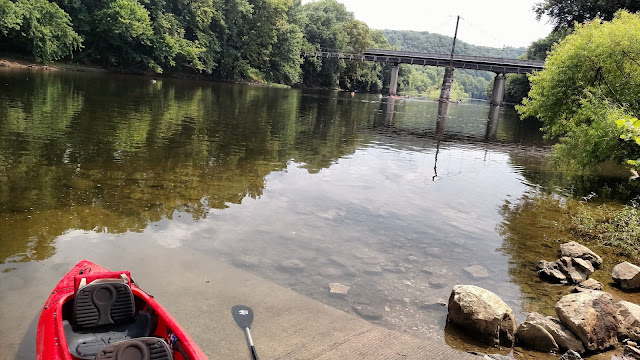 At our final destination, you could see a swinging bridge.  This bridge has been there for many years.  Paul and I decided to walk over to check it out once we got the gear loaded up. 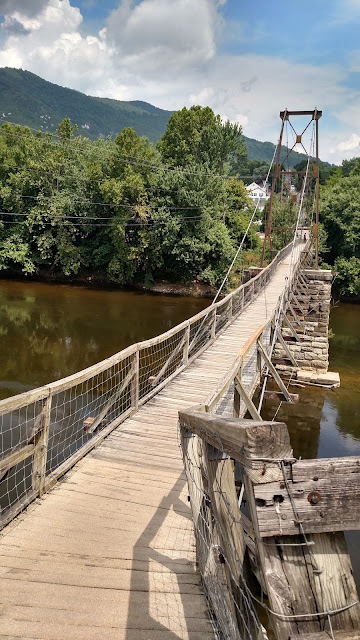 It's a little creepy.  I cannot imagine people riding horses over this thing.  It really did swing when we were crossing it.  But I guess back in the day people did ride horses and mules across, and paid a 5 cent toll to do so.  The original was built pre-Civil War, and burned by the Confederates in an attempt to prevent the Federal troops from crossing.  So it's been rebuilt a couple of times (there was also a flood that washed it out at one point). 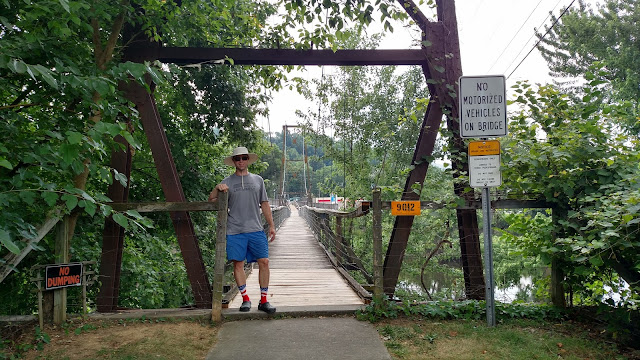 It was interesting to cross.  I can't imagine I would ever convince my horse Francie to do so though!
It was nice to get a day to get out without the boys.  We missed them tons, but we sure had fun without them for a few days.
﻿
﻿

I have walked that area while looking for telegraph insulators from the 1800s. Lots of hidden pieces of the canal system and much of the railroad is sitting on the original towpath. The swinging bridge was built on the stone supports that a covered bridge once sat. On the town side there are some huge stones where the canal boats docked near the bridge. Here is a link to a photo on the VT imagebase site of what the area looked like in the mid 1800s.
https://imagebase.lib.vt.edu/image_viewer.php?q=ns3598

Nice! DH and I used to have a pair of Dagger sea kayaks...we both miss them, but had to sell them off when we moved to TTX years ago.

Very nice river it looks. I want a two person kayak, but have put many miles on mine.Kind of like wanting a tandem bike, but needing that 2nd rider. That bridge is similar to many that were used to connect parts of a town divided by a gulch. I remember my first very well, a bit scary, but behind my grandparents home. .They filled in the gulch and have built homes behind there now Now it is a needed challenge when I learn of them.

What a lovely day! Like you, we like to get outside and DO something rather than sit in a movie or restaurant for dates. I think it's good to experience things together..and then you have something fun to talk to the kids about later.

Oh how fun! I'm glad your shoulder didn't mess you up, though.

I always enjoy your adventures! Hats off to you and Paul. :)

Everyone needs a fun break from their kids, to re-energize and do whatever you want. In my opinion, you are both made of strong stuff, like pioneer people! Doing this with an injured shoulder, then walking over the scary bridge! It looks pretty long, too! But for sure an adventure to remember!

Hi, I've never been kayaking ---but we have seen the James River and walked down to some locks while on the Blue Ridge Parkway (south of Skyline Drive)...

Like you two, we'd prefer to be outside in nature rather than going to a movie or something like that... That's why we love hiking...

That does look like a rickety swinging bridge for sure.... There are some of them in the Smokies and are SCARY to walk across. ha

A horse would need total confidence in the rider to walk across that thing!

That looks relaxing and fun!

The bridge is nice. I bet it was fun to cross. The history behind it is interesting. Glad you had some nice time with your husband. :)

Hi Lisa,
We love your WONDERFUL BLOG!!...
This one is an amazing post.
I love Mother Nature, Outdoor Adventures,
Animals & Wildlife.
You all look so happy enjoying your outdoor adventures.
God's everlasting blessings on your way...
Greetings from Poet Starry.

Loos like a fun kayaking adventure. I have never kayaked before- but it looks fun. Bravo for trying the bridge. Looks scary to me. :)
~Jess


pirates of the caribbean 5

I love a good and tranquil canoe adventure. Nice.

It's so important to be - just a couple - sometimes. Those look like perfect kayaking waters - and the bridge? Not my Opie, either... lol..

I use to live in Buchanan and crossed that very same bridge almost everyday to go to the library in town. Than I would have to walk up that huge hill back to home. Fun times!

Lisa, you have been doing all those wonderful outdoor activities! How I envy you and your loved ones...I have been stuck with the works since beginning of September and won't have a break till beginning of December :((..lucky me..