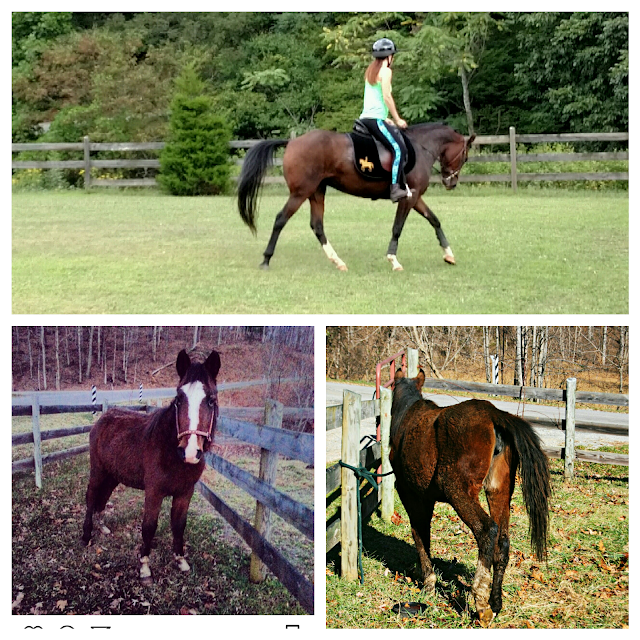 If I hadn't been there for every step of her transformation, I wouldn't believe these pictures.  She doesn't even look like the same horse!  I had to teach her everything, from the ground up.  There is still much work to be done under saddle.  She can be high strung most days, and something as small as a horse fly can cause extreme drama (I have never ridden a horse that despised horse flies as much as this mare).  Especially at the canter, Francie needs to work on balance, but we are also working on transitions and suppleness in other gaits.  As you can see, though, Francie is completely healthy and thriving.  I'm so thankful to have her.  She has been a huge comfort to me now that I can no longer ride Phoenix due to his debilitating arthritis.  On most days after we finish a ride, I feel like Francie is giving me more than I have ever given her.  I never would've guessed on the day I couldn't watch her suffer any more, and I stepped in to negotiate her rescue, that I was creating a bond with this little mare that would bring me so much happiness on down the road.  Sometimes, those impulse decisions really can be the best decisions.

What a difference you have made for her. She looks like a totally different horse.

What a beautiful and heartwarming story. There's a special place in heaven for a special person like you. Francie is a very lucky girl, as are you. Take care, Lynn

You have done a great job with Francie.. AND---I'm sure, as high strung as she is, that she appreciates the rescue!!!!! Congrats... Job well-done....

Wow. Her transformation and healing is dramatic! Thank you for taking the initiative to help her..and thank you to the owner who let her go live a better life. She is very, very lucky to have that chance...and a lovely, caring home to live.

Lisa dear, this story brought tears to my eyes.
What an amazing transformation. You are definitely Francie's human angel - what a long and difficult process to go through when she was in such dire straits when you adopted her. How sad to think her previous owner had allowed her to be living in such terrible conditions.

Bless you for having such a big heart. May Francie enjoy many years with your family, and you continue looking so good in the saddle!
Hugs - Mary

You have such a beautiful spirit, Lisa. She's beautiful, and I can hardly believe you've had her almost four years. :)

Surely a miraculous recovery, and dramatic pictures. You are the real deal, a Horse Whisperer! I remember when you got her, but not the circumstances. And because she is yours, I know she will live a long and healthy life now. Will you teach the boys to ride when they are older? You look like a natural on her!

What an amazing transformation. So glad she had you to rescue her. Doesn't even look like the same horse! Yay for both of you. :)
~Jess

Good job! I am happy for Francie.

I love stories like this, thank you for sharing your rescue of Francie with your readers - and wow, what a transformation. She is one lucky horse. Whatever happened to the horse/s that lived with her?

I don't have a trainer either and having pics and videos to see what we can improve on is the best self-teaching tool there is. You and I have similar "issues"... what I will say to you seeing that picture is the same thing I constantly have to say to myself.

Your heels are down, and leg position good! Sit back more, when you are down at the post make sure your jeans pockets are what you're sitting on, and soften your hands, relax your arms, bring back your shoulders, don't lean into the bends.

How's that for advice not asked for?..lol.. seriously... it's my mantra because I need ALL the above advice. Every. Time. I. Ride.

You did a great thing saving her. She has really recovered from her ordeal well. My daughter's rescue horse, Seamus, has blossomed too. He is too old to ride now, so he lives at a stable near her place in Cincinnati. She goes out and grooms him, and walks him. He is retired. When Elizabeth moves to Jacksonville, Florida Seamus is coming to live with us here!

Interesting! Ride the horse is my dream...

I remember being touched by this story. And now whenever I visit your blog, I think of Francie whether or not you're talking about her. It is a cool association as far as I'm concerned, and she does look beautiful!

She looks so beautiful. Gorgeous!

Wow!
I would like to know how to do that!
Very Good job!
Hugs from Brazil

You've turned her into a beauty Lisa! I love the transformation!

You have a large heart. What a wonderful transformation!