We decided to head in to meet the group for a run this morning. Paul wanted to back out at the last minute but he persevered. So we trekked down all the ice on our driveway yet again. The twins got all snuggled up in their Tigger and Pooh suits for the run, because it was cold out this morning. 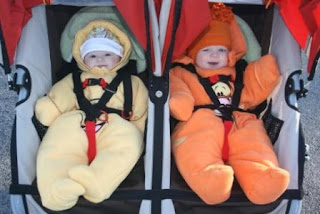 In fact, I was to see two people wipe out on black ice during the run. Here is a picture of the five of us, weathershields over the strollers to keep out the wind. 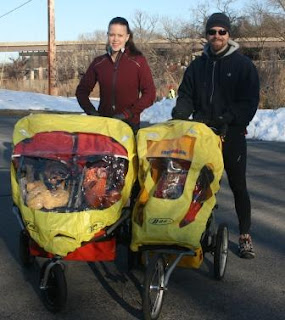 This is Steve, Katie, and Paul. 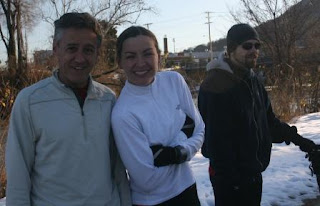 Steve is a track junkie. If it weren't for him, I would've never cut 15 minutes off my last marathon. He met me at the track during blistering 25* cold winds and brutally hot 95* temps. Week after week he talked me through mile repeats. He was the one doing all the talking...I was always just trying to gasp for air. But those track workouts really paid off. I can't believe I sort of miss it. Hopefully I'll get out there again this spring. And Katie just finished her first marathon in Charlotte. She broke 4 hours! So impressive for a first marathon!
Here are Ed and Joan, with their daughter Jamie (in town from Atlanta). 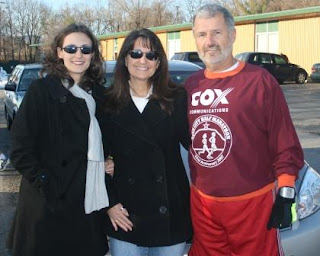 I was hoping Joan would be running, but she and Jamie were headed out to visit family.
And this is Frank. 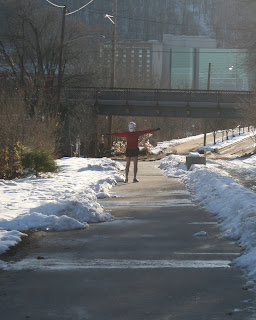 I think he's having one of those pre-run Zen moments.
As usual lately, I fell pitifully behind. And Reid cried forever. He hates wearing the tigger suit - but it really does keep him warm. Falling behind gave me a good chance to get a shot of some of the group headed back as they passed me. 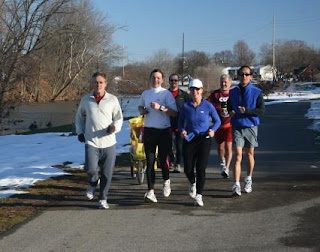 I need to do some speedwork so I can start keeping up! I miss the banter of running with the others. Hopefully by spring.

You guys amaze me. And totally make my "can't cuz of the kids excuse" look like what it is- bullcrap. Keep it up!!