A Tale of Two Pizzas

I've been making semi-homemade pizzas for a couple of months now. It's simple, cheap, and delicious. I say semi-homemade because I buy dough by the case at Sam's. For a case of 20 balls of frozen dough it is a mere $16. Each ball of dough makes the crust for two pizzas! When I stopped working full time, I began searching for cost effective ways of eating, as our grocery bill was the biggest bill we had (other than the mortgage) each month. Even with using creative ingredients, these pizzas end up being about one dollar each. And we always get several meals out of them.
We usually eat around 5:45 so I begin by taking a dough ball out of the freezer around 10:00 am. I put it in a metal bowl that is lightly greased and place saran wrap over top. Around 4:00 I split the ball in two and stretch it out on two baking stones sprinkled with flour so it doesn't stick. At 4:30 I roll it out, let it rest, and roll it again around 5:00. 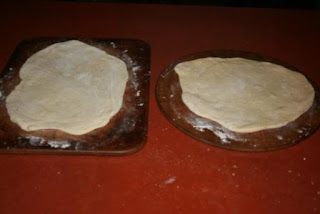 I topped the pizza with pesto, which I found is actually cheaper to buy premade at Sam's than to make from scratch (because it uses expensive ingredients). On top of the pesto, I sprinkle finely shredded four cheese combo.

I often caramelize onions for the pizza. This is really simple. Pour a small amount of olive oil in a skillet and heat on medium-high. Slice an onion thinly and add to olive oil. After a few minutes I add a little sugar and salt. Stir so that they brown on all sides. This time I added in some sliced mushrooms after about 10 minutes. 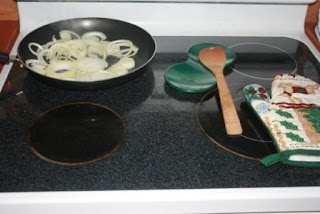 Bake at 425* for 20 minutes. If you use red sauce instead of pesto, baking time is less because pesto has so much oil in it. 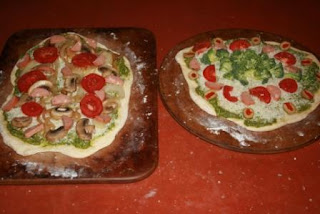 Pierce loves broccoli so I made him a broccoli brontosaurus on his pizza. He also likes tomatoes and olives. The sausage is actually chicken mozzarella sausage. It's in the refridgerated section of Sam's Club. The other pizza has the onions, mushrooms, tomatoes and sausage. Delish!

Shhhhhh. Don't tell anyone. I ordered from Ebay some new/used Thomas stuff for Pierce to find on Christmas morning. It arrived very quickly! He and Paul build huge train railways every day. Fun to see what they create! 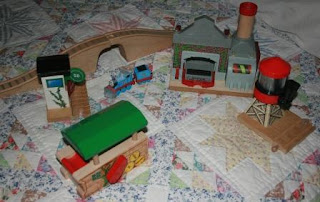