The Battle of the Bugs

The Terminex man knows where I live.  I think he recognizes my voice when I call.  "Oh, it's HER again."  He even jokes about how much time he spends at our house.  Trying to eradicate the stinkbugs.  Oh, sometimes I call him about ants.  Or wood borer bees.  And there was the big wolf spider infestation of Fall 2009 incident.  But mostly we keep him in business with stink bug eradication. 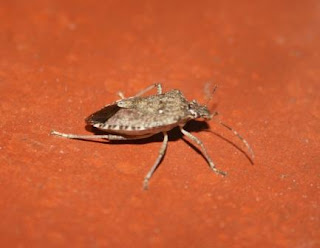 The biggest problem with stink bugs (besides the fact that they don't die easily from Terminex's not-so-lethal cocktails) is that you can't just stomp on them like a regular bug.  Because they squirt out a stink if you do.  A gagging, cloying, nasty stink.  It'll drive you nuts this stink.

I think we have a breeding colony here.  I really do. 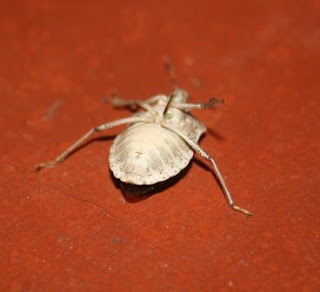 Belly up.  The best way for a stink bug to be.

Often, Paul and I have contests.  To see who can kill the most stink bugs in one day.  We frequently get deep into the double digits.

The best way we've found to tackle stink bugs is with the vacuum.  Just suck them up.  Because then you don't get stink bug stink on you.  It's in the vacuum instead. 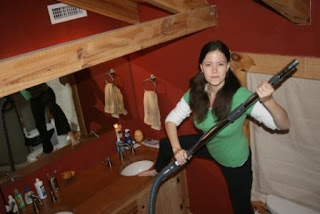 Armed and dangerous.  The breeding colony is primarily in the master bathroom.  They love it up there.  I don't know why.  It's the New York City of stink bugs. 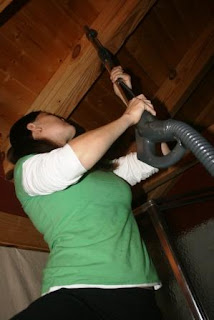 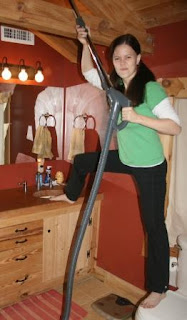 I've never felt such serial killer tendancies as I have against the stink bugs.  The stink bugs have an FBI profiler head bug just devoted to profiling me.  I'm really scared of his conclusions.  Because I don't show any signs of remorse.  Not one bit.

You are hilarious! I love the action stances!