My Struggle to Feed the Twins

When I was pregnant with Pierce, I took a breastfeeding class.  The class was very informative in a light way.  I felt prepared.  And then I had Pierce at 38 weeks (induction due to preeclampsia) and he was a growth restricted 5 lbs. 11 ounces.  Perhaps because he was small, or perhaps for some other reason, he didn't nurse very well.  I tried.  I tried so hard.  It broke my heart to watch him screaming and crying, beating me with his little fists, yet refusing to latch on.  I can't began to explain how emotional this was for me.  I went to see the lactation consultants.  I even had one come to the house.  We tried various holds, even tried a breast shield to get him to eat.  There were a lot of tears, from both of us.  Meanwhile, I was pumping to supplement with bottles because he'd lost weight and he was so small to start.  I never gave up.  Some days would involve more attempts than others, just depending on how strong I was feeling.  But every day we tried at least once.  It took THREE months but Pierce did learn to breastfeed. 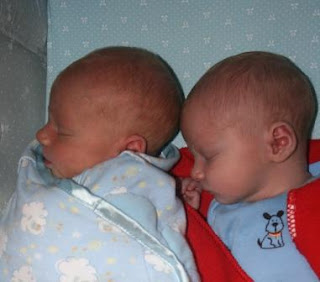 When I was pregnant with the twins I spent a lot of time hoping that they would both be easier than Pierce.  Right after birth, Reid latched on, ate, and then burped himself.  He's always been thrilled to eat.  I think he gets that from me ;-)  Cort was different.  He didn't really try much to eat.  This time around, I was lucky enough to have a baby scale at home, thanks to my friend Ginger.  So when he was not eating and losing weight I got him to the lactation consultant the very next day.  It was really something.  I had three lactation consultants working to get the boys latched on.  They did and sent us home.  But at home I didn't have three experts helping me out.  And things with Cort went downhill again.  I cried at least ten times one day over it, scared that it would take as long as it had with Pierce to get him breastfeeding.  We went back to the lactation consultants and they were so devoted to helping me.  One of them made about 5 calls to track down a supplemental nursing system (SNS).  Then she drove it partway to our house for Paul to go pick up.  This contraption fits around the neck and you can deliver extra milk through tubes to the nursing babies so they don't have to work so hard.  It was great in theory, but Cort was such a weak nurser it really didn't help.  They said he was more like a 35 week old baby than a 38 weeker.  I called my doula and she suggested not supplementing with bottles as I had been, but using an eye dropper instead.  Here I am patiently (it took forever!) feeding Cort with pumped breastmilk: 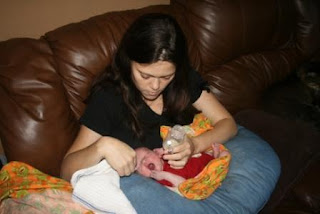 My doula had promised that 24 hours of this sort of feeding would give Cort a fresh start and make him forget about bottle feeding.
All together, it took about 3 weeks of struggle to get Cort reliably nursing without a fight.  I found that he did better nursing on his own, because he was so distracted by having Reid near him.  I can say today that it was one of the most worthwhile struggles I've been through in my life.  I'm so thankful that both boys will nurse.  Cort, in particular, is not a snuggly baby because he's so active, so being able to bond with him in his feedings has been really important.  And Reid would continue to eat all day if I'd let him ;-)

Lisa, you are such an inspiration. I gave up trying to breastfeed after six days. Too many tears on both sides of it. But reading this makes me want to keep trying. I can't believe it took you 3 months to get Pierce to latch... I guess there is always hope. :-)

Meredith, it's definitely not too late for Grady. There's certainly hope if you want to keep trying...and let me say how amazingly worth it it was for me. I'm not an expert or anything, but what worked best for us was just trying once a day, during a time we were both relaxed and Pierce/Cort wasn't too hungry (that way they didn't get frustrated by hunger). It's in their nature to snuggle and suckle, so I'd guess that eventually Grady would take to it if you wanted to keep trying. :-)

I love stories like this. I so appreciate the commitment to doing what is best for your child. I know I only partially understand the emotional agony you must have been in, I am a mother, and I can imagine.

So I am just here to salute you, to say YES it was worth it, and keep it up! Share your story with women who are struggling, maybe it will keep them trying another day or another week.

Thanks, Mama Goose! Yes, it is heartbreaking when something that is revered as being so natural and easy comes with such difficulty. I think having been through it before with Pierce made me more determined to make it happen early on with Cort (and to seek out help immediately), which also helped. The bonding that comes from breastfeeding makes every second of the struggle and every tear worth it. :-)

Love this post. Just now reading it but based on the date I had just had a baby when you wrote it. ;) Good for you for sticking with it. You should be proud!

Just now reading this! Such a great post. Good for you for sticking with it!