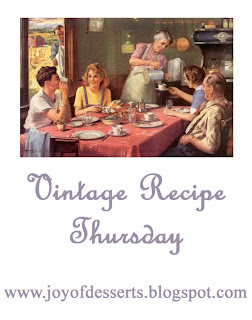 This Meme comes from:
Joy of Desserts
For today's Meme I thought a vintage recipe sounded fun.  I've blogged before that I have several of my grandmother Lin Lin's cookbooks.  This one is my favorite: 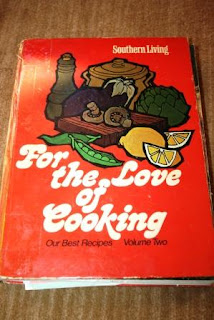 It's stuffed full of loose recipes that she had clipped from magazines.  And in places, there are her handwritten recipes.  Yesterday I went digging through old photo books to try to find a picture of myself as a child with Lin Lin.  I was disappointed not to come up with anything.  Hopefully my parents have a few around.  In the meantime, here is a picture of Lin Lin and Chief: 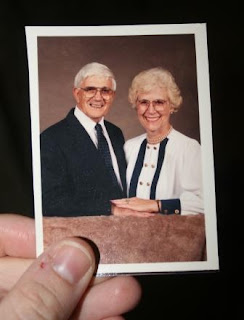 The recipe I chose is written in the back of the cookbook. 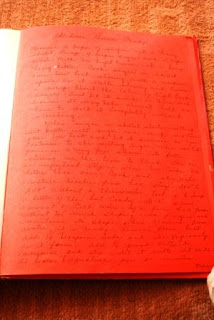 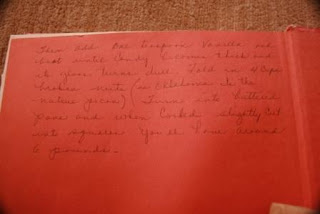 As you can see, it didn't photograph very well because of the red paper.  So I typed it out as well.
Lin Lin’s Oklahoma Brown Candy

Measure 2 cups of sugar into a heavy skillet. Dump 4 cups of sugar and 2 cups whole milk or light cream into a heavy kettle. Cook sugar in skillet over low heat, stirring with a wooden spoon as it melts slowly and becomes a syrup about the color of light brown sugar (don’t let it smoke or turn dark brown). It may take almost half an hour to melt it completely without scorching.


When sugar in skillet starts melting, set kettle with sugar and milk mixture over low heat and let it simmer as you continue to stir melting sugar. When melted, pour in a very fine stream into kettle, stirring all the time to blend. This is an important step – where two cooks are better than one. Cook and stir until 248*. Without a thermometer, test it to drop a little of the hot candy into a small amount of cold water. If a firm ball forms without too much shaping with fingers and maintains its shape when removed from water, it is ready. Remove from heat, add ¼ tsp. soda and stir vigorously as it foams. Add ¼ pound of butter and stir until it melts. Set aside at room temperature for 20 minutes. Then add one tsp. vanilla and beat until candy becomes thick and its gloss turns dull. Fold in 4 cups broken nuts (in Oklahoma it’s the native pecan). Turn into buttered pans and when cooled slightly cut into squares. You’ll have around 6 pounds.

I love how she talks about how two cooks are better than one.  Just the word kettle feels vintage, doesn't it?  I haven't actually made this.  Truth be told, I'm a little intimidated by recipes that involve thermometers.  But one of these days I have no doubt I'll give this a shot.  Who wouldn't like SIX POUNDS of sugar?

Oh what memories of Lin Lin's Oklahoma Brown Candy! It was my request every Christmas. If you make it someday, please send me a piece.

You CANNOT make Oklahoma brown alone. Trust me. You need a huge cast iron skillet and big big muscles to stir. The whole shebang weighs about a hundred pounds and it takes forever. You need a helper and at least 2 undisturbed hours to do this. But it is absolutely superb if it turns out right.
lovemom

Well, I do have a memory to share. LinLin and I made this together one time. We laughed our heads off over beating that candy. One person would hold the skillet and the other would beat. Then we would switch. Seemed to take forever. LinLin kept saying "I hope this turns out". Evidently, the failure rate is pretty high if you make it during rain, which is what we were doing. But it was wonderful.
mom

Thank you so much for participating in Vintage Recipe Thursday. This is such a wonderful post with memories, and a great recipe. It is so hard to find candy made with real sugar these days, too, and an authentic Southern Grandma's recipe is bound to taste so good.