Muffin Tin Monday - Blue and Purple. Plus, What the heck is a Chicken Tractor?

Today is Muffin Tin Monday.  The theme is blue and purple. Tricky, tricky!  We managed to create a tin though. 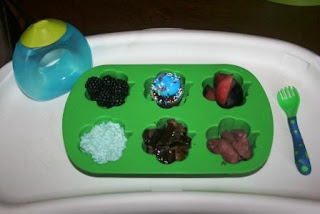 We had blackberries, a mini cupcake with blue frosting (disclaimer: not added to tray until he ate the other stuff!), plum, mashed cauliflower with blue tinting, roasted eggplant, and ham.
Want to participate in MTM? 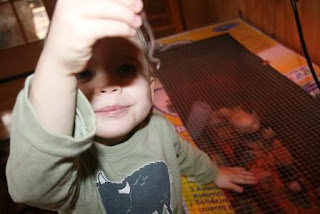 But eventually the chickens got big.  And smelly, and they started to run out of room in their box.  So once the chicken tractor got close to completion, we moved them outdoors. 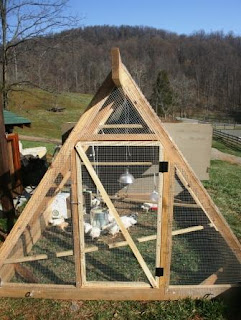 See that wood overhang right over the door?  I promptly stood up into that and just about knocked myself out.  Paul sawed it off, thankfully.
Right now, the chicken tractor is covered with insulation because it's cold out.
Also, our electricity went out for 4 hours in the middle of the night the other night, so the chickens didn't have their heat lamp.  And it was cold.  So we lost one of our layers :-(
Hopefully that won't happen again.

Thanks for checking out my mtm post. I've answered your question under your question. Love your muffin tin this week, I got the theme wrong this time! Love your chook coop too!

Eggplant was a good idea! I have never seen a chicken tractor before.

I found out it's called a 'tractor" because the chickens till, weed, and fertilize the soil as you move it along. So we'll have patches of green grass...nothing new for our yard.

That Muffin Tin deal is a great idea! Sounds like a good little meal :)

2nd. wait. ok. so you move it around so you don't have to clean it out? um. do chickens poop? man. they just don't lay eggs?