On Sunday we had a marvelous break in the weather.  Pierce and I had tickets for Family Fun Day at the Jefferson Center, and I was almost sorry because I wanted to be outside.  Because you know, it's not often it's not 20* and snowing lately.  But off to the Jefferson Center we went, and I'm glad we did.  Well, mostly glad we did (I'll elaborate on that shortly). 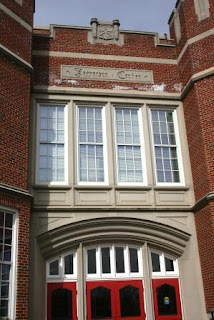 The first thing Pierce did was climb up into the firetruck. 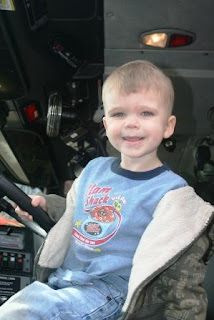 He had to 'drive' the firetruck before we could go inside.
Once we got inside, he was all about getting his face painted.  Wouldn't even look at anything else until he got his face painted.  So there was ONE lady doing face painting.  And this big line of kids.  I wish I could say that Pierce was not like the usual toddler and didn't mind waiting in lines.  But that would be a BIG FAT LIE.  You know those velvet divider ropes to portion off a line of people?  Yeah, he knocked those down TWICE.  And tried to run off several times.  And then.  Are you ready for this?  Pierce grabbed the BUTT of the lady in front of us and said in a rather loud voice, "WHAT'S THAT?"
I wanted to die.  Right then and there.
While I tried to tell Pierce that wasn't nice and apologize to the lady, she was busy giving me the evil eye.  You know...that evil eye that translates to, "You don't deserve to be a parent"
Somehow, I survived this embarrasment without leaving and going to hide in the bathroom stall.
And Pierce got his face painted.
He had gone on and on and on for 30 Loooooonnnng line minutes about how he was going to be a bengal tiger.
But of course, once he got in the chair, he refused to close his eyes to get painted as a tiger.
So he had to settle for a snake.
The paints: 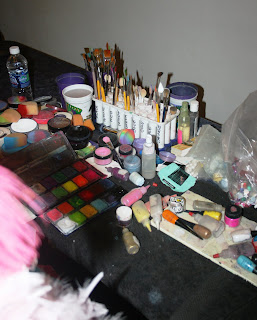 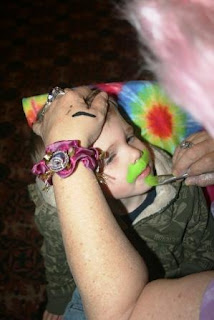 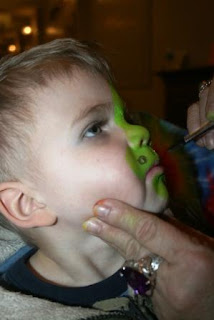 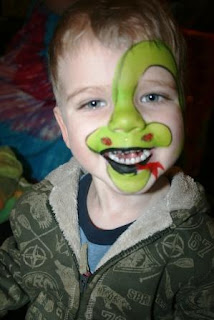 After I survived face painting, we headed off to listen to some folk music, jump in an inflatable bouncer, watch a puppet show, make our own buttons, pet a hedgehog, and have our names written in Chinese calligraphy. 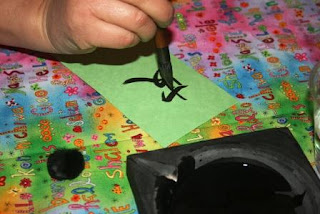 Not a bad day.  Overall.
I'm done with waiting in lines with a toddler though for the next 5 months or so.  I'm thinking that's how long it'll take me to recover.

The snake is probably the most awesome face painting I have ever seen! Very cool!

LOL. Well, must have been embarrassing for both adults at the time, but if she got offended by a young child, it's more a reflection of her than of you or your son. :-) What a great day full of fun.

Love that little snakey face. I also loved the butt grab! The joys of a toddler.