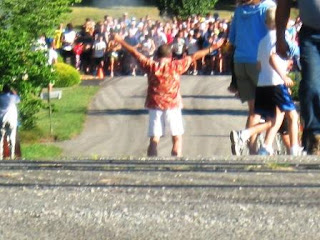 On July 3rd I ran a local race.  It's normally held on the 4th, but since the 4th was on a Sunday this year they had the race the day before.  We (thankfully) had a little break in the weather so it wasn't as dreadfully hot as normal.
This race was a 5K.  I don't generally like 5Ks, as I'm not a speedy person, but they do serve for an excellent speed workout.  This was my first 5K since the twins so I didn't expect much from it.
The race went well enough.  I tried to keep my friend Trina in sight, as she was just ahead of me, but I lost her after the first mile.  I got to scope out a few yard sales along the route.
My ob/gyn, who is a runner (why else would I have picked him? ;-)) passed me around the halfway point.  He had been running with his kids.  He has 10 of them! 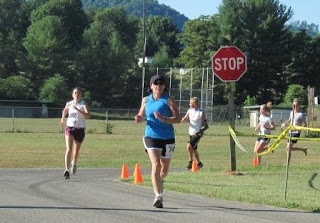 I'm in the white tank w/ purple shorts.
At the start of mile 2 I had to see two different teenagers puking.  I tried to shield my eyes.  I am the world's biggest puke wuss and I hate to see/hear/smell/think about it.
I stayed pretty consistent throughout I think.  I hit mile 1 at 8:10, mile 2 at 16:50 and mile 3 at ????  What?  I don't know my time?
Nope.  No clue.  See, I don't wear a watch to run.  I get picked on a lot because of this, but I don't want to be constantly worrying about it.  I run by 'feel'.  That's good enough for me.  But I do like to know my time at the end of the race.  I can say with assurance that I was faster than my personal 5K worst (29:11) and slower than my personal best (23:00).  I was somewhere in the 25 minute time zone.
But what about the time clock?  Nope, no time clock at this race.  And there was a guy doing the timing as I crossed the finish, but he wasn't yelling out the time for me.
But what about the online results?  Right.  Well, that's where I expected to find out my time.  So I started checking the results online the next day.  Nothing.  Nothing the day after that.  Or the day after that.  Finally, a week later, I found some results.  They said MEN'S RESULTS.  But where were the women's results?  Ah yes, a little footnote said, "Women's results coming soon".  Um, is putting race results in a pdf file rocket science?  I mean, I don't know, I've never tried it, but it must be very, very technical, huh?

I think your personal worse 5K time is better than my personal best!

I see 'em posted now but, unfortunately, they are not correct. Trina said her's showed her a full 2 minutes slower than she really ran. Me, man I wish I ran an 18:53, but alas, I did not crack 19. I talked to Jim about the clock. It was ready but no one came to pick it up. I still love this race though, its still the best around IMHO. You did great, no puking or passing out from lack of oxygen! :-)

Running without a watch? Why, that's like blogging without a comments section! Hee! Good for you to keep perspective on why you're running in the first place, and not get obsessed about times.