Nothing Rosie about Roseola

Last week Reid had a fever of 102* one day.  He seemed mostly okay (other than an episode of diarrhea), so I wasn't terribly concerned.  I put him to bed with some ibuprofin.  He woke up at a rather early hour screaming.  When I went to check on him, his fever was 104.3*!  Now that's cause for concern!  He had no other symptoms, besides the fever and slightly swollen eyelids.
Last time we had a spiked fever like this with no symptoms it was Pierce, and he had pneumonia.  So I was certainly worried as Paul took Reid to the pediatrician (I was teaching class that morning).
The pediatrician diagnosed Reid with roseola.
Apparently, it strikes babies between 6-18 months and is highly contagious.
Hallmark symptoms are a high fever, swollen eyelids, sometimes diarrhea, and finally a rash.
The fever lasted for several days, during which Reid was fussy but okay.
This weekend the fever broke, and the rash set in: 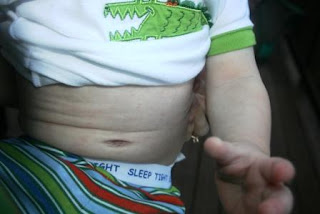 A little hard to see in the picture; the rash is only on his belly and back.
Roseola is a funny virus, in that it takes 1-2 weeks to incubate.  So I guess next week sometime there's a very high chance we'll be going through the same deal with Cort.
Bummer.
But...at least they don't have to take antibiotics with it.

Poor little fella! Yeah I know it is no fun having Roseola, Mad had it when she was about 18 months or so. Her rash got bad!! No other symptoms besides being a little cranky and slight fever.
Good luck and hope it goes away quickly and that Cort somehow skips it!

Sad, but he'll be well soon! My boys each got it, and its so alarming when you first notice it!!!

Ugh...I remember it. It will pass just in time for the next junk that's going around! Don't worry, eventually it seems to be less often.

Awww, poor little dude!! Both Landon and Garrett got roseola and I felt so bad for both of them. They didn't seem to be uncomfortable from the rash though. Hope he feels better soon (and that it doesn't spread to anyone else!)

My second had this, such a weird thing huh! So glad he is better now. Maybe you will get really really lucky & it will miss Cort all together. I've got my fingers crossed for you.