On Weaning the Twins, Sniff

The twins turned 13 months last week.  It's hard to believe how quickly the time seems to go lately.  With 13 months came a very big milestone.
I finally weaned the twins.
It was hard.
Much harder on me than on them, I think.  Pierce weaned himself, so I didn't have to go through this with him.  Part of the reluctance on my part was that breastfeeding was something we fought so hard to make happen.  You can read about it HERE.
And part of it was that these are my last babies, and so it was sad letting go. 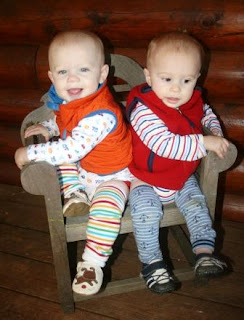 After our initial struggle, I feel fortunate to have had such a successful run of it with them.  I was lucky.  Truly.
So over the past month or so, we've been gradually dropping feedings, one a week.
Until, sadly, they were all eliminated.
The twins are still getting some of the good stuff from the deep freezer.  We have about enough to get them through another month or two if we feed from the supply twice a day.
They haven't faired to well with whole milk (stomach issues), so for now we're also feeding them vanilla soy milk.  Cort, who has a sweet tooth, took right to it.  Reid isn't so sure.  Hopefully it'll grow on him. 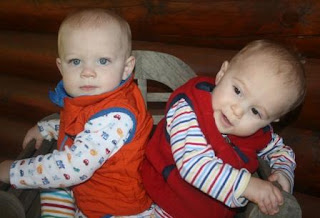 I know some people might ask why push weaning at all?  It was just time for us.  The twins were more distracted and restless during feedings, and I knew that the amount of solids they eat on a daily basis is sufficient for them.  Physically, feeding two boys was really taking a toll on me.  As my running distances grow longer, my body was not recovering well at all, and I was having significant deep joint pain.  The production of milk really has a toll on a mom, particularly in duplicate.  Happily, just a couple of days after weaning I went for a 15 mile run, and felt so much lighter and faster.  My body recovered without any of the pain I had grown used to, and even though it was an increase in distance, it was the best run I've had in the past 2 years.
And so, although it doesn't necessarily make it any less hurtful, I think it was the right decision.
As for the twins, well, you can see from the pictures that they are none the worse for it ;-)

I admire any woman who can breastfeed their babies for a long time. At 3 months we found that Buddha was not gaining any weight what so ever. It was devastating for me, to realize my poor baby was starving (turns out it was the reason for him screaming his head off at all hours of the night while even while I was rocking him, holding him and doing all the soothing - he and I were both very sleep deprived for several weeks until we discovered this). We started supplementing per the pediatrician and he started sleeping longer periods of time. So I admire your perseverance with twins!

Oh, how bittersweet. Your post makes me teary because I remember the time when Livie was weaned. Knowing "the time has come" but at the same time, a little sad that the experience is over.

weaning...I can completely relate. I weaned my first at about 15-16 months...It actually did take a good month so I wouldn't be in pain and so he would get used to fewer and fewer feedings and then it was like he just forgot. My baby is 11 months old and never took to a bottle, so I think he will be harder. Since I'm not sure if we'll have a 3rd, I really want to hold on this this time in his life...but I hear you about running. I have tried to get into running bc many of my friends are, but holding all this milk and running do not mix very well...I think I'll wait til he's weaned to try it again.

Oh my gosh they are absolutely adorable! There is definitely something about twins that makes them even cuter! Great job Mama on the nursing. I am in awe of you & how you managed 2 for so long.