It's been a while since I've joined in on Vintage Recipe Thursday over at Joy of Desserts.
Today's recipe is for Deluxe Banana Pudding.
This is my grandmother Lin Lin's recipe, and is handwritten in the front of one of her Southern Living cookbooks. 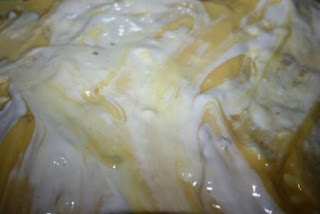 Mix 3 regular or 2 large boxes of instant vanilla pudding with 5 cups of milk.  Fold in 1 cup of sour cream and half a 9 ounce carton of whipped topping.  Layer in a large glass dish, starting with coarsely crumbled vanilla wafers, a layer of sliced bananas, then half of the pudding mixture.  Repeat the whole thing one more time.  Cover with remaining whipped topping and chill.
I've 'skinnied' this up many times by using 1% milk, fat free sour cream, fat free cool whip, and reduced fat vanilla wafers.  It does just fine with the substitutions. 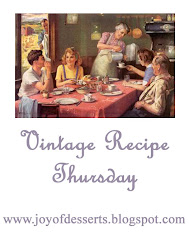 Fat or skinny this sounds great!

I wish I could say "yum" but banana isn't one of my favorites! Perhaps, tapioca, custard, butterscotch????...:)JP

What can I use to substitute for the bananas?

I find that just about every man loves this banana pudding dessert. I think it reminds them of being little boys. I have whipped this up for my hubby and his work buddies numerous times and am always returned a glass dish that has practically been licked clean, LOL. Happy New Year! :o)

Magnificent! I love that stuff! My wife makes it every now and then and oh my...

I've never had this with sour cream and it's been a long time since I had it. I've been craving it and might give this recipe a try. Thank you!

It was nice of you to visit me. I became your newest follower today and will come back from time to time to visit you. I love making new friends and learning about other blogging friend's lives.

Happy New Year to you and yours :-)

yum! My husband would love this too!!!