I had a good month in December for fitness.  Usually in the 'dark months' I have pretty low mileage, but this month I didn't slack off as much as usual.
Total running mileage = 100
Weightlifting x 7
Abs/Core workouts x 8
Yoga x 2
Marta Montenegro dvd (similar to Shred) x 1
Most of my runs were done on the treadmill (boo!) but here is a picture Paul took after I ran 10 miles in some crazy snow: 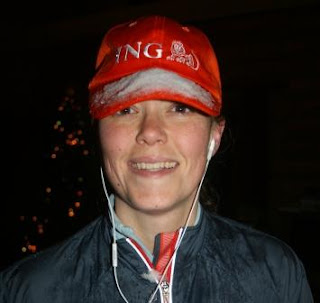 Paul thought all the snow on my hat was funny.
Looking back on 2010, I ran 3 half marathons, one 10 miler, three 5Ks, and of course the NYC marathon.  Much of the year was spent trying to regain fitness after having the twins.  I am finally starting to see my runs improve, although I'm nowhere close in speed to where I was just prior to getting pregnant with the twins.  My total running mileage for 2010 is 1043 miles.  I'm pleased with this, particularly considering it was a comeback year and I didn't run at all last February due to postpartum depression.
So for 2011 I have just a few small goals.  First, I'd like to PR (set a personal record) in the half marathon.  Why the half?  Well, mostly because it's the most 'doable' race.  Two summers ago when I was at my fastest, I ran all sorts of distances but not any halfs.  So my half marathon PR is from three summers ago, and I'm really only a couple of minutes away from the PR as it is (according to the half I ran in November).  My second goal is to run the Portland Maine Marathon next October.  My Dad read an article about that race and said that I should run it because it sounded fun.  He said he'd go with me if I did.  It's a smaller marathon, but sounds like it's well organized and low key.  So I'll be saving money for that and will start training next summer.  My third goal is to spend more time at the track this year than I did last year (that shouldn't be hard).  I definitely want to get faster in 2011, and I know what I need to do - and that's go to the track!
Do you have goals - fitness or personal - for 2011?

I woke up at 5 this morning thinking of you and the seed you planted couple weeks ago about thinking of goals we should be making for the New Year...
Sounds like you have a goal that wants to take you to Maine. I thought about it and Dave and I are going to Sweden in May and I would like to lose another 25 pounds. So I have this walking dvd exercise that you can do walking in a very small area.. I got it out and it's sitting here waiting for me to start.. So That will be my goal for 2011..exercising and losing weight and get my diabetic sugar back in order...Thanks for the wake up call...lol
ta ta for now from Iowa

Oh wow! I can't even imagine doing this much. Last summer I was on a half marathon training program--strictly treadmill (only way with all the kiddos at this point). I only got up to 7 or 8 miles I can't remember. My treadmill broke and by the time we got it fixed I was pregnant and feeling horrible. I need to get back on it...

Hey! You got the DVDs? And completed one of them? Oy. I'm so not on track already. And it's only day one! Actually, I'm getting there - you're such an inspiration. But what's up w/you going to my home state to run, and now my husband's? He's from Maine! Crazy! ;>

awesome goal! A friend of mine did Portland ME last year and said it was great! She set a PR. As for goals, I too want to PR in the Half, for the same reason as you. I set my Half PR so long ago, and even "technically" PRd at the half mark of my marathon. So, in theory, it's doable.

I too am working on time in 2011 and also my distance! Goal to run some 1/2's ... My times are getting better on my runs :O). Last summer was awful, I lost ground for a couple months, I couldn't figure it out. Finally I decided it was the heat and partly my thinking! Fall hit and I seemed to rebound! So far so good!

Core is a big one for me this year! Much effort will be put there!

Its going to be a great year I can feel it!!

You have great goals too, go girly!