The twins are finally napping and Pierce is wearing his Buzz Lightyear wings and watching Toy Story 3 as I walk out the door of our log home and stride across the wooden deck, on task to gather the eggs. It's been three days, because the air has been so brutally cold and frigid that I haven't been able to will myself out there. In any case, the eggs certainly aren't going to spoil when the highs every day barely top freezing.
I walk down the steps and catch sight of Miss Kirby in her daily dusting.
Each day she hops into this large pot, another failed planting attempt on my part, and dusts herself on the remains of potting soil and dead root systems.
She looks scruffy, a mixture of the cold weather and the dusted dirt feathers.
She doesn't like it when I come close, although she isn't particularly unfriendly. 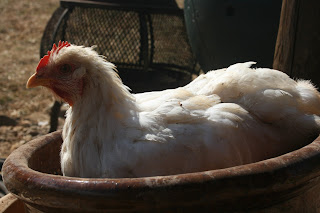 Giving me the eye, she hops out.
Dirt tumbles from her once white plummage. 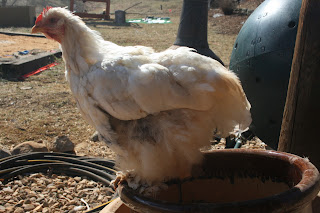 I continue through the yard, past the uncompleted playset and across the slightly soft rich red clay, the never-washes-out dirt Virginia is so famous for.  There is so much moisture in the soil from the melting and thawing of frosts and snows on the mountain that my Merrell clogs sink just slightly with each step.  The soil I tread upon was once the part of a homestead spread paid for by moonshining during the prohibition.  Old Timers have told us the stories of old Hans Clemons, sitting on the porch with a rifle across his knees and a mule tied to the tree beside him, hollering at anyone who dared to pass by on the dirt mountain road.  We tore down the decrepit, unlived Clemons house to build our cabin, but my mind can still see where it used to sit, that crumbling, cracked foundation a mixture of cement and whiskey bottles.
My destination, the triangular chicken coop, is called a chicken tractor, because you're supposed to move it around every day.  I keep reminding Paul to move the coop, but he says he's got to get the old 1969 Ford tractor hooked up to move it this time, because it's in a strange location.  Paul has been procrastinating, something he's good at, and as a result the coop is getting a little gross.  He hates when I constantly remind him of things that need to be done, which puts me in a hard place, because I don't know whether to mention it yet another time or to just keep my mouth shut.  At least with these cold temperatures everything inside is frozen solid. I sigh as I open the nesting boxes, and hope that Paul will get to it this weekend.
I reach my hand in the nest on the right, where there are two large brown eggs.  I tuck them in my Columbia fleece, thinking as I do so of Reid, who has been sick this morning.  His stomach was grumbling all morning; he'd grasp it and cry, and finally he had terrible diarrhea of the type that earned him a bath, with him sobbing the whole time.  I gave him extra snuggles, smelling his Johnson & Johnson scented head, and wondered how much of my spare time is devoted to worrying in some way about my beloved three boys.
I latch the box and open the one on the left.  Horace is nesting, but she doesn't mind when I greet her and gently push my hands beneath her feathered gray and white girth to pull out the clutch of eggs.  Three more large brown eggs.  Our white egg layers, the smaller chickens, haven't quite started laying again yet.  Once in a while we'll find a random white egg, but for the most part they stopped for the winter.
The wind blows right through my jacket and I walk quickly back inside.  I've been tending the wood stove all day, so I know that warmth awaits.  When I open the door, the comforting smell of chicken pot pie in the crockpot wafts my way, and I hear the beginnings of grumbles coming from Cort and Reid's room, just audible over the ending of Toy Story 3, which I can't watch because it makes me cry.  Naptime, it appears, is over.
This post is linked up with The Red Dress Club whose prompt is:
This week, we want you to imagine that after you have died and your daughter/son will be given the gift of seeing a single five-minute period of your life through your eyes, feeling and experiencing those moments as you did when they occurred. What five minutes would you have him/her see? Tell us about them in the finest detail.

To tell you the truth, I don't know what I'd have my dear boys see.  But here you have a 5 minute piece of my day and of me, as real as it gets.
This post is also linked up with WV Treasures Show and Tail, where people share their animal stories or pictures each week.  It is sure to warm the fuzzy-friend-loving heart, so go check her out.

This is so well written.

I was shivering as you walked through cold. A time of quiet is great thing to share with your boys.

Great job, what a neat life you have and your boys will have, growing up on a farm.
I'm not sure if it is just me but for some reason the title text appears over top of your first paragraph so I could not read the first few sentences completely... thought you would want to know!

beautiful writing. I could see it all and having been in a few chicken coops I know the smell as well.

Lisa - that was so beautifully written. I felt as though I was walking with you - experiencing every sensation you were :) Gloria

I really enjoyed reading your post! Great writing...what an interesting history your property has! Hope your baby is feeling better...2 of mine have had the stomach bug so far...keeping my fingers crossed that nobody else gets it! Hope those chickens didn't smell the chicken pot pie cooking!

I liked reading this post because through your writing I could feel and see what you saw and felt! It gave me an understanding of what your life is like on the farm!

A wonderful glimpse into your life! I especially enjoyed reading about the old Moon-Shiner and his rifle.

My neighbor uses a farm tractor with a finish mower to mow their lawn. His wife was always on him to cut the grass... One day while he was out of town, we taught her how to drive "his" tractor and she mowed the lawn (incidently, she drove it better than he does). Suddenly he doesn't procrastinate any more as he was mortified that she was using "his" tractor.

I think you may need to talk about learning to drive that old 1969 Ford Tractor... (If you don't already know how)

My guess is that as soon as you start to learn, Paul may be more motivated to get out there and move the coop around for you...

This was really well written. i loved it... Completely imagined myself there...

Lovely! Perfectly descriptive but not overdone!

That was gorgeous and real... and it makes me really want to go live on mountain.

I could feel the feathery weight as you nudged the hen aside for her eggs.

I miss having chickens, but mostly I miss the fresh eggs. Reading this brought me back to what used to be my daily routine of gathering eggs.

Enjoyed the glimse into your daily life. I could smell the pot pie too.

You have to love those girls (chickens) for all the hard work of making those eggs!

What uglydog said about you using the tractor could very well prove true LOL, when I started trying to use our big tractor is when I no longer had to do more than mention the task that needed doing. LOL.. The DH doesn't like me to use the big tractor. Whether its because as he says he is afraid I will some how get hurt or whehter its because that is sorta of a guy thing as one of my readers suggested I don't know but once I had DH show me how to start it, change all the gear things, and I used it a couple times. Its a thought lol.

i love your writing. it feels as though i am going to gather eggs with you. thanks for taking me along!

Must be really nice to have the fresh eggs. Sounds like an adventure!
I'm following from the blog hop.
I'd love a follow back at www.mikaspantry.blogspot.com
Thanks,
Mika

I love this-because it's a great story, plus, I have always wanted to have chickens but the closest I'll ever get to having some is reading about other people's chickens:)
I'll keep dreaming...

I enjoyed having chickens and fresh eggs - but that was eons ago! Nice story!

At its core this is a such a simple moment, going out to gather eggs, but it was so rich in detail and history that I just wanted to keep reading.

This is gorgeous, vivid description. And it makes me jealous that we can't have chickens here with our own eggs...this was a pleasure and a treat to read. Thrilled you linked up!

Beautifully written, Lisa. That introspective way you shared your moments with us. Incredibly real feelings. I shivered with you in your fleece just a bit, as you walked from one space to another. I loved this. Really loved it!

A lovely glimpse of your life. It has been interesting to read different posts about these five minutes and it's made me wonder what I would want to capture. Blogging really makes you both think and learn new things.--Inger

I love seeing chickens taking their dust baths! It's funny to see yours taking hers in your flower pot! lol Love the history about the moonshiners owning your property!

I was right there with you! Step by step. sandie

What a wonderful peek into your life. So well written and easily visualized. Thank you for sharing and I cried like a baby at the ending of Toy Story 3! Ann

Your descriptions are rich and clear. Truly remarkable!
I felt as though I was there with you, my heels sinking slightly, the chill penetrating my jacket.
Lovely job.

awesome descriptive writing! love that you joined in!

Sometimes the most mudane things make for the best memories. I love all the descriptions & I love that your boys can read this years from now & be transported to those days.

I love the angle you took with this. I have no clue what I'd choose to be 5 minutes of my day.

And as far as the chickens go, I love that they - or animals in general - have distinct personalities, just like people.

I'll be getting my first chickens this spring. This post made me want them even more.

I had no clue what I would have picked, either!

But, this was very descriptive!

I taught English for 9 years before Adrian was born. This is very well written. I could see and smell right with you.

Wow, girlfriend, you can write!!! I felt like I was walking right alongside you the entire time! Such a wonderful glimpse into a day in your life!

I liked getting a glimpse of a world I probably won't ever live in. Very nicely done.

I think giving them this glimpse of who you really were and how you lived is a beautiful thing. After all, those are the things we all want to remember when our loved ones are gone.

I adored this. How wonderfully described. How calming and meditative. The stories behind a home or a location fascinate me.