When Your Child Has Severe Acid Reflux, Part II.

You might want to go read my first post about this topic here.
As a fairly new mom, having to take my baby to a pediatric gastroenterologist for his acid reflux was intimidating.  I didn't exactly think of a gastroenterologist as being a warm fuzzy kind of doctor.  There are three pediatric gastroenterologists in our area, and they all share a practice.  Our first visit, we saw Dr. O.  He was very nice and examined Pierce.  He decided to switch the type of Prevacid we'd been using, because it wasn't working.  So he wrote us a prescription for a different format of Prevacid.  Dr. O also had us start giving Pierce 1/2 tsp. of Mylanta 2-3 times a day.  He took some bloodwork to make sure nothing else was going on.  Watching them draw blood from Pierce was awful, but the tech was very nice about it.  Dr. O. also had a nutritionist come meet with us, because Pierce was so small.  She talked about feeding very high fat foods, even going so far as to add in butter and such to meals.  We also started supplementing his bottles of expressed breast milk with a very high calorie preemie formula, which made me feel inadequate - as though my milk wasn't providing enough calories for him.  We left with a handful of flyers about nutrition and an appointment for a bariatric study.
The bariatric study was a week later.  Pierce wasn't allowed to have anything to eat that morning.  He was one grumpy baby by the time our appointment rolled around.  They wanted him to be hungry so that he would drink the barium.  Sure enough, he sucked down a bottle of barium in no time.  They watched as it moved through his digestive system.  They saw no signs of the reflux in the study, so results were inconclusive.  They did say it wasn't uncommon to not see reflux.  His bloodwork had also come back, and it was normal.
This was the appointment where I glanced at Pierce's chart and saw the words written failure to thrive.  Having worked for Children's Protective Services, I shuddered at the label.  It broke my heart.  Those three words meant he wasn't getting the nutrition he needed.  And although I knew that this was a result of all the vomiting, it still hurt that I couldn't find the fuel his body needed to grow.  Dr. O. was convinced the reflux was something he would grow out of.
A few months later, Pierce had another violent setback.  His sitter who watched him during the day had to use a steam cleaner he was vomiting so much.  So I called in for an emergency GI appointment.  Dr. O was booked so we took Dr. H., who had an appointment available.  Dr. H decided to take a new approach.  He took him off the Prevacid, and placed him on Axid.
Initially the Axid helped a little, but soon enough Pierce regressed again.  Dr. H. gave patients his email, so I emailed him a listing of symptoms.  He was kind enough to call in Reglan.  Pierce was on Reglan for two days before his hands got all shaky.  I was well aware that Reglan could cause neurological side effects in some children, so I stopped it.  We went in for another appointment and Dr. H. prescribed erythromyecin and cyproheptadine.  The first was to speed up the time it took for Pierce's stomach contents to digest and empty.  The second was to increase his appetite.  These two medications were both 3 times a day, and he was also still receiving the Axid twice a day.  It was unsettling to be giving him so much medication.  Particularly the erythromyecin, which is an antibiotic, and I worried about him developing antibiotic resistance as a result.  But we needed for him to stop throwing up all the time so that he could grow.
In spite of all the things going on, Pierce was a happy baby.  Here he is at just over a year old, playing with the steering wheel in the morning just before I ran the Outer Banks marathon: 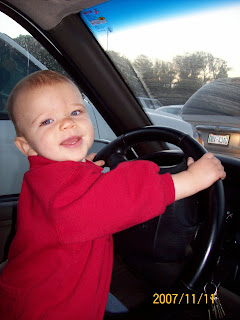 Here we are waiting for the race to start: 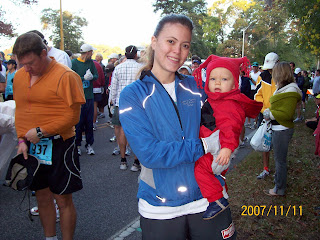 Fortunately, the medicine combination started to work.  Pierce was vomiting a lot less, and we were thankful.  He started eating more, and while still very small he was beginning to grow.
We made it through another year, and a few times tried to wean him off one of the meds.  Each time, he'd have a setback.  So we stayed the course.
The following year when Pierce was two, I was becoming frustrated.  So many meds for such a little guy!  And it seemed he should've outgrown his reflux by then.
On his second birthday, he had another setback.  He was violently vomiting for days.  We got him back on track, but then he had another setback in November for a few days.  And then again in December, this time for over a week.  He couldn't keep anything down and started to seem very weak and lethargic.  While I couldn't know for sure, it sometimes did seem like teething set off some of these severe regressions.
I called for another emergency GI appointment and this time Dr. C was the available doctor.  He ended up being my favorite of the three gastroenterologists because he was so personable, although all seemed quite competent and nice.  He sat with us for a while, really studying Pierce and considering the mixed symptoms I discussed.  He decided to do an upper and lower GI scope on Pierce.  So a couple of days later we headed to the hospital...
To read the end of the saga, click HERE

No wonder he's such a trooper! He and you and Paul have been through so much!...:)JP

He had so much going on for a little guy. I would have worried about all the meds too.

this is making me so sad... poor little guy... and poor you!

Poor little Pierce -- and as a new mommy, you must have been at your wit's end.

Your story is so sad. It's always tough when a child is sick. I hope he got better quickly. I will be checking back for the rest of the story. Blessings jane

Oh my gosh girl! I just can't imagine. Back when I had my daughter she was born with a hernia. She wasn't gaining weight like they wanted her to so the doctor made me supplement formula over my milk. I felt the same way you did about that. I did that for about a week until another doctor said not to do it.

Have a Wonderful Day!
Angela

I just cannot imagine the anxiety and stress you went thru with this. I would have been frantic. Thank goodness we know the outcome was a good one for this now thriving boy!

Oh, my goodness! That must've been so hard. He's a tough little guy.

I have this trouble myself for years. I know what you must be going through - can't imagine it being with a child. Do they know WHY? And I would never believe with all the other things you have going on in your life - that you were even having trouble like this. You should have things together there. My grandson - the 10 yeaer old has oral sensory issues and my new grandson 3 months old is already on previcid! Good luck and I'll say a prayer.

What a horribly difficult sort of health issue to deal with as a new parent. How do you not feel responsible? Oy!

You poor dear! The stress you were going through must have been awful! I am so sorry, and I hope things are much better now:)

Oh those times are so hard. When my youngest was newborn, he wasn't getting enough nutrition, and lost a lot of weight. It was a tough time!

My heart is just breaking for the little guy. Barium...YUCK! that stuff is nasty. I can't imagine the punch in the gut you must have felt when you saw "failure to thrive" on his chart.