Celebrating a Life, our Siamese Boukie

In May of 1997 I graduated college.  Paul had to take a last summer class to graduate, so we stayed in Waco and I worked at a vet for the summer while Paul worked through his last class.  We house sat for my traveling Geology professor, which saved us from having to pay rent.
While I was working at the vet one day a lady walked in with a tiny Siamese kitten.  I'd always adored Siamese cats, as my grandparents had one named Snuffy when I was growing up.  The lady said that she'd bought the Siamese, but that her grandson was allergic and she had to find a home for the kitten.  She wanted to know if we knew anyone who would take him.
Yes, I knew someone who would take him.  Me.  We already had two cats (and a hedgehog) but my heart was big (bigger, I'm sure, than my newlywed husband's).
So Boukie came home with me. 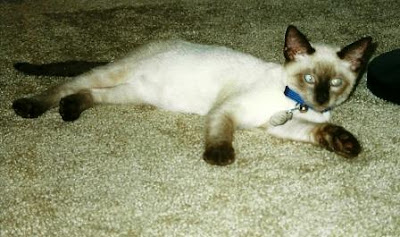 In the beginning, he was sick.  He had giardia, and needed treatment for that.  But once he got better he was rambunctuous and active.
We used to take him and our other two cats for walks on leashes.  They weren't allowed outside otherwise. 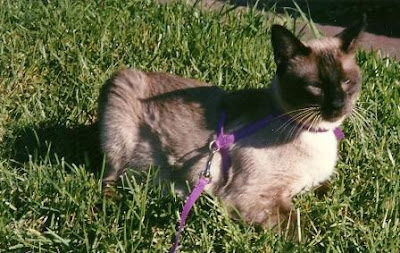 In his younger days, Boukie would try to nurse on your ears.
If you stood up and held out your arms, he'd make a funny sound, and jump from the floor into your waiting arms.
He loved a good snuggle, always.  If you were having a bad day, Boukie was there.
And he never knew a stranger.  Boukie was happy to give attention to anyone who walked through our door.  He was a cat with no reservations.
When we had kids, Boukie was so kind.  When the boys climbed on him and rough housed, he never minded.  He never growled or swatted.  He had more patience than any animal I've ever seen. 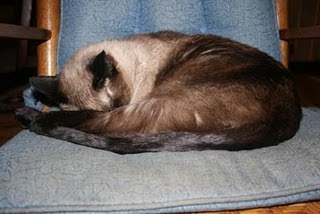 Some weeks ago, Boukie got penned behind the water heater.  I've no idea how he managed to get back there.  I almost couldn't get him out.  I ended up lifting him over the top.  I piled the 3 boys in the car and then rushed him to the vet, his eyes full of pus.  He stayed for a couple of days to get back on his feet, then returned home.
But he wasn't the same.  He stopped eating.  He paced, constantly.  He got weak and was wasting away.  We think he may have suffered a head injury when he was behind the water heater.  Even in the end, in his restlessness, he loved nothing more than a good purr on your lap.
This weekend we decided Boukie was suffering and it was time.
Rest in peace, sweet Boukie.  You gave us as much as a cat could give, and we are thankful for our fourteen years with you.  You were loved so much, and we will miss you.
I hope that you are frolicking in fields of catnip, reunited with your old feline friends Lionel and Toulouse.
This post is linked with Show and Tail at WV Treasures.

:-(
Love you Boukie. You know you will always be my favorite grandcat.

I know how you feel. I lost my dog Easter Sunday.

I am so sorry for your loss!!! What a beautiful cat!

I had a Siamese named Yoshi. Only had her for about 2 years as she developed kidney disease, but I loved her so much. They are such unusual cats.

Oh, Lisa! I am so sorry your family lost beautiful Boukie! He had a wonderful life with your family. Sending big hugs!

Lisa - So sorry to hear about Boukie. That brought tears to my eyes - it is so difficult to lose a member of the family. Gloria

It seems so unfair to me that our pets give us so much and are such great companions-yet they are around such a relatively short time.
I'm sorry for your loss-what a wonderful cat she was:)

Whew - I was worried the whole way through if this was a tribute to Boukie. I'm so sorry. He sounded just wonderful. It's really hard to lose a pet. (HUG)

poor Boukie, so sorry to hear about this Lisa. :'(

I'm so sorry, Lisa! What a great kitty he must have been. Rest in peace, sweet boy!

Sorry to hear about Boukie. You wrote a beautiful tribute to him. He was a good cat.

Oh Lisa, what a beautiful cat. I hope the boys are accepting the loss.

I am very sorry about Boukie. My family had a Siamese cat that lived to the ripe old age of 21. They are very special and affectionate. Boukie looks and sounds like he was a very special family member and our thoughts are with you.

I am so sorry for your loss. Pets are not really pets... they are members of the family. You really did write a beautiful tribute to him.

I'm so sorry--what a good cat. They're the toughest to lose.

I'm so sorry :(
I'm so happy he gave you so many great years though :)

I'm so sorry about Boukie Lisa! He sounded like he was a perfect kitty to have around the boys.

We lost our chihuahua when my daughter was 4. She had a difficult time with it. I pray that your boys are at peace with it and that the Lord will help you to answer their questions. I know how hard that is when you are grieving and the kids are too but don't know what to do.

I am so sorry! What an amazing cat! Your home was the right place for her to live her days.

You have so many snugglers at your house. Thank you for your wonderful comment on Shell's post.

I'm so sorry! There's nothing Worse than losing on of your four legged babies. Well losing your own child would be worse.
We lost our cat we had for 14 years just last year. I am so sorry for your lose. :( Big hugs to you!

I am so sorry. Losing a pet is like losing a family member. Rest in peace Bouki.

Oh my gosh. I am so, so sorry to read this. I can relate a bit, because I had to take my cat in yesterday to the vet for a horrible bleeding wound on her head. The vet thinks that she was bitten by another cat and it got infected--really gross abscess. Fortunately, there doesn't seem to be any head trauma and she should recover. However, she is getting old and I just don't know what we're going to do when "the time" comes.

My sympathies go out to you. It's hard to lose a pet you love. He looked like a lovely cat.

I'm sorry to hear about your kitty. I'm 65 and have had many cats in my life over the years, but I remember every single one. We've had some Siamese over the years too and they're pretty special. It's never easy to lose one.

Oh this made me cry! Maybe it's hormones, maybe it's remembering having to put our 13 year old very sick Sheltie down. What a sweet kitty!

Lisa, I am so sorry. We had to put our black cat, Susie to sleep a couple of weeks ago and I am still not over it. I always comfort myself knowing that we are giving them the gift of peace, just as they gave it to us for so many years. Boukie was beautiful, I have always wanted a siamese cat. Ann

I am so sorry for your loss...

So sorry to hear about Boukie! I know how hard it is to lose a pet. It's very hard. I think I have actually greived more for certain animals than for some humans in my life. I know he will live on in the joy of your special memories.Hugs.

So hard to loose a pet you've become so attached too. I'm sorry.

I am so sorry :O(, loosing our furry family members is sooooo hard.

It's always hard losing a pet. Especially one that's been around for so long. Part of the family.
Sorry you had to let him go.

I've never really been a huge cat person, kittens yes, but cats not really. BUT reading this & seeing pic totally reminded me of a Siemese I had when I was growing up. I LOOOVED that cat!!! What a sweet post, to such a beautiful kitty :)