A Wave and a Wink

It has been nine days since Red has taken a shower, and three days since she last went home.  She's been holed up in her tiny cubby-holed office deep in the lower levels of the William B. Tinker Science building.  The last time she spoke to another human was well over 48 hours ago, when a stray student mistakenly wandered into her office looking for Dr. Ranstaad, head of Physics.  They were in between sessions now and the halls were quiet, even on the rare occasion that Red did venture out to find a restroom.

It was just Red, her murky herpetology collection, and a dwindling supply of Powerbars and Diet Coke.  She had surrounded herself with spreadsheets and maps of the Great George River Basin, a calculator and a few tottering resource books.  Red was so close to a breakthrough. Numbers floated across her eyelids, over her brain waves, and through her senses as though she could see them in mottled rainbows of colors.  She could feel the numbers as they bumped their way across her synapses, trying to make connections that she knew must exist.  Every hour she was just a little closer.  It was there, she knew it was, if only she could just reach out and grab it in solid form. 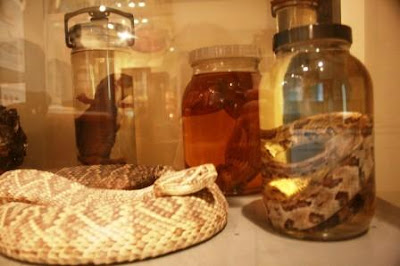 Red pulled at her greasy ponytail with frustration, attempting to tuck withered amber strands back into order.  She looked for the hundredth time over the local habitat of the Eastern Indigo Snake, endangered since 1978, supposedly due to destruction of habitat.  Red knew better.  She'd seen the regional dwindling of reptiles and amphibians much too heavily over the past eight years, and she was going to figure out why. 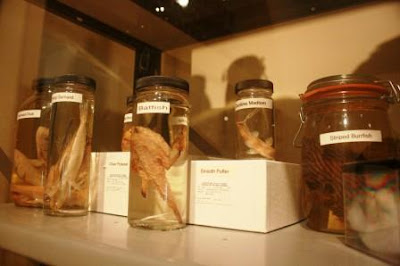 The connection had something to do with the grand Robicheaux estate.  It loomed on the edge of town in Southern luxury, attracting dreamy tourists during the summers from across the nation, and even overseas.  From her spreadsheets, Red knew that the concentrations of dead animals were heavier along the five mile perimeter of the estate.   She just needed to get some sleep, if the numbers would stop scrolling across her mind and let her rest, and then she'd grab McDonalds and head over there to see for herself.

She'd been sitting so long on the floor that her legs didn't want to unfold to allow her to stand.  Cramps surged across her muscles as she stretched out her feet.  She arched her back for a moment, and then raised her eyes to the jars on her shelves.  And that's when the octopus, the crown jewel of her herpetology collection, raised it's gelatinous tentacled arm at her in a wave, and slowly winked. 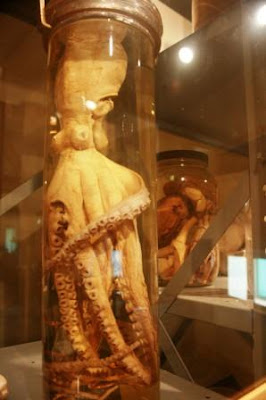 This is a piece of flash fiction for The Red Dress Club.  The prompt was to write the fiction in 300 words (just a teeny bit over, sorry!) or less, inspired by the word 'life'.  You can check out other writings HERE.  All of the pictures were taken when we went to the Natural Science Museum in Raleigh, NC last month.  I've been saving them for a little fiction ever since.

I so hope this will be continued. I am on the edge of my seat.

For a minute there Lisa I thought your vegetable preserving skills had taken a different track :-)

Love it! However, I must say I like lookin' at your canned veggies much better. :)

pretty darn creative. i'm always impressed when folks throw enough scientific or technical stuff into their writing to make me wonder if they did this work for a profession or perhaps majored in it in college, etc. or if they had to research it for authenticity... :)

Great writing! I wasn't sure where to go with this prompt and didn't do it. But you inspired me to come up with something.

You write very interesting stories. Nice pics to save from the museum:)

I just absolutely love this one Lisa!! That octopus!!

Is the snake info true? I was wondering where you got those pictures, and hoping they were not from your kitchen or den!

Brilliant use of your photos! This was so creepy, and entertaining all at once.

My favorite line is: "if the numbers would stop scrolling across her mind and let her rest" because it gave so much insight into Red, her brain and how she works.

Ok... so I know it all was supposed to work together but I'm squeamish and those photos about did me in...

I hope you are writing a novel.

I love the creepy photos. :-) It reminded me of science class when we dissected frogs. I still remember the smell.

That ending was so cool. Real or is she just exhausted?

I love how smart your characters and situations are. Your intelligence and obvious love of learning/collecting of details is evident in your writing.

One point...you say "Red" a lot. It took me out of the scene just a bit. Not always a big fan of pronouns, but since it's just her, I think you can do it.

Oh Lisa! This was AWESOMESAUCE! SO imaginative, love all the photos, too----where are they from?

You really took this and ran with it.

Your imagery & details are incredible---"Red pulled at her greasy ponytail with frustration, attempting to tuck withered amber strands back into order." LOVE.

Excellent, and now I totally want to know what's up with the octopus! Is she losing it (did she already?) or what?!?!?! More more more please!

I mean, it's great in and of itself. A mystery, a determined, quirky heroine, and then?

This is great. I particularly like how we don't know if she's hallucinating from exhaustion or if there is something weird going on with the octopus!