Today Paul and I celebrate 15 years of marriage.  I've already blogged about our wedding and our honeymoon so I figured I would toss up some pictures from the years before we were married - when we were just dating.  We met during Welcome Week at Baylor, so all of these pictures are from the college years.


This picture is from Fall, 1993, The Howdy Dance - we'd been dating all of a week or two in this picture.  I had to crop out Paul's freshman roommate and his date, because said roommate said about a year later that if he ever saw a pic of said date again he would never forgive me (and he didn't use such nice words at the time).  In fact, I think he may have suggested the ritualistic burning of the picture, but I refused.  So I'm guessing he probably doesn't want it up on the internet, even all these years later. 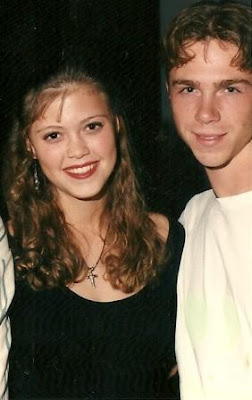 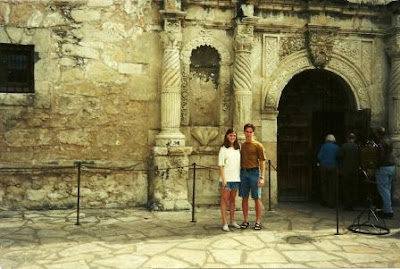 Another Baylor dance - 1994 - if you look really hard you can see the Alico building in the background. 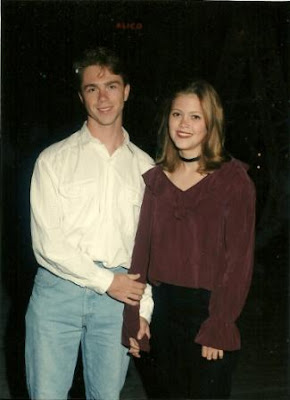 I went to Nebraska for Spring Break 1993 freshman year with Paul, to meet his family.  This is the house where he grew up. 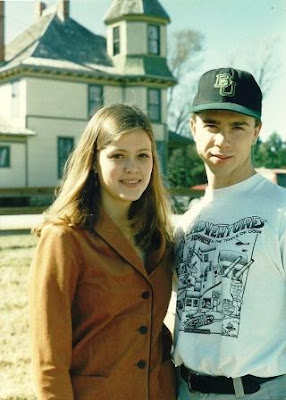 How cool is their barn in the background? 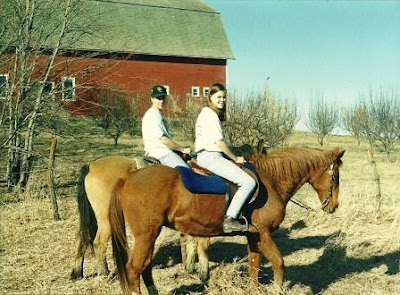 I have a great many pictures from football games.  Yes, I am wearing a beret.  I was all cool like that, LOL. 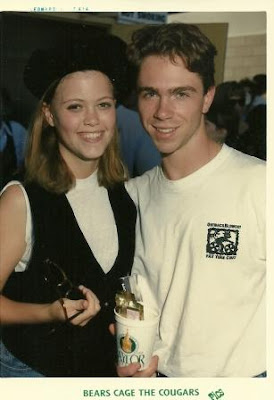 Fiesta on the River, spring of 1994.  I think this is my favorite picture of Paul and I.  Gosh we were so young! 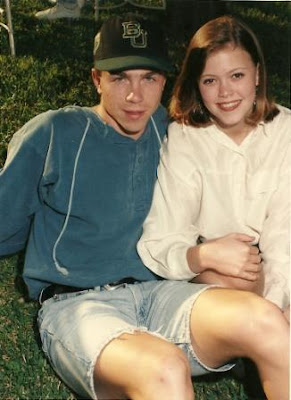 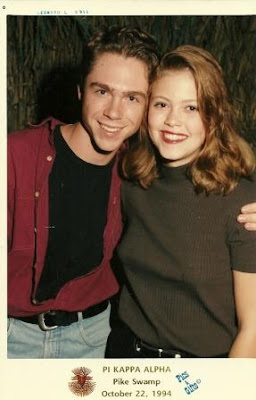 Fiesta on the River, spring 1995.  Fiesta on the River was just a fun little campus event with games and socializing on the river.  You could buy virgin (Southern Baptist college folks) margaritas and all sorts of yummy Mexican food. 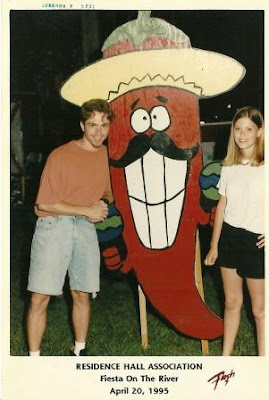 A year and a few months after this picture, we'd be hitched.  We're not so young anymore, and not so romantic.  But I think William Wordsworth sums up a marriage of longevity nicely with Ode: Intimations of Immortality, from Recollections of Early Childhood (even if he wasn't necessarily referring to marriage):

Though nothing can bring back the hour
of splendor in the grass, of glory in the flower;
We will grieve not; rather find
strength in what remains behind.

Email ThisBlogThis!Share to TwitterShare to FacebookShare to Pinterest
Labels: paul

I loved seeing pictures of your dating years. Isn't it amazing how quickly time passes!

I love that while the rest of us in the world we're struggling with bad hair, yours was so very 2011! You look amazing. In all my pics from the 90s, I'm sporting a white woman's afro. You're beautiful! This was a great post and a great idea (I'm still not gonna do it though due to the technical hair difficulties.)

Congratulations and happy birthday to the twins too! Those are great pics.

Aww, Happy Anniversary!! Great pictures...it's so fun to look back isn't it?
P.S. My dad lives in Nebraska...he's a HUGE Cornhuskers fan.

wonderful! you were the cutest couple on campus, of that i have no doubt! happy anniversary to you both, and many, many more!

You guys are so cute!

Happy Anniversary! You two are such a cute couple. It's fun looking back on pictures before married life. :)

I hope you have a great day!

So young! So cute!
Happy Anniversary!

How sweet! You two look so meant for each other.

What a great journey of your courtship years. Happy Anniversary! May you have many more wonderful years together!

Happy anniversary to you both - I loved seeing your pictures. You both were so cute and young and you still are!

What a great post!! Very Happy Anniversary to you two. Great pictures!

Happy Anniversary!!! It's amazing how quickly time flies when you're having fun!!! :)

You guys look so incredibly young!!! Like babies!! Happy Anniversary!

I want to wear a beret!

Congrats to you both!
Your photos are precious-you do look so....young.
I wish you many, many more years of happiness together.

Happy Anniversary! And.. you're still young, are you kidding? ....

Hey, you're already talking like you are both geezers! NOT!! You still have so many more wonderful, youthful days ahead of you, and that is what I wish for you! You two are beyond cute!! Paul is just dreamy, and I bet you were a cheerleader, or at least prom queen! HAPPY ANNIVERSARY!!! I hope you have fun plans??

You too look so young. Well, you were young.

I hope you have a wonderful anniversary!

Lovely photos. Congrats to both you. :)

You two were the cutest couple on campus!

Hope you had a Happy Anniversary and may you have many, many more!

Happy Anniversary!!! ADORABLE! you were looking a little Reese Witherspoon sometimes... we did college at exactly the same time. :) In some ways it feels forever ago, and in others- only yesterday, doesn't it?

I loved your pictures! You both are so cute together. I think I need a beret. Happy anniversary!!!

Love these. Now off to copy & paste the recipe below this post that just caught my eye.

When I look at photos of us way back I think whew we were babies LOL.

I read your wedding post :O), you looked lovely! Your dress was really pretty. We did the Justice of the Peace, just me and honeyman. Two witnesses from the JPS office (we did not know) lol and the JP. We got married in our jeans and boots.

We didn't want the stress or expense of a wedding either. :O).

You two are adorable in all of these pictures. I love that quote. It's true. Happy Anniversary my friend!

Congratulations, I wish you many, many more happy years.

What super cute photos - thanks for sharing them :)

Happy anniversary! May it be a year full of many blessings!

Congratulations! My husband and I have been together for six years now and it is always surprising to me how much time has passed. We are greatly looking forward to each anniversary!

I appreciated seeing all the pictures of you two as you were dating - they remind me of the pictures we have. Now I'm going to have to go flip through some nostalgic photos. Thank you!

Congrats on 15 years!! We will be celebrating our first year in a month :)

Beautiful couple. So sweet and cute.

Happy Anniversary! It was fun walking down memory lane with you!

Happy anniversary!!! I am a little late...Great photos!

Congrats! I was just scanning some of our wedding pics today. It's amazing how we survived. You look like us...mere babies!

Happy Anniversary (a day late sorry). You guys were babies, I love it! Have you ever been told how much you look like Julia Styles when you were younger? Awe you guys are just adorable. What a great milestone 15 years is, Congratulations may you have many many many more ♥

Happy Anniversary! Wishing you many more happy years together. It's great to meet young. You will forever cherish those memories.

Well congratulations! We'll be hitting 20 in April.
Jeez, were we ever really THAT young? LOL!

It's kind of fun to look back - but WOW, where did the time go - right?

Happy belated anniversary! I love all the pics you shared!

Don't know how I missed this when it was posted last year, but it showed up as a post I might like with your pic. You look SO adorable!! I love the flashbacks!! :)