Two weeks ago I went out for a trial 11 mile run to see if I could pull off running a half marathon in November.  It went okay, so I mulled over my two choices and decided to register for the Danville Half marathon, which was this past weekend.  Unfortunately, on Friday, I came down with a stomach bug.  I woke up Saturday morning 3 pounds dehydrated and feeling pretty weak, but I'd already paid for the race so I decided to just give it a shot.  If nothing else, it'd be a pretty day for a run.

Since I hadn't done a lot of long runs prior to the race, I decided to try racing in the Zensah compression socks that my parents got me for my birthday last summer.  I wasn't sure if this was the best idea, since the furthest I'd run in them was 6 miles, but with the odds already against me due to that stomach flu, what did I have to lose?

Here I am at the start of the race with the boys, who were distracted by the geese.  The first 5 miles or so ran along this river, with gorgeous waterfalls at one point.  It was the most perfect day to be out running - temps in the low 60s and sunny with just a mild breeze. 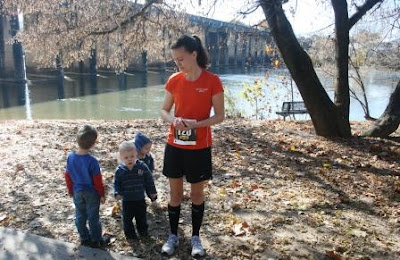 I forgot to do my asthma inhaler before the race, which bothered me a bit in the early miles but then I adjusted.  At mile 4, a guy running past that was doing the 8K told me I was 11th female, and I decided to try to hold that spot through to the end.  At around mile 6, I started feeling the effects of the dehydration, and was really getting thirsty.  At this point I took some water, as I ran through a check point pavilion.  The race then went off into the woods, onto a gravel path, and began to hit some hills.  Miles 6-9 were hilly, with the largest and longest hill being right at around mile 8.  Normally I wouldn't take Gu until mile 10, but since I was coming into the race calorie-deficient, I took my first Gu at mile 7.  And then at mile 8 my stomach went GRRRRRRRRR.  And my mind went Uh oh.  And then I'M SO THIRSTY.

At mile 10, I took some Immodium, which I also wouldn't normally do in a race but had brought along just in case, because of the stomach flu.  This seemed to help enough that I was able to take my second Gu.  But nothing could quench the cry for thirst.  They had plenty of aid stations along the course, but it just wasn't enough to ease my desire for fluids.  I switched to Gatorade but still I was so thirsty.  The last few miles I could feel myself losing pace a bit as I struggled.  Still, I enjoyed the crunch of the leaves under my feet and the sun shining through the trees.

At mile 11, I felt a blister on the ball of my right foot.  Luckily, it wasn't so bad it affected my running much.  Would it have happened without the compression socks?  Hard to tell.  But my calves felt good running, even when my quads and hamstrings were getting tired, so I think that in the end running in the compression socks was a good decision.   That said, I'd probably need to run in them more often for longer distances if I was going to attempt something like a marathon in them.

Finally, I saw the bridge in the distance that marked the last bit of my route to get to the finish line.  Here, Pierce demonstrates running across the bridge.  Only he has more energy than I did by the time I crossed it! 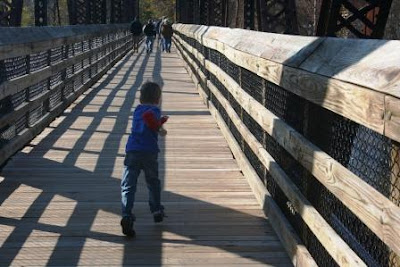 As I pulled into the finish line, I waved to the boys, who were cheering for me from behind an iron fence: 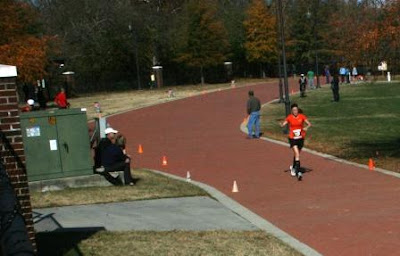 I crossed the finish line in 1:56:26.  Because I don't run halfs very often, it turns out that this is a PR for me.  I can't help but wonder how I might've run had I not been so dehydrated.

Know what makes you feel better when you are super thirsty and have just run 13.1 miles?  This: 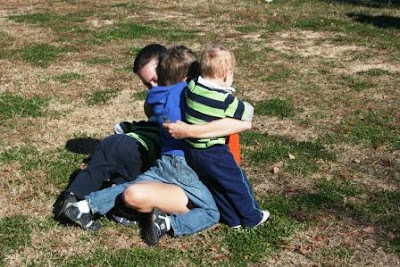 In the end, thanks to this being a smaller race, I placed 1st in my age group, and won a very nice beer mug, which Paul promptly declared to be his. 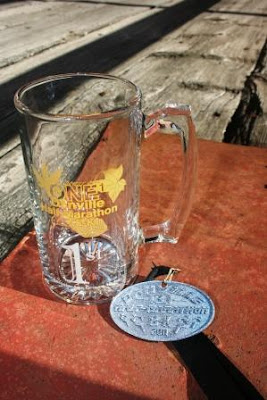 Bottom line?  I loved this race.  I can't wait to do it again.  This was my second time running it, and they have changed the course and the month, but it's a great race either way and I love the size and the support and the beautiful views along the way.

That was an excellent time! Congrats on winning your age group. Also, there were quite a few women in your age group so that wasn't an easy win.

Congratulations! I so admire you. You are one tough cookie when need be. I hope you're feeling better.

Congratulations on your win! You are one tough cookie to run right after the stomach flu!

Congrats! I loved getting to see group hug! I am so impressed that you made it through the race!

Wow, congratulations! That's great! I hope you're feeling much better :)

you are so awesome!!!!! that time rocks! congratulations on an amazing race!

i'm walking a 1/2 the sunday after thanksgiving so that i can run one in feb. hoping my knees hold up.

When I was reading this story I was thinking 'you are one tough cookie'...I see others had the same thought! How do you accomplish all that you do? Super Woman:) Amazing!

Wow! I admire your perseverance and determination! And congrats on placing first in your age group!

I hope you're feeling better now!

wow, lisa, you are awesome! i wouldn't have even considered running w/ flu and dehydration! crazy woman!

Way to go Lisa! I love the group hug photo-what a wonderful reward at the end of your race, and that mug! It's great, and big enough to fill with lots of liquid!
Once again, I'm impressed by what you can do!

Wow! Congratulations! I am super impressed!!

Your toughness is admirable Lisa. Glad also you have such a strong supporting cast.

Whooooo HOooooooo.... You Rock!! I think it is great that you keep on going even when the going gets rough.

Congratulations, Lisa! It sounds like you did an awesome job with that race. You must really be proud.

Wow, Lisa, this is so completely exciting!!! Congratulations on such a huge accomplishment!!! You have such a beautiful family--and you must make them so proud.
XO
Cindy

Lisa
You are just one amazing determined lady! What a great example you are to your boy. One who perseverses!
Congrats on your win, you more than deserved it.
Blessings-Kimberly

Gee whiz, woman! THat's incredible! To run that well without really training AND feeling sick. You poor thing--way to push through it! Way to ROCK the RUN!

You go girl!!! wooowhooo first in your age group! With all you had going on that truly is amazing! Great job!!!!

You are soooooo fit Lisa, I'm just blown away. If I ever win the lottery I'll pay you a handsome wage to be my persoanl trainer if you're interested.

Oh gosh, you are a brave person to run with stomach flu, and WIN!!! Amazing! You are Superwoman!!! Congratulations!!! Actually, this run story had me on the edge of my seat, fearful that you were really going to get sick along the way. Kind of like a suspense novel! The picture of you with the boys at the end is just priceless, it is BEAUTIFUL!

I am truly impressed!

Sounds like a great course to run! And wow, doing this after being sick- I'm impressed!

Wow! I wish I had the endurance to race.

YAYAYAYAYA! Congrats on a race well-run! And to do it feeling lousy..you're amazing! Nice time:)

You are amazing. That's all I can say!

Wow, color me impressed!! There's no way I could even manage a race like that in a healthy state, never mind being sick with a tummy bug!!

Love the pic of the boys hugging you at the end of the race! That's the greatest prize of all!

Wow! Thanks so much for taking us along. I loved your description and was right with you (well almost). You go girl! I am proud of you and I bet your boys are too.

Congratulations - I agree with Ginny - I was just wondering when you were going to drop down sick! You are made from different stuff then I am - good for you! sandie

Congratulations Lisa! You sure do have a lot of determination to not let something like the stomach flu keep you down!

Congrats! Amazing and you look great!

You are AMAZING! I haven't even tried running a 5K yet and you're out there, with a stomach bug, running 1/2 marathons. I need to get my lazy butt into gear and start running more. I've gotten so lazy with it lately.

I LOVE LOVE LOVE the pic of you and the boys. So sweet.

Congrats on winning your age group. What a proud moment!

I am so proud of you, Lisa. You are such an inspiration.
Hugs,
Betsy

Great job!! You are one tough cookie to run after the stomach flu...ugh. Sounds like the perfect day for a run :)

Aww I love the picture of you and your boys hugging. What a great reward after running 11 miles! Congrats on the half marathon...good for you! One of my goals is to run a marathon or two next year. I've never been a runner so I've been training for the past few months. My goal right now is 3 miles. I don't think I could ever get to 11 miles like you. Kudos!

I seriously can't believe you raced after just getting over the stomach flu. I haven't been really sick for about five days now and I'm still taking it easy. You're amazing!

Hi Lisa, great job on the 1/2 mary PR! I HEART my compression socks & my husbad loves his too. I'm a CEP girl & he's a SWIFTWICK guy. LOL!

As for the training I paid for...I'm hoping it will make me stay structured. I don't need anyone to really push me. I just need someone to keep me accountable & to keep me from getting injured. I'm the QUEEN of injuries. :-(