On Saturday I woke up at 5:30 am to drive an hour in a rainforest-worthy deluge to Martinsville to run their half marathon.  The rain didn't let up during the wait for the race, and standing/shivering in the pouring rain while waiting for the race to begin was unpleasant.  When the race started 10 minutes late, that was even more unpleasant.  But once I got started I was much happier.  I do actually enjoy running the rain.

The race wraps through some town streets and then spits out onto a greenway at the 2 mile mark.  One thing I loved about this course is that there were plenty of water stops and they also had portapotties along the course.  I didn't need one this race, but it's always nice to know it's there.

I've had some trouble from my right glute for a while now, and I took a couple of ibuprofin before the race as a preventative.  It's good I did, because it was acting up fairly early on in the race, around mile marker 4.  I eased up a bit on my pace since I still had a long way to run at that point.  The pouring rain served to keep me cool, though, and obsessing over whether or not my drenched lavender running shorts were see-through took my mind off my discomfort.  Since no one pointed at me and laugh, I'm going to assume they provided adequate coverage.

The long grade from mile 9-11 slowed me up quite a bit.  A few folks passed me.  My glute, which was hanging in there, at least wasn't any worse.  At mile 10 I ate a Gu, hoping for a little extra energy.  Around mile 11 you come off the greenway, and into the town streets.  There were rolling hills along the last couple of miles.  And finally, soaking wet but happy, I saw the finish line. 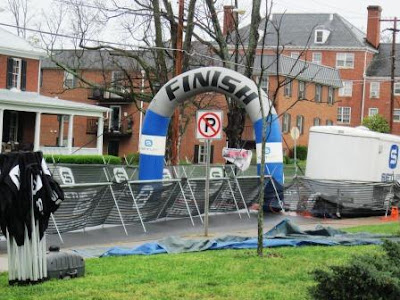 I ended up running 1:53:48 and I'm happy with that right now.  Do I want to run faster?  Of course!  But I feel like I raced fine for where I am right now.  Martinsville gave out very nice technical t-shirts, tote bags, medals and hand towels.  That's some great swag! 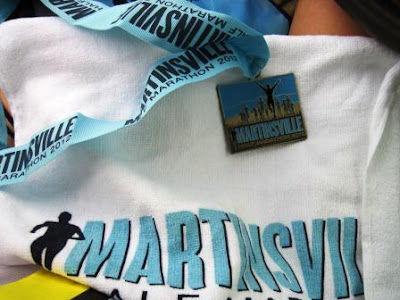 I was very happy to get into some dry clothes, and thankful I'd had the foresight to bring a change with me.  I stayed for the awards ceremony, as I placed second in my age group.  I won a fun wooden train whistle.  The boys were impressed when I got home and showed it to them. 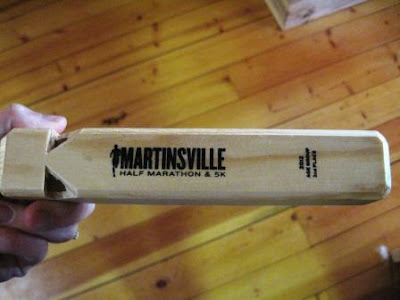 I think I'm going to start getting some more frequent ART treatments the next month or two to try to get this glute issue rehabed.  It's been bothering me since January, and although it only acts up when I'm running 'fast', I don't want it to become a larger problem.  My next race will likely be a 5K in April.

Congratulations, Lisa on your accomplishment!

Way to go, Lisa! Congratulations. I do hope you get your glute issue resolved!

congrats, and I agree, running in the rain can be quite enjoyable

Congrats, Lisa! I'm glad the boys liked the train whistle. Livie has one that she really likes.

And I'm glad you enjoy running in the rain. While I don't necessarily find it unpleasant, I'd just rather not run in the rain; maybe it's from the days when my squadron had physical training every morning, and on rainy days we had to run in the rain. (Running while it's snowing, on the other hand . . . I don't mind that at all. Go figure.)

Congrats! I bet the boys love the train whistle!

CONGRATS!!! WHAT AN ACCOMPLISHMENT!

Congrats! Whew, glad I skipped that one as I have to have conditions just perfect.

I'm so happy for you!! Congratulations Lisa!!:)

WTG!!! I am with you I love running in the rain! But not so much being cold lol.

You had a great run! Congrats on your placement!

I agree get the extra ART work on your glute :O). That is a good idea!

I am still working on the disc issue in my lower back. I have been on two runs, 3 miles each in the last two weeks. The one last week went pretty good and I didn't have any shooting pain while running or after! I am trying to do what I am told by the Dr. but its so hard as I want to run!

Well done! In the rain, no less. You deserve to feel very proud!

laughed at your see-thru worries. :) at least it kept your mind occupied.

Congrats, that is so amazing!! I can see why your boys would be thrilled with the train whistle. I hope you get the glute problem taken care of.

Congrats Lisa. I do not mind running in the rain either. It makes me concentrate more I think.

Great stuff Lisa. I love to read of your running as I used to run at every chance could but no longer am able as I have health issues which is one huge frustration. I can now enjoy your running with you. Wow a whistle and a great swag bag!

Congratulations on your place!!

that's an awesome time! great job! i just wanna be able to run again. wogging is killing me!

This is making a little more sense to me now because my DD is training for a half in May, and I think she and her hubs are doing a warrior race next month!

Way to go Lisa!! :-) some day I hope to run a half marathon, maybe the Disney one. You inspire me!

Lisa
You are such a trooper running in the rain. And second place is great
I looked up 'glute' in my pocket dictionary and couldn't find it.
Whatever it is, I hope you are healed before your next race.
Blessings-Kimberly

Wow! Congratulations on your achievement! I give you a lot of credit. I can't handle anything more vigorous than walking...

Congratulations!!!! You are such a trooper, and a good athlete. Did many not run because of the rain?

WOW... great job. You did fabulous considering your glute was acting up. Love the t-shirt.

So many challenges other than just running. Whenever I think of runners I think of you. Congratulations on another race : )

That rain drains your energy some anyway. Congrats at finding that finish!

Way to go! I am just finished my first week of the C25K program. I can't imagine running a 1/2 marathon! Great job!

Congratulations! And kudos to you for running in all that rain. We had downpours, too, about an hour northeast of Martinsville.

That's a great time, Lisa! I love running in the rain too :)

The Preppy Girl in Pink said...

I'm impressed by true runners. I run because my daughter runs and it is a good way for us to spend time together but I really do not enjoy it. I'd much rather run around playing a game. My head doesn't know what to do when I am running so I usually think about way to much stuff and take the enjoyment out of it. If I'm running with Ash, we talk to each other and it helps.
Congrats to you!!

Yes, by all means, get your muscle tended to...I found out that I herniated a disc (now back in place) and tore my hip flexor (probably from moving, yard work, etc)...:)JP