Paul submitted a film of Pierce learning how to ride his bike to the Bike Shorts Film Festival, so recently we all headed downtown for the event.  First we grabbed dinner at the City Marketplace.  I had the most wonderful food - I think it was called Incan Paradise - 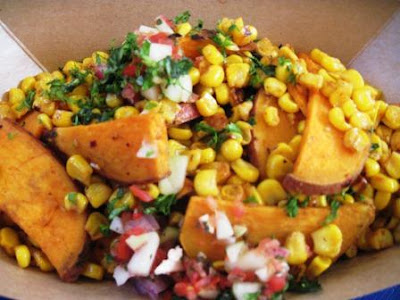 I'm going to try to recreate it at home.  It came from this place called Firefly Fare, which is all local cuisine.  So yummy! 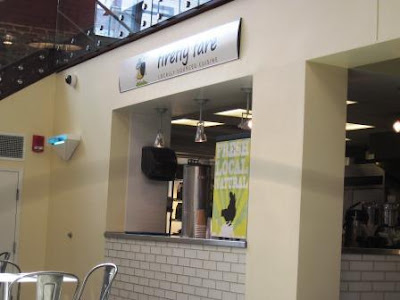 This was the first time I'd been in the City Marketplace since the big remodel.  It looks very nice.  Course I miss the old Cuban place - I loved their food so much.  Happy to still be able to see those grand tall ceilings: 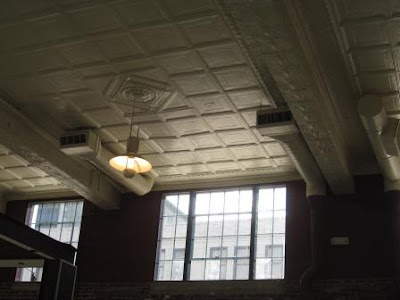 And I thought this mural on the floor of the entry was a nice touch: 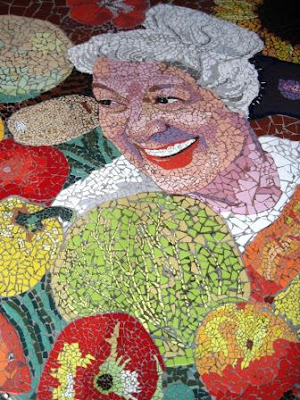 After dinner, we had some time to kill, so we decided to go for a trolley ride. The boys were thrilled - we hadn't ridden the trolley since last summer. 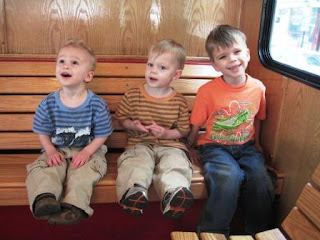 Possibly the cutest picture of Pierce with his Dad ever! 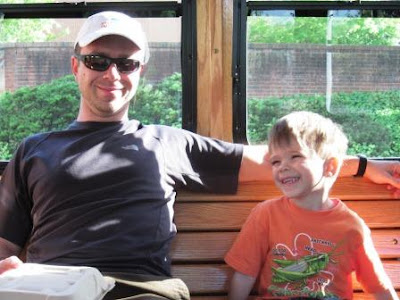 After the trolley loop, it was time for the reception, which was held at the Taubman Museum of Art. 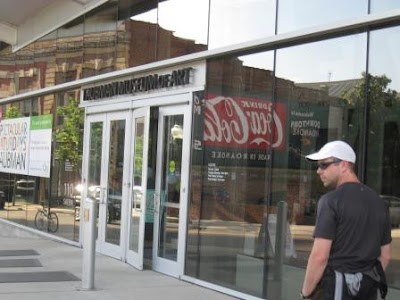 We just barely managed to entertain the 3 boys until the films started.  Thank goodness they were all 'shorts' - otherwise we'd never have survived! 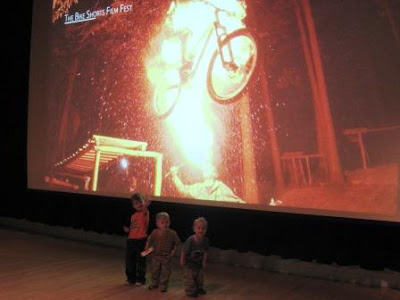 Paul's film seemed very well received - lots of laughter from the audience.  While it didn't win, it was fun to see Pierce on the big screen.  This isn't the full film, but you can check out the trailer for it here:

Hi Lisa, That is the cutest video ever! Love the photos from the trolley ride and your "salad" looks delicious. Looking forward to you sharing your version of that. Hope you guys have a great weekend.

The food looks really good and the trailer was wonderful. Made me want to see the whole film.

Great pics! How did you get to keep them three that still dor a pic:) great video! Have a great weekend.

That is the best!!

This post contains it all, a yummy looking plate of food, great photos of a trolley ride,(is this what I know as a tram?) lastly a nearly won short film. Does Pierce Brosnan need to worry yet about the new Pierce on the block? Love it all. X

I thought the trailer was great. Very "Gladiator" like!

I LOVE the film! I sure wish I could see the whole thing. Fantastic job.

Paul's trailer is so cool-very professional!! I added it to my favorites on youtube!

Posts like this make me wish I was one of your kids ;) You guys have so much fun together!

The video is on Youtube now in a two part series (8 minutes total). I'll be replacing them later today with better versions. Part II has no sound due to licensing issues so I'll be reposting it with a different song than was used in the film festival. You can find all my videos under username MrPworkman. Thanks for the kind complements on it!

i am so laughing at that film! too cute!!!

That's so cool!!! You keep doing stuff on our to-do list for this area... Devil's Marble Yard, Polyface, the Star Trolley!!! :) It's great! Congrats on the film, even if it didn't win!

The film is so wonderful. I am so impressed. Sorry it didn't win but it looks like you had a nice time at the event.

This is really cool! Your son is a star! Have a great weekend!

I love your film clip. It is cute, funny, and has suspense...all in about a minute! Wow, a surprise to see Taubman, I have been there several times. Where is this Marketplace and would I like to go there? We are going to Lynchburg today to try and find the Rhino Farm, ABC Cemetery, Church Of Spock and other weird sites.

film making is such a bold and fun adventure!
and wow... what an artsy/cool place. you seriously must live in the BEST area!

This sounds like a wonderful outing! The food looks great! I love the film!

That tiled mural is amazing.....

Now this looked like fun. I loved the picture of Pierce and his dad. How cute! sandie

I love the film!! So "dramatic" and so touching. I liked the credits that showed "Starring: Pierce."

That Incan Paradise looks delicious. I'll be anxious to see what you do with it.

Yummmm.... Incan paradise looks so good. When you get it figured out... Maybe you would want to share the recipe.

How cool! I loved the pictures!

That salad looks amazing. Wow. I bet it was fun to see the film on the big screen. How ecxiting!

Love the trailer...how cool and creative! Ya know, I have to agree with the cute factor on the picture with Pierce and his Dad.

What a fun idea this was. Great shots and I hope you share us your recreated recipe : )