By the time our day at Colonial Williamsburg was halfway over, the boys had hit only one (the Colonial Garden) of the required five places on their Kids Spring Adventure Map to get their free Keepsake Pin.  Probably because selfish mommy I kept wanting to hit places like Governor's Palaces and cemetaries.  So it was time for us to get down to business!  As we walked about, we saw these little wells everywhere.  So cute. 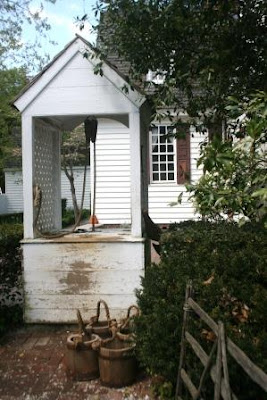 The Courthouse - we didn't go in because there was a long line by this time.﻿ 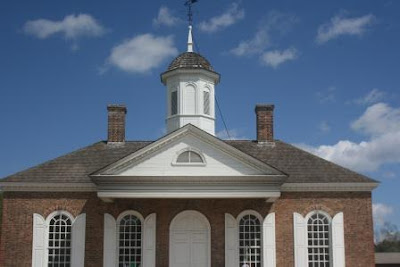 This funny little building was called The Magazine.﻿ 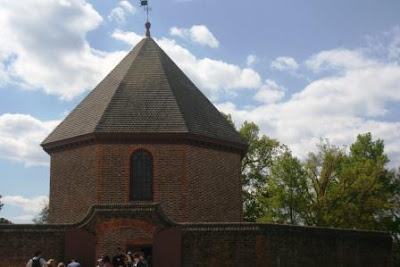 Pierce compared it to a lighthouse, and I could certainly see some similarities.﻿ 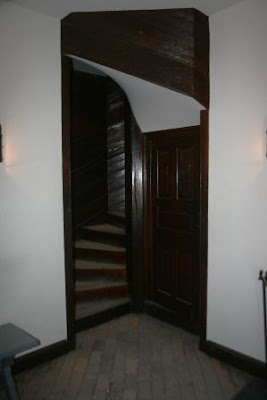 Upstairs, we found more guns and spears and swords.  Turns out, this was where the Governor kept all his implements to be ready for war.﻿ 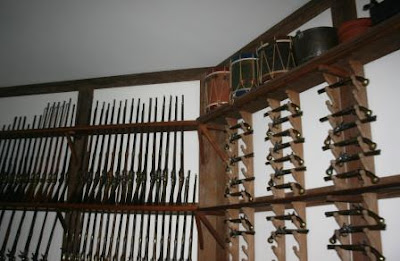 After touring The Magazine, we were starving!  We walked past the long line at Chownings Tavern, and headed straight to a long line at Raleigh Tavern and Bakery. 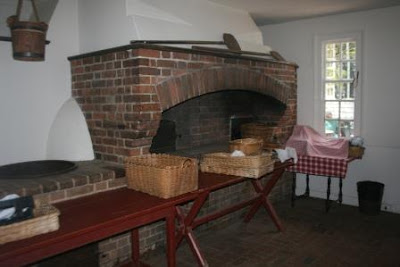 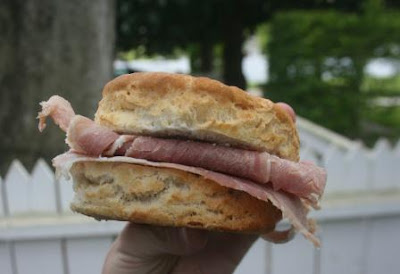 Once our bellies were full, we headed off to the Public Gaol (jail).  This was Pierce's favorite place he visited in Colonial Williamsburg. 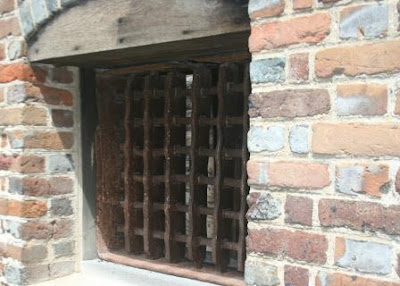 He and the twins went a little crazy in the dark and gloomy jail cells, running back and forth.  That wooden box looking thing in the left hand corner?  That's the 'toilet' - there was a hole in the middle that ran down to a sewer system of sorts. 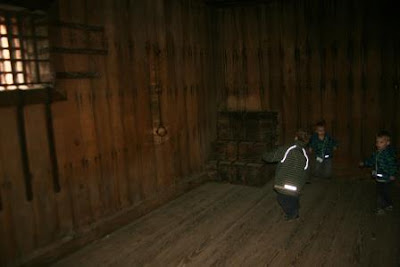 I told the boys if they didn't behave they might find themselves locked behind this door.... 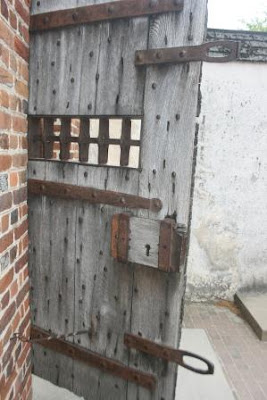 A picture of the jail, from the outside...the caretaker actually lived here as well. 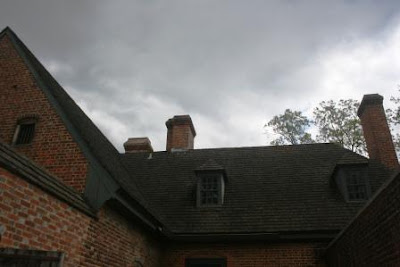 Next we walked by the Capitol Building and on to the Powell House, where the map showed there were kid friendly activities.  Indeed, the boys loved these wooden hoops with sticks. 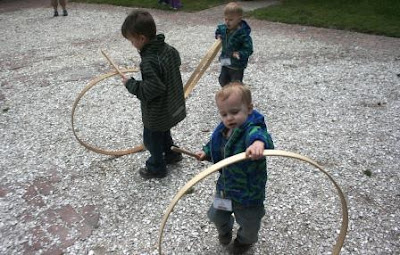 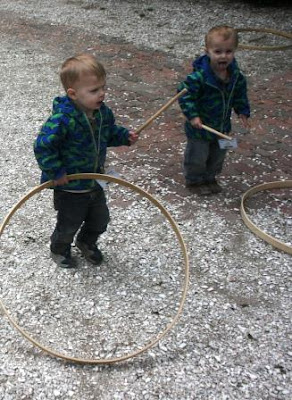 They also learned how to make sachets in the Powell House, and drew pictures of encouragement to be sent to George Washington's army.  We stopped in to the learn the trade of the Cabinetmaker on the way out, and received the highly coveted Keepsake Pins, which the boys loved (Cort and Pierce picked drum pins, and Reid picked a duck).  On the trail to our car, I saw this interesting little building and wondered if it might have been a place where messenger pigeons were kept and trained at one point.  I looked for a plaque, but alas, didn't see anything. 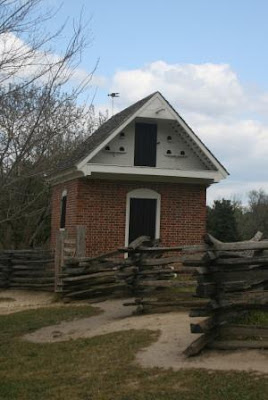 Pretty sure he's saying, "Ya'll come back now, ya hear?" 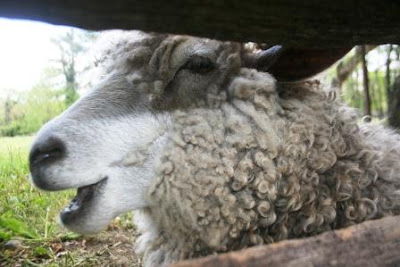 This is such a fantastic place! I feel so lucky you shared this tour with us. Sure looks like the boys had a great time!

I love that Williamsburg is so lovingly maintained! It's wonderful that the kids got to play with the hoops.

You guys sure did a lot of sight seeing while you were there. I am tired just looking at the pictures.

Hubs would like to see all the guns, spears and swords.

This is so educational but fun too...The fireplace caught my eye, I like it!

Wonderful trip to take with your kids!.. reminds me of Sturbridge Village in Mass.

Looks like the perfect place to take little boys!

oh, those big-as-your-head ham biscuits look delish!!! yum! i KNEW i should have just bought the ham at the grocery store yesterday... sigh...

What a fun afternoon! My girls would have just laughed at me if I said that I would lock then behind that big door, shhhh I sometimes wish I could though LOL

What a great adventure!! Fantastic pictures and looks like you guys had lots of fun. That ham biscuit looks fabulous and huge!

I would have loved to walk around with you and the kidlets! Historical venues are my favorite! :)

This post makes me want to go back East again-at the very least for one of those ham biscuits!

When we flew to Maui in March, the flight attendant gave Amy a pair of wings...Poor Amy. I think she was mortified, but took the wings and said thank you. Just a few years ago she would have been thrilled!

Cort's little face is so cute! I can relate to his frustration-I'd have yelling for my mom too;)

Loved the tour! And my surprise in this post is that the scary dark old jail was the boys favorite!

thank you, lisa, for this lovely pictorial tour!
what an amazing place! it does look like your boys had a great time!

have a blessed day!

What a fun trip! I now have this in my mind as a place I'd love to visit!

Thank you for the tour...the kids seems to enjoy it there too. I visited Williamsburg in 2006, loved it :)
Have a lovely day!

Love how there are lots of hands on activities for the kids. I'd like to try that hoop and stick game!

Carrie at In the Hammock Blog said...

this looks so fun and the biscuits-yum!

Looks like everyone had a good time! The ham biscuits look so yummy!

Hi! Saw your link on someone's sidebar with the CW title in it and clicked over. This was a fun memory. We lived in CW for 10 years, and the kids (now young adults--mid-20s) consider it where they did the majority of their growing up. We're now out in the Valley, so it was so very neat seeing some familiar scenes on your blog. Thanks!

That ham biscuit looks wonderful. I had to laugh at how many guns you encountered on this trip.

You make me want to go and visit even more than I already do! Looks like the boys had fun with the hoops and jail!

Your field trips always look like so much fun! What memories for you and the boys!
love
tweedles

Hi Lisa, I love hearing about your W'burg trip... There's just so much there for ALL ages... Glad you found some 'kid-friendly' things for the boys... You'll have to take them back there when they are older....

Those biscuits do look GREAT....

That looks like such a great vacation, and now I'm totally wanting some biscuits!

Wonderful tour! You packed a lot into a day.

I like those hoops. In fact, today, I went to Avoca, which is an historic landmark (historic mansion, former plantation of Col. Charles Lynch, Revolutionary War) in Altavista. I was there to take photos for the paper of school kids doing different "hands-on" activities. One of them was learning to roll those hoops. It's apparently harder than it first appears!

My boys would have loved it and I'm sure I would have used a similar threat! Holy biscuit!

The photographs of the kids with their hoops are darling!

Such fun times! I would loved to go to Colonial Williamsburg :)