As part of the Children's Claritin Mom Crew, I had the opportunity to host a Madagascar Movie Viewing Party in preparation for the release of Madagascar 3.  Claritin sent me the dvds for Madagascar 1 and 2, some Madagascar 3 stickers, Claritin samples, and popcorn boxes.  Pierce was very excited about this, as he had never had a 'party' before (it wasn't so much a party as just inviting a couple of friends over, but don't tell him that!).  I decided to hold it on a Friday night, let the kids come in pjs, and have it be a pretend sleepover - they were still heading home for the night!

Claritin provided me with some recipe ideas, and I made their turkey wraps which were a big hit with the adults.  I also had a nacho bar and discovered in the Jello aisle Madagascar jiggler molds for $1.  Would you believe I'd never made Jello Jigglers before?! 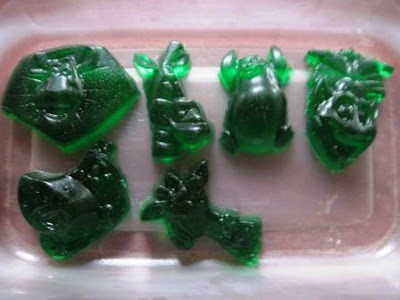 Packets of Madagascar 3 stickers and Claritin samples for the taking: 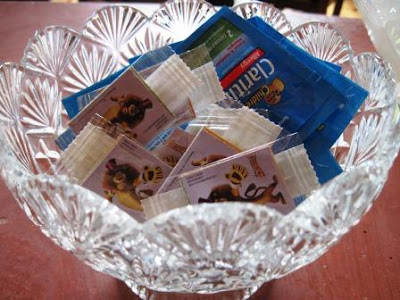 Popcorn ready for the making.  I used coconut oil and real butter and salt to make it taste like movie popcorn and the kids loved it so much I had to make a second batch after the first! 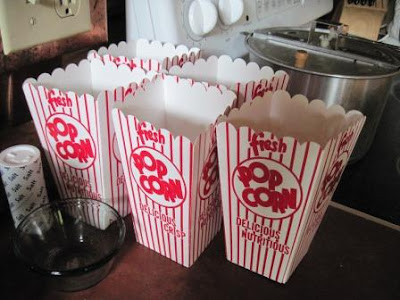 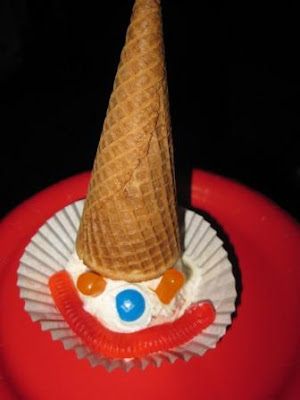 The boys had a fun time decorating the clown faces, and sampling the candy: 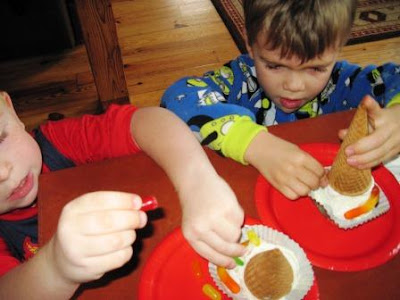 I could go for this creation!  ﻿ 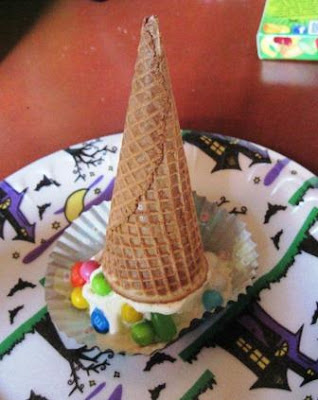 I put sleeping bags, blankets, and pillows all over the floor and took a vote - Madagascar 2 won.  There is one child missing from this picture, but it was hard to get the kids all together!  Turns out it was a beautiful evening and they had a lot of fun just playing on the porch. 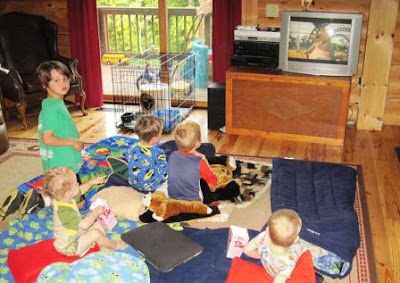 Seems like everyone had a fun time, and Pierce is already begging to have another 'sleepover' movie party soon!

Disclaimer: I was provided 2 dvds, party suggestions, samples, stickers and popcorn boxes for participating in the Claritin Mom Crew program.

great fun! just realized it's been ages since I had popcorn..

What fun! I love the ice cream cone creations!

Now I am hungry for popcorn and that ice cream cone creation looks delicious!

What a great party! It looks like everyone had fun!

how fun! The kids look like they had a great time!!! We love those movies.

That looks like a fun party ! I love thoae popcorn containers ! Have a great day

Oh how fun Lisa...great job and truth be told, I've never made jello jigglers either! :)

What a fun night! I love cartoon movies :)

the penguins are my favorite part. :)

I'm assuming my invitation was lost in the mail?

The clown face cones are sooo fun! Bet the kids giggled a lot making them.

Looks like Pierce's first party was a hit! Those cones are sooooooo cute--I bet they were fun to make.

You are such a great mom--you really go the extra mile to create special times for your kids. They will not forget them.

what a great idea and it looks so fun!!

those ice creams cones are adorable!!

Looks like a wonderful sleep-over, movie, treats, etc.... I'm sure the boys loved it!!!!
Hugs,
Betsy

Now I'm in the mood for popcorn and a movie...glad your party was a success!

Looks like you all had a great time!
Sandy

I bet they had a great time!

Looks like great fun!!! I have to make those clown cones, too cool! I have to take four allergy meds a day! And they still barely keep it at bay.

What a fun movie party! You always give me good ideas for my kiddos Lisa. Thanks!

I bet they had a great time. Those clown head ice cream cones are really cute.

Cool! I can't wait to see the last movie!

Nice sending them home at the end of the event! Fun party.
Greetings from Cottage Country!

Looks like a fun time for the kids! Love those jigglers!

Looks like a fun time! You do a lot of fun stuff with your boys! They will never forget it! This is bringing back memories for me. My son loved hosting parties! I always had birthday parties for him and we always loved having everyone over for Halloween. This summer he's turning sixteen, so things are changing fast! Have a fun week!

Lisa, The Dog Whisperer, Cesar...he is in a show every day at 8 pm and i usually see what advises he has...

I say this because I saw your comment - Sandie's blog!
BShell xx

That looks like so much fun!! I love the idea of a "pretend" sleep over! Too cute.

That's a party in my books too and what a fun one at that!!

Next time you have a sleepover, can I come? :)

That sounds like fun! My kids would love to see that!

What a neat idea. Especially PJ's and mostly the going home part...lol

Love the sleepover~but not really...what a novel idea to keep your sanity! Those cones look yummy but the popcorn aroma has made it's way to CT!...:)JP

Thanks for sharing this information on the Madagascar event. I am planning to arrange a children’s candy buffet event and searched online for an exquisite LA venue. Came across some good venues and planning to book the right one soon.