Remember last week when I took Monday off from blogging?  Well the boys and I met my aunt and uncle, Pam and George, in Greensboro and then headed to Asheboro to spend the day at the North Carolina Zoo. 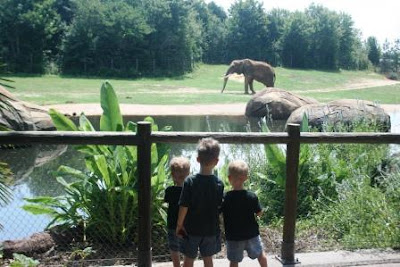 The NC Zoo is immense.  It was a very hot day (around 92* or hotter) and we certainly felt it as we walked around.  I kept refilling the boys' sippies though and they seemed to handle the heat pretty well. 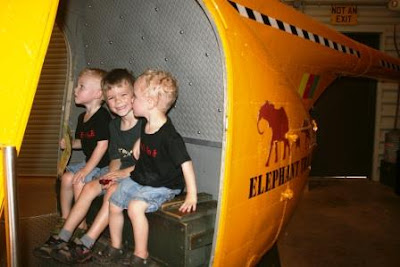 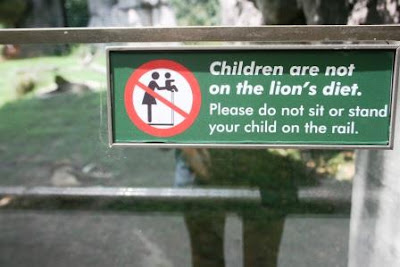 Have I ever mentioned how much I adore lilly pads?  Possibly my favorite as far as flowers go. 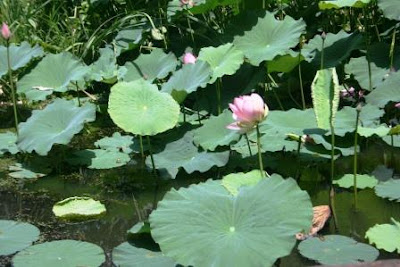 Pam and Reid check out some ostriches, zebra, and a giraffe that was peeking out from a rock formation. 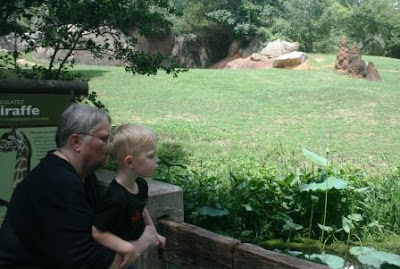 Pam and George treated us to a dinosaur 4-D movie.  I wondered what 4-D was, and it turns out that it blows air at your legs, the seat vibrates, and you get poked in the back.  Pierce and Reid did pretty well, but Cort got a little scared.  After the movie, Cort threw a huge tantrum (as only an almost-3-year-old can do) over having to return his 3-D glasses. 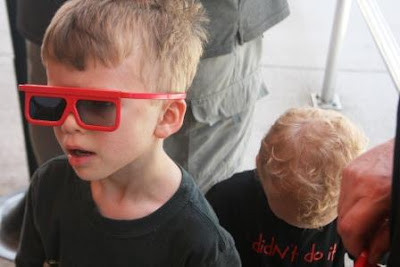 George, Pierce, and Cort check out the inside of a bee hive.  Reid refused to go in initially, because he thought the huge bees on top were real. 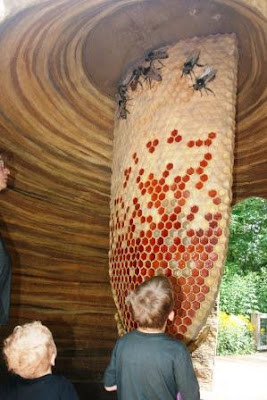 My favorite section may have been the desert.  I just love the southwest so much.  I hope I get to venture back sometime, but for now I got my fill in the zoo! 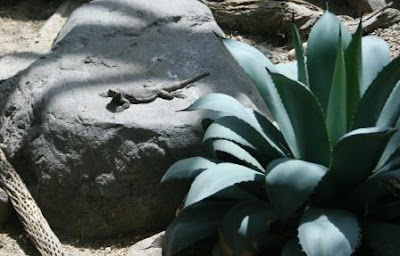 Cort said that this ocelot was "his" cat. 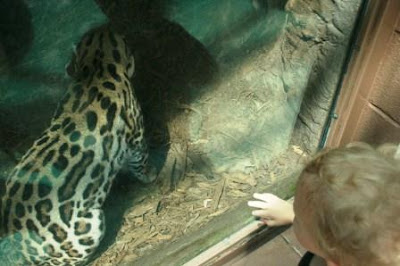 And in the nocturnal section of the desert, we found this huge frog.  The glass was a little smeared, so the picture isn't as clear as it should be. 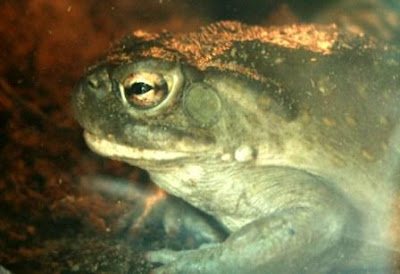 After that, we saw a very large grizzly bear.  We also saw the black bears.  We recently had a black bear run across the highway in front of our car, which really made an impression on the kids.  So they were happy to check them out from a distance. 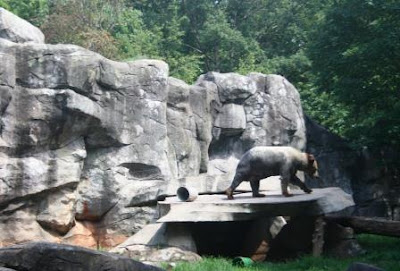 The zoo geyser, in the prairie section. 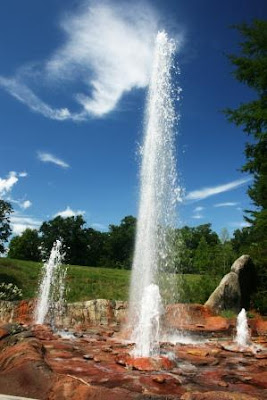 In addition to the desert, I also really like swamps.  We had fun checking out all of the gators. 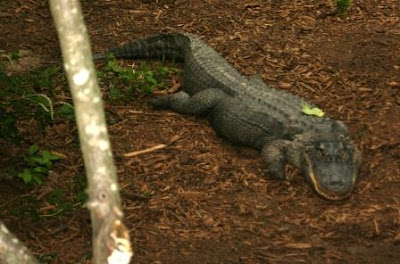 Reid looks at the huge American alligator on the shore across the water.  Not so scary from a distance. 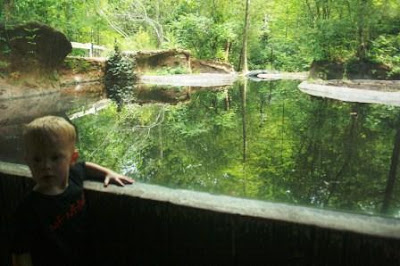 Overall, such an excellent day, and one that the boys will be talking about for months to come.  Extra thanks to my aunt and uncle for this special day!

Readers, what is your favorite animal at the zoo?

What great photos from the zoo. I can see the wonder in the boys' eyes! My 3 yr old great niece visited the zoo last week for the first time and is still talking about it. I mailed her a Curious George goes to the Zoo dvd that she's enjoying!

Hope you all have a good day.

I definitely think elephants would be my favorite. They always seem so calm!

Were heading there next monthago before school starts! Glad you and your boys had a great time!!

This zoo is huge! My guy would have loved to have been the bears.

I think it is very mean that poor little Cort couldn't keep his glasses :-)

What a great day! Looks like a really good zoo.

Polar bears are my favorite animals. That is a really nice zoo, you're right. I like it there!

Ah, so that's where you went off to. Looks like a great zoo; much nicer than ours here.

Wonderful photo's. And, Cort? I woulda cried too if I had to give back the glasses. :)

Neat! Used to love going to the Phoenix zoo with our grandsons. It's a pretty awesome zoo too, but only during the winter months. :-)

I always like the butterfly exhibits and aquariums.Primates are also fun.

The zoo trip was always fun when the kids were little. Looks like your boys were enjoying themselves, despite the heat.

I've been to that zoo, and it's great. I love the big cats (of course). I love seeing photos of your kids seeing things that fascinate them.

looks like a lot for them to take in and wonder at. nice!

What a great zoo, and what a great visit, too! Amy and I were both laughing hard at Cort's desire to see a cow:)

My favorite animal would have to be one of the big cats. There was a tiger at the Rochester zoo that was SO huge! I loved to watch him, but I was also very glad for the high fence between us;)

Great zoo pictures.They will make wonderful memories. My favorite zoo animal would be a garaffe.

Were going next month hopefully! Glad you and your boys enjoyed it ao much! If i replied twice sorry couldnt remember if i did or not. Have a good day

Nice zoo...nice family trip there. I loved the zoo trips with family. Dad had a relax with the kids time. It made fun family time memories.

There's nothing better than a trip to the zoo with the kids! We get to go to the MN zoo over Labor Day and Hailey is already talking about it.

I personally do not like 4-D movies. I went to one in Florida and it just gave me the creeps. :)

Great shots, and what a cool zoo! our local zoo isn't so awesome... though they try and have improved- it still leaves a lot to be desired....

Very cool! If you ever decide you want to go again let me know and we'll meet you there! :)

We happen to hold a special spot in our hearts for the Polar Bears because we got engaged by them at the Central Park Zoo.

Sounds like an awesome and educational day! Enjoyed the tour. :)

Go Cort! I love cows...lol. I don't think I would like the 4D experience. Looks like a great day was had by all though.

How fun! I really don't think I would feel comfortable with those giant bees either!

I remember taking the kidling to the zoo...she would always head right for the dolphins (only she called them dollyfins). I love seeing all the wonderful things you do with your boys, and the memories they bring up.

Oh --what a fabulous day!!!! That brought back so many memories of taking my sons to the zoo many years ago --and then my grandchildren... SO much fun!!!!!!

I love it all... Not sure I have a favorite--although I love seeing the bears and lions and of course, the giraffes...

Great set of pictures.. Looks like the boys enjoyed it alot.
Hugs,
Betsy

That looks like such a great place for all the kidlets to visit. I would be careful about the bees too! sandie

Looks like you all had a fun day at the zoo. I love going to zoos.

What an amazing place!!! Love it - and that bee hive - I can see where a kid might be a little scared of that! Wow!

So glad the boys had a good time at the zoo -- I remember taking my boys at this age and it was always fun. :)

It looks like a fun trip. Great photos too.
Kelly at Little Wonders' Days

Besides the extreme heat I would say that was an awesome day. I haven't been to a zoo in years.
I love the giraffes.

I always loved doing the zoo when my kids were small...

My kids aways loved visiting the zoo. They have fond memories of trips there.

We are lucky to have the only free zoo in the country in St. Louis so that made frequent trips *with a picnic lunch) very doable back then when money was tight.

I'm so glad you had fun!
That bee hive is cool!

We love the zoo!
It has been way to hot lately to go though...