Going for a Ride with Pierce

Last week I dreamed of riding.  In the dream, I felt so carefree and happy.  The next day, I awoke determined to ride by the end of the day.  Paul was happy to watch the boys for me in the evening while I rode Phoenix.  Afterwards, I tacked up Pierce's pony and decided to see how she handled being ponied behind Phoenix.  Previously, I've always just led her on the ground.  She seemed to do just fine, so I yelled up to the house for Pierce to go get his helmet and come join me. 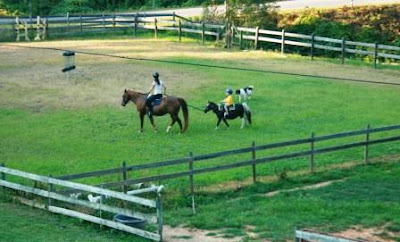 Pierce is finally at the point that he balances well enough that he can ride along behind me without me worrying so much about him randomly toppling off. 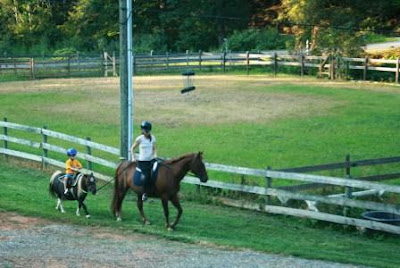 In fact, he really seemed to enjoy himself.  Of course, his current fascination is Little House on the Prairie, Season One, so we have been talking about horses a lot recently.  Not to mention our trip to Chincoteague! 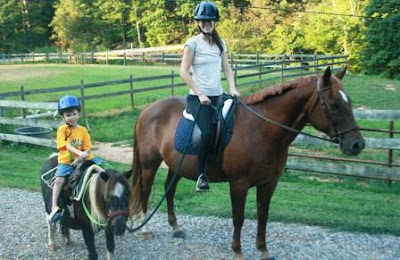 After several trips around the arena to see how he did, we then headed down the driveway, along the old road, and then cut over into the large pasture. 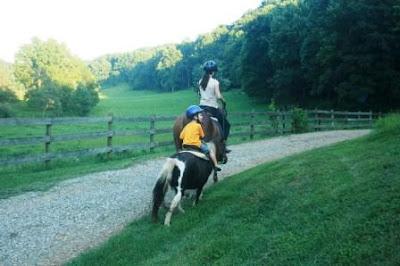 After that, Cort and Reid, who had been watching from the porch, begging for a ride.  They're so tiny, they don't stay on very well, so I kind of have to lead the pony AND hold on to them! 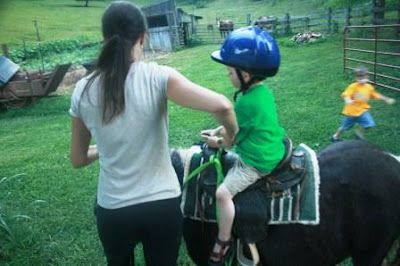 Luckily, Harriet is a pretty lazy pony, so she doesn't object to much of anything.  As you might notice from her immense belly, her biggest concern just seems to be where her next meal is coming from. 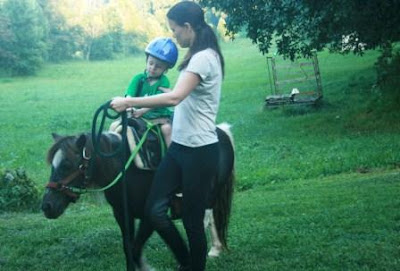 After the boys all had a little walk around, I decided to put a bridle on Harriet to see what she'd do.  When I tried her out (when I was 4 months pregnant with the twins) the lady I bought her from said that she didn't do well in a bridle.  It did make her a little grumpy, although she wasn't really bad in it.  I think I may start looking around for a used hackamore for her.  Pierce will soon be at the point he doesn't need to be on a leadline anymore. 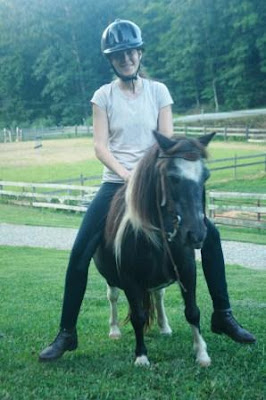 My feet just almost touch the ground....and now, reader, I guess you've had your laugh for the day!

A smile for the day definitely! What wonderful memories you're making for your sons and everyone looks so happy. =)

Looks like a great day! Hope you have a great weekend

This is the best kind of family time!

What a wonderful evening! Pierce looks wonderful on a horse.

I've always wanted to ride a horse. I don't know why I haven't. I'm from a small town surrounded by farms and knew tons of horse people. Even now as an adult, my best friend is a horse person. But I have never been on a horse. I need to remedy that.

My Daughter always wanted a horse as a child. We didn't live on a farm and I had no way of keeping a horse so ... she never got her horse. Now that she is older, she doesn't want the work that goes along with it.

I wanted a horse so badly when I was growing up, but I didn't get one. I pretended my bike was a horse. :-(

Aww, man! I've had dreams like that and I wake up really missing riding!

Looks like you guys had a great evening! Your boys are so cute on Harriet. (I think they have the same adjustable purple helmet that Livie has.)

Bwahahaha, I love the photo of you atop her, by the way!

Would you consider adopting me? The childhood you are giving your sweet boys is exactly the childhood I dreamed of. I was so horse crazy as a kid I couldn't see straight!

What a fun day! And it does look like Harriet's tummy is almost touching the ground too;)

What a wonderful experience! Pierce looks great riding on the pony!

Love the bottom photo I am still laughing.
I am so happy you are riding again. You are a great Mom and now you can share your love of riding with Pierce and then the twins will follow close behind someday. B

If that just isn't the sweet thing, mom and Pierce together. I love it!!

You live in such a beautiful place to raise boys. :)

Your boys are blessed to have this exposure to horses and farm life. They are just too cute!

Nice to see both you and Pierce riding.

I was going to say something like 'Oh, poor little horse...' until I realised I would have gone for the smaller horse, as I'm affraid of heights too.

Your kids have a great Mom.

Fat and calm make good trial ponies for little boys- I hope they all pick up your love of riding!

How cool is that! I didn't realize you had horses that you ride.

I try to ride weekly, one of my favorite pasttimes for Sunday.

So sweet! Pierce has a pony? That's awesome. You all look like you're enjoying yourselves. What fun. :)

What fun! I loved these photos so very much. Precious memories in the making!

Hope you guys have a nice weekend.

Well - yes I did let out a giggle. I bet the boys really did love the pony rides : ) Seems like the horses did very well.

oh man. i love these pictures! you're livin' the life! also. if i were to sit on that pony? i bet it'd fit me perfectly.

That looks like so much fun, Lisa. Pierce looks like he's a natural at it--like his Mom....

Indeed! (Not a full blown laugh, but a huge smile!) Harriet is cute & it's great that the boys are able to ride.

WOW! How fun to see your little guy catching on so quickly! He is very lucky to have horses at his disposal--something all of us city gals envy. :)

I LOVE Little House too!! (I still hate that mean ol' Nelly Olsen though!)

yay fro you guys! gosh my kids would be so jealous. We live in tidy suburbia, no horses just a yell away from any body's house. My oldest has asked recently for lessons but I can't fit the mega ride out to the nearest barn into my already full after school driving schedule. (yes, I need to fix that soon. just smelling the barn makes me happy)

Great memories in these photos.
So glad you all got to ride.

What fun! I grew up with horses, but I haven't ridden much since I was a teenager. Thanks for sharing.
Cheers,
Shanae
My Blog

I need to get on a horse and ride, its been a long while for me. Richard

I love your photos! I have not been riding in ages. He looks great on the pony.

The first time I went horseback riding was during a senior class trip the day before graduation. We had all be swimming and then had lunch expecting to go back into the river. Instead someone showed up with a load of horses and took all of us in our swimsuits riding. Besides getting some of the worst sunburns in history each of us were chaffed in delicate spots and extremely sore.

We were all a funny lot at graduation. We could hardly walk and our gowns were rubbing on raw skin.

That was fifty years ago. I have never been riding since.

that little round pony, Harriet, had me at first glance and you know it!...:)JP

That looks like so much fun! That's great that one of your sons can ride behind you. It's only a matter of time before the other 2 can as well.