Although I had run walked all through the Antietam Battlefield during my marathon, I wanted to return to share the experience with my boys and walk through the visitor's center.  This is the Burnside Bridge: 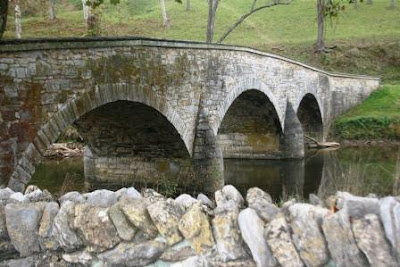 See the rock wall?  The Confederate soldiers crouched behind it, perching their rifles over the edge as they fought to maintain control over this bridge. 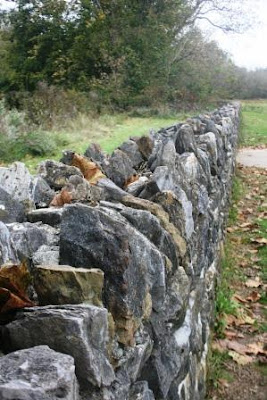 So many died (500 casualties) behind the wall that they pulled planks off the bridge to use as grave markers, and buried them in the ground until they could be moved later. 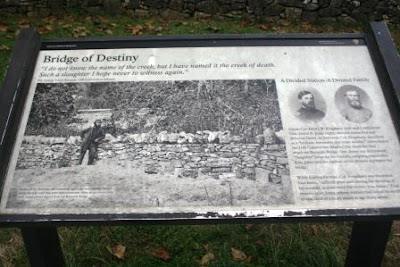 When we were in the visitor's center, we saw a painting of the battle here at the bridge.  This tree, a sycamore, was called the witness tree.  Back then, it was just a young wisp of a tree.  Today, it is massive.  I'm sure it enjoys it's more peaceful days in the present, rather than reflecting on the past.  I couldn't help but wonder if there are any bullets still lodged deep in its bark. 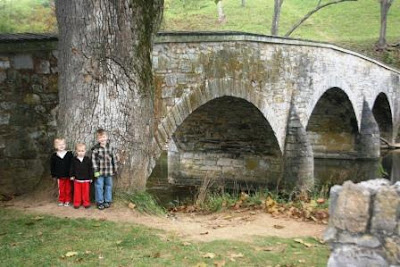 Statues of soldiers tower over the battlefield as you drive (or run) through. 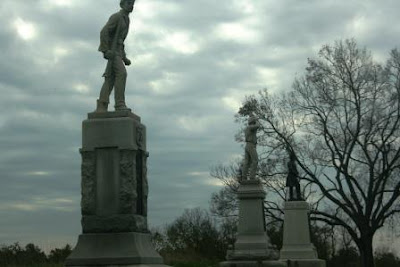 This is the Dunkard Church, which was a reference point for soldiers during the Civil War.  At the day's end, it was used temporarily as a medical aid station. 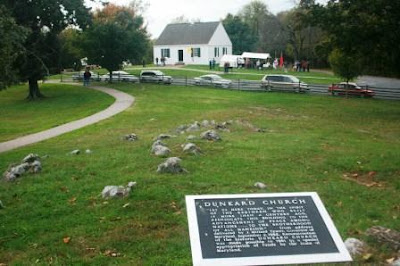 On this day, we found reenactors set up around the church. 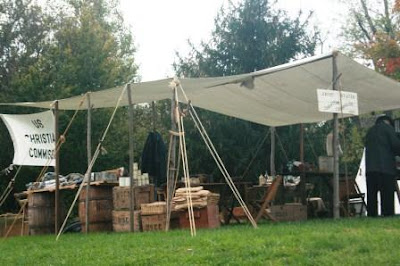 Inside, I was intrigued by various medical tools and bottles. 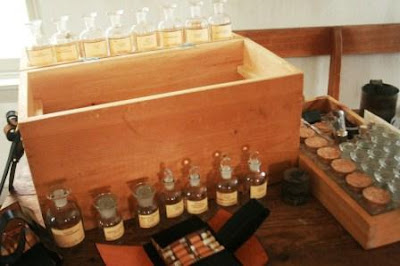 I confess that I totally have a thing for apothecary jars. 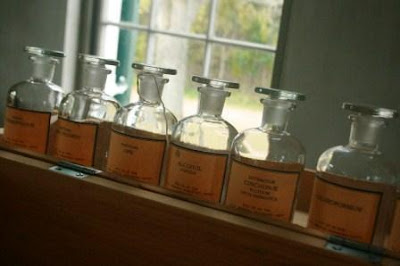 The boys learn from a soldier about how medicines were made during Civil War times. 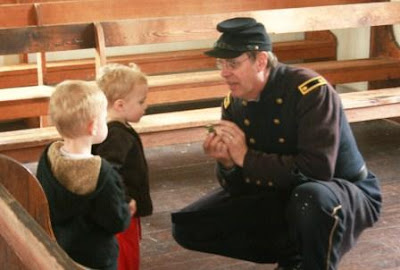 I think some of the reenactors actually camped out over the weekend.﻿ 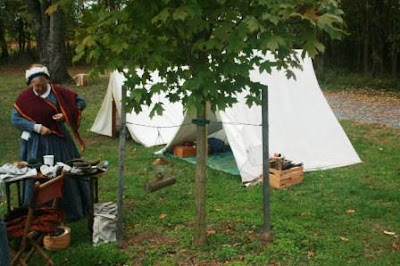 Ringing the bell, before hopping in the car for our journey home.
﻿ 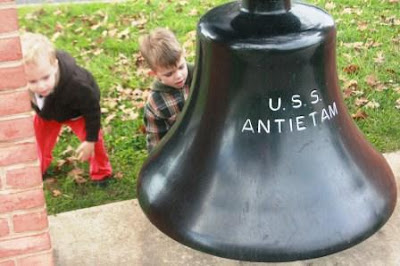 Profound, and a poignant lesson.

You share so much with your boys...you're a wonderful Mom!

Way cool! Gorgeous veiws and a history lesson for the boys! Have a great day! Happy Thanksgiving

OH sad but great history lesson. I love that you share this with your boys they are so lucky.
I do hope your injury is coming along.
Happy Thanksgiving Lisa to you and your family. B

I would love to go to a reencatment of the Civil War. I don't know of any that are close to me, but I am going to keep this place in mind because we travel quite often.

The boys have learned of much!

Wow, what a great history lesson for the boys! I can't wait to do things like this with my boys.

Amazing history to learn, I enjoy civil war history.Sad we had to go through this to install freedom.

Must be awesome to live among so much history. What an opportunity.

it's on our list to go see. i love the photo of the man explaining medicines to your little guys. he looks like he was doing a caring job of it :)

have a happy thanksgiving!

love the stone wall and that massive tree. such sad history.

Thank you for sharing this. I have never been, but I'd like to. One of my ancestors died there.

Your boys will have this in memories in their souls as they get older.

Was nice you educated them and showed them .

They will learn in their walks of life what it all meant as they get older.

I love those jars, there's a cafeteria on my way to work where the nicest lady works, it's called "Wanha Apotek" (Old Pharmacy), I assume that was a drugstore in old times, as they have racks full of old jars.. they make such good pastries..

Indeed! Why have I never heard about this battle, I wonder? Maybe I was goofing off in history class. Gosh, what a horrible loss of such magnitude.

Amazing history right near you. The Civil War was such a travesty. They thought that was the only way to work out differences back then.

Yes, my grandson's expression is what gets me. Just a stare of "what the heck are you guys doing to me?"

I bet the boys loved seeing the re-enactors. Brings the whole thing to life, doesn't it? Hope you and your family have a very happy Thanksgiving!

Very cool Lisa. If only that tree could talk...

That is such a great history lesson for your boys. I love apothecary jars as well:)

That is great to have an American history Thanksgiving visit. Happy Day for you all.

Wishing you and your family a blessed Thanksgiving, Lisa.

I like the photo of the bridge, I remember seeing original photos of just after the battle, it was a nasty waste of men.

Have a lovely Thanksgiving. This is a great share on your post, and it is really pretty amazing to think of the history of these sites!

Excellent photos! I've been to Antietam a couple of times. It's a moving place.

happy thanksgiving! love that bridge and apothecary jars, too... i didn't realize you live "near" (it's all relatve, right?) me. i'm in east tn...

I'm so glad you were able to go back and walk around. Looks like a wonderful place to visit.

The boys will remember this forever. Lisa--a good trip! :)

What an interesting post, your boys weren't the only ones who learnt a lot as an English person I had never even heard about this. Some informative photos too and if only The witness tree could talk. Thanks.