I'm ridiculously late doing my fitness recap for October.  Mostly because it's grim, since I've been injured.  Yes, I ran a marathon in October, but that's practically all I did.

I took a week off after the race, patiently waiting for my leg to heal, but after a week I was done resting.  I wanted to run again.  Unfortunately, my leg has not been having it.  I wallowed and grieved the loss of my daily running.  I didn't want to crosstrain.  I didn't want to do anything except run.

After a while, though, even the grieving gets old, and it is time to move on.  And so, every few days I try to test out my leg to see where I am.  As it stubbornly continues to groan and moan over anything resembling a run, I am starting to do workout dvds instead.  Sadly, I didn't do many of these in October.  So we'll just call October the big lazy month, and hopefully everything will be more intensive from here on out.

Incidentally, I've started doing Shred quite a bit in November, and the boys LOVE it.  It certainly goes by much faster watching the boys have such a great time. 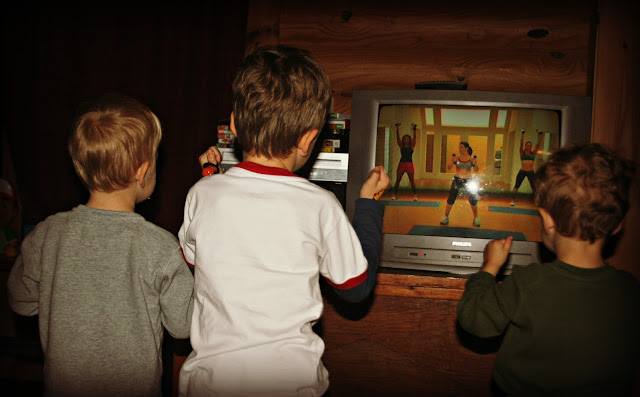 I hope that my leg starts healing soon.  I miss running.  Working out to dvds is like eating canned biscuits - it just can't compare if you've had the real thing.

How do you deal with disappointments, reader?  Do you allow yourself a few days to wallow before picking yourself up and moving on?

I think you have to allow the wallow period.. then move forward doing whatever it takes to get you back to where you want to be.

Hope you heal quickly and can get back to doing what you love best.

I like yoga dvds. I hope that your leg feels better soon so you can run again! Does Jillian yell at you from the DVD? I feel like that would get me going...

I need to put down the canned biscuits and start moving. I have been so horrible about exercising.

Oh Lisa you will run again but do let yourself heal. I know how disappointed you are I understand disappointments about what your body will and will not let you do.
Take care of yourself "All in good time" my Grandma used to say that. Hugs. B

I'm not a heavy walker as I used to be, and I do recall the days when if I missed a walk that it felt sooo bad. Wish I still had the feet and knees I had back then because I felt the best in my life I had ever felt. I still wallow about THAT!

I know this feeling well- but I have discovered that if I push it, I hurt it, so take time to heal!
Your little guys are so cute working out..how adorable.

I'm sorry. I hope you start feeling better soon. I agree - if you try and push it too early it will be worse in the long run.

I am so impressed. I love to exercise. Unfortunately I am out on a 2 month leave because I have a pinched nerve. You are motivating me once I start up again:)

I definitely wallow for a period. I think that's OK as long as you get back up, which you have done. I hope your leg heals quickly. I know it is very frustrating for you.

Jillian is a cruel, cruel woman. That's what I have to say about that.

i loved your anology, running vs dvd workouts....i guess there really is no comparission.

it's great that the boys can enjoy this with you!!

i wallow and overeat. :)

I would be happy NOT to run. Ha! My disappointments usually revolve around an artistic rejection. But my field is so competitive at least I'm in good company.(the rejects) But a little wallowing is always in order.

I sure do allow a few days to wallow. Then a good swift kick in the pants gets me going! Injuries take time to heal and patience is the best remedy. I hope you have a great week!

I think grieving for our self is part of the healing process. Believe me, with the candida, I have done my fair share.

I'd hate to exercise in front of the TV. That's got to be tough for you, getting through this season of mending.

That girl on the TV kind of looks like you.

Don't get to rammy when you are doing the exercises and make things worse.

So sorry, Lisa. This is one of the worst feelings. And, I feel the same way about workout DVD's. I never feel like I'm getting a good workout if I don't run or do the elliptical. I hope you heal SOON!!!
xoxo

Yes, I wallow in pity until I can't stand myself anymore, then I pick myself up and slough it off. I do hope your leg heals soon since you seem to have a real passion for running.

I love the photo of the boys doing the 30 Day Shred!

I had to take 2 weeks off my 5K training because I re-injured my back. I was disappointed because I knew that could possibly put me back to the beginning again. I don't know a lot about running, but for me, if I don't do it weekly, my endurance isn't great the next time I run.

So sorry you aren't healing as quickly as you'd like. It must be so frustrating. I definitely let myself wallow for a few days if I'm disappointed in something. I think it's a normal and necessary part of getting back in the groove!

Ha! I love seeing your boys doing the workout video!

How sad that it's taking you so much time to heal. Hope your leg is better soon...very soon.

I hope your leg gets better soon!

I broke my foot a few years ago. Then I found out the ankle on that same side is turning in. I had to get a special arch support built for my shoe. It was really hard getting used to. I also got my first ever wart; right on the bottom of that same foot. I had it burned twice, which formed a blister. I read that getting them off with apple cider vinegar works well. So when it came back, that's what I've done. It does work! I was doing really good with fast walking everyday. Now I've resorted to swimming and Family Fitness at the Y.

Um the boys doing the Shred workout it hilarious! I hope your knee starts feeling better soon so you can get back to kicking butt :)

I go through the 5 steps of greif - every. single. time.

Oh, that's tough when an injury prevents you from moving forward. I think you have to rest and get better...then get back to it. I hope you can get back to running again soon! I know how I feel when I can't swim during the week. blech.

There is always a tad bit of wallowing, but then you just get on with it! Cute seeing the boys "workout"!

Hi Lisa, So sorry that your leg is not healing --like you had hoped it would. I know you love to RUN --but have you thought about WALKING for awhile???? Walking is better for our knees/legs... Just a thought.. Bless your heart.
Hugs,
Betsy

Don't stress that leg too much, it is the only one you have.

I hope you heal quickly!

I wallow, and then I regroup and move on. The main thing for you right now is to let your leg heal, and then you will be back to running! Hugs from me too:)

It was your IT band right? For heaven's sake. let your body put it back where it belongs...I know you're itching to get running, but, DVD it for the winter & you'll be brand new in the Spring!...:)JP

I eat too much! lol
You should start taking some walks. :)

I don't want to be a Debbie Downer, but I had to give up running due to a bad back. Age can take its toll. Be prepared to find something else that brings you joy -- but I do hope you are able to continue running if that's what you love. xo