Roanoke Go Outside Festival is a new name for the outdoor festival that we went to last year, and we returned again because it's great (free!) fun for the boys. 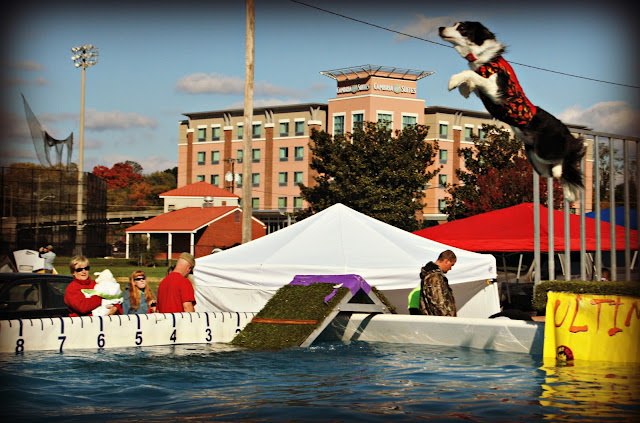 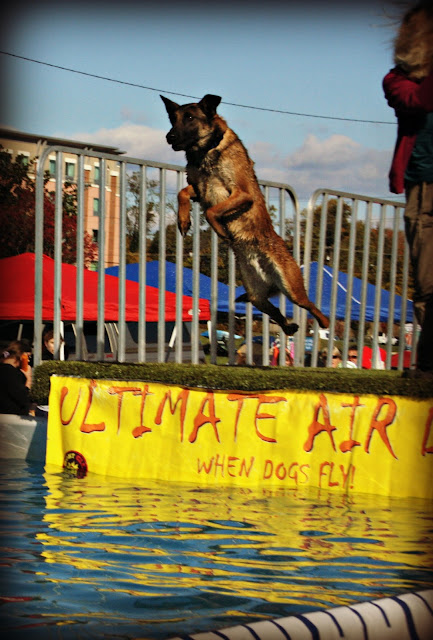 The boys did the slacklines again this year.  It's still pretty tricky for them to stay up for more than 1 second without holding someone's hand. 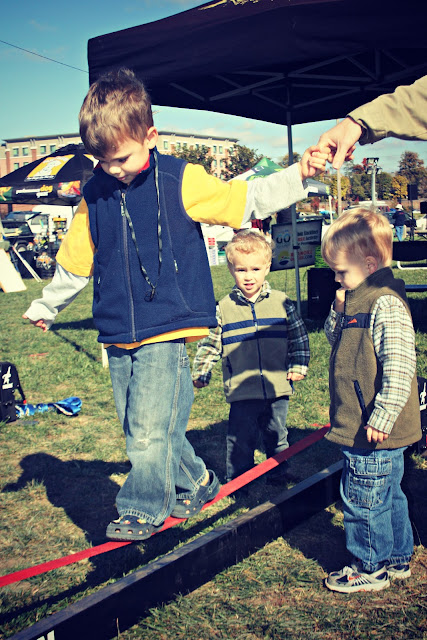 Pierce made a first aid kit.  Then the rest of the day he asked if anyone was bleeding or hurt.  He really wanted the opportunity to bandage us up. 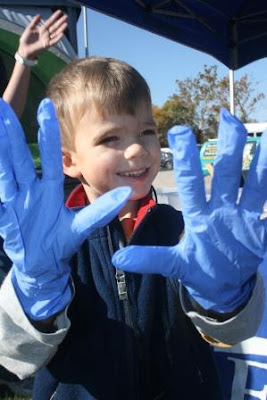 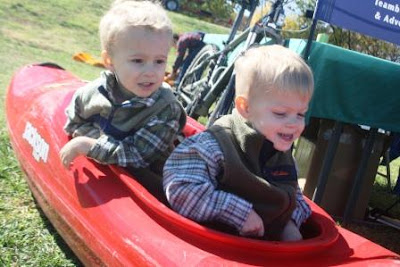 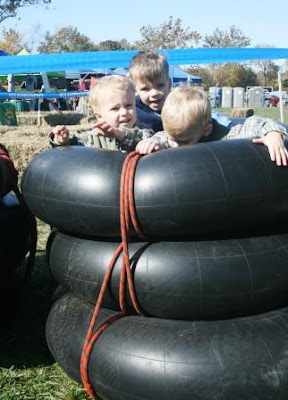 Pierce rode the bull.  He did great - he hung on for quite a long while!  He was nervous about trying it, but I think he had fun. 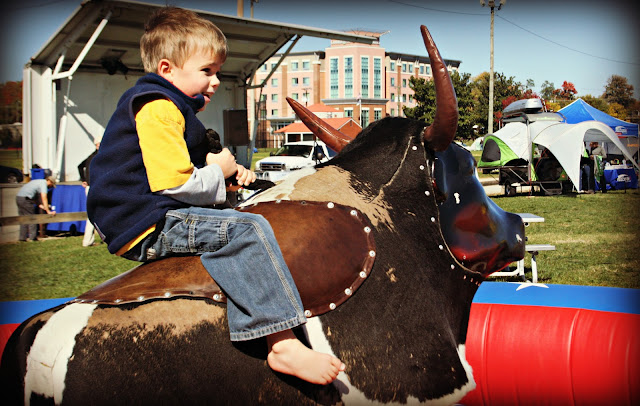 Well, you know if big brother does it, littlest brother has to give bull riding a shot too. 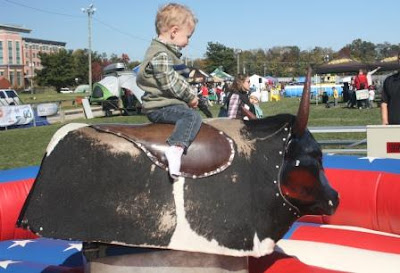 And you know if littlest brother rides a bull, you can be sure that the middle brother is going to get up there too. 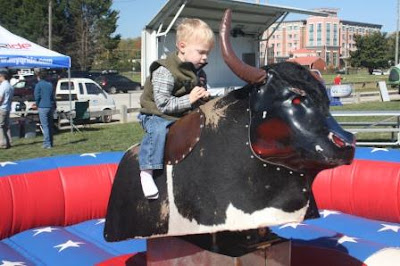 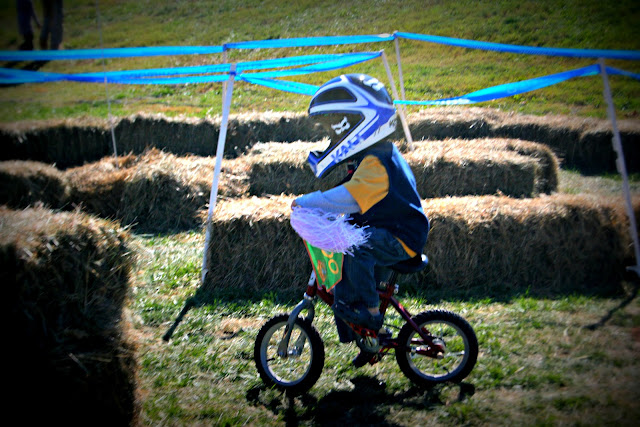 But he sure had a good time.  As we all did! 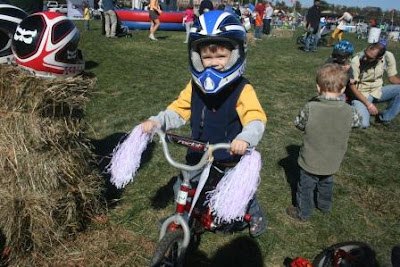 I can't wait to see what they come up with for next year!﻿

Oh I indeed had a great time. Thank you bringing me along. I love the flying dogs and those smiling faces full of adventures that will last forever in their minds. Awesome pics and great moments.

What fun for the boys. I have never seen anything like this in our town.

They look like they had such a good time! Look at those dogs jumping-awesome!

They sure have lots of activities to keep the kids busy. Love the Bull.

This festival looks like so much fun! There was so much to do!

Love the pretend 'going down river'. HA HA what fun for the boys.

I am very impressed with the activities available. They don't have anything like that around Lynchburg that I know of. Love the pics!

What a fun time, looks like a fun one to look forward to.

How fun!! Looks like there was tons of hands-on stuff to do for the kids--which is always a hit.

Bummer about the sumo-wrestling--I would have loved that too!

sounds like a lot of fun stuff for young boys.

How neat, Lisa... As I've said to you many times, your photos and stories about your boys remind me so much of my three when they were little. We did so many of the same kinds of things with them...

Great photos... Love the look on Pierce's face when riding the bull.

Have a wonderful weekend.
Hugs,
Betsy

So sweet! How funny that Pierce was hoping for a bleeder. lol Maybe he'll be a doctor or paramedic one day.

How wonderful to have such a fun event for families and for free too! Looks like everyone had a fabulous time.

These are the cutest photos, Lisa. What a fun event for the boys. Hope you all enjoy the weekend.

Oh my gosh, those pool jumping photos are hilarious! Never seen dogs in pool jumping before but I want to now! Looks like you all had a great time.

Your little guys are so dang cute! I bet they did have a blast there. I love home town gathering things like that! Super.

Fun times with the kiddos!

Wow, they really had a ton of fun activities for people to do. The kids clearly loved it!

I think I would have enjoyed those dogs as well, not so much the bull riding!

Oh my it looks like some awesome fun for boys. I would have loved to try the bull ride. I hope you have a great weekend.

I would have liked to see those jumping dogs! Glad to see the boys had so much fun.

Oh, I LOVE seeing those sweet boys having fun! So precious. :)

What a great event for kids! Your pics are cute too....

I like to watch those water jumping dogs too. Looks like the boys had a great day.

Looks like a lot of fun. Those pool-jumping dogs are CRAZY!

You all have the most wonderful things there and you go to them all and expose those cuties! sandie

Looks like a blast for your boys! I bet your doggy would have enjoyed it as well...next time. :)

wow, looks and sounds like a lot of fun!
what a great event for kids...flying dogs and bull riding the kids clearly loved it!

I am just amazed at how the twins are growing! They must be easier to take places like this now. Looks like such a fun day!

Looks like the boys had a great time and I love the dogs! That had to be fun to watch.

That just sound like an AMAZING Amount of FUN!

Impressed with their bull riding skills. I know I wouldn't have done as well. :)

This event looks like it is perfect for little boys!

these looks like an amazing place!!!! my girls would go crazy there .....

So much fun! Great pictures!

What a fun festival - those dogs are awesome!