The History Museum's Fantasyland in Roanoke

When I was a kid, I remember going to Fantasyland around the holidays.  It was on the top floor of the old Heironomus building in downtown Roanoke, and you walked through paths to see tons of lifesized statues of elves and animals in snowy wonderlands.  The grand hurrah when you came to the end was a visit with Santa himself.

Today, Fantasyland is in the History museum, which is in a different locale than the usual digs, due to the renovation of Center in the Square.  I took the boys because I'd heard such praise from Pierce's principal and one of the secretaries at his school.  They went on and on about how wonderful it is. 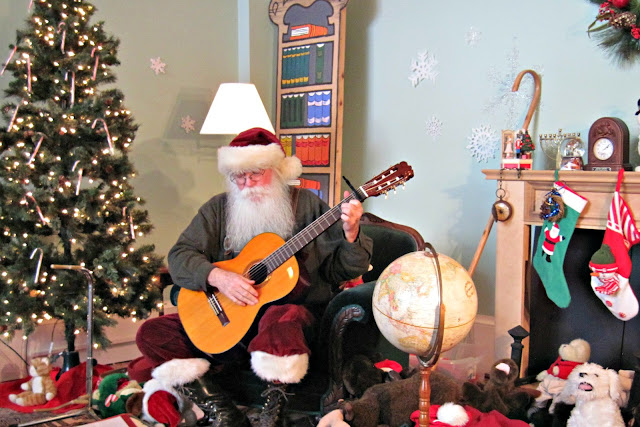 The reason Fantasyland was so amazing wasn't because of all the decorations or all the things to see.  It was because of Santa himself.  He was the real deal.  Fantasyland in the History Museum is more of a show, where kids sit on a rug around Santa while he chats casually with them, plays the guitar and sings songs, and reads them a story about Rudolph's sister, Holly (did you know she has a green nose?).  The program runs about 45 minutes, and during that time you feel like you and Santa are lifelong best buddies, reunited for the first time in a year.

All the other kids there were spellbound in quiet during Santa's performance.  But not my inquisitive Pierce.  He kept raising his hands with questions.
Needless to say, Pierce's philosophic questions got a few chuckles from parents in the crowd, and I myself couldn't stop smiling in amusement. 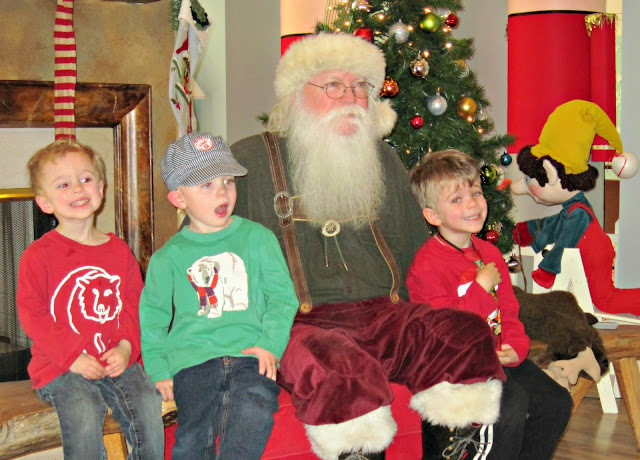 The thing that struck me most about this Santa was how deepfelt and caring he was.  He spoke frequently about the importance of kindness to others, giving hugs, and how to make someone sad feel better.  He had the most tender and loving voice, and I adored how he was able to portray the emotions of giving back to these young children.

So if you head to Fantasyland in Roanoke this year, don't expect to be wowed by various displays and decorations, but instead expect to leave with a warmed heart and a new inspired hope for humanity.  Just the way the holiday season should be.  Thank you, dear Santa.

Such a positive way to spend time with children! Your boys look very happy with Santa.

Oh Lisa you are such a good Mom to let your boys experience all the good fun things from your childhood.
I think this Santa was the perfect choice. Pierce sure is an inquisitive little guy. I like that. Your boys look adorable. Merry Christmas Lisa to you and your family. Hug B

This sounds wonderful. I love all the questions he asked.

Looks like so much fun and the boys look so happy! Have a Merry Christmas to you and all of your crew!!

THAT looks supremely better than the mall experience. Impressive.

Looks like you had such a good time and your boys look happy..

What a wonderful Santa! I think it's great that he taught the children about kindness and giving back. And I love Pierce's questions!

Oh wow! Your kids will always remember this. Merry Christmas!

It sounds like the true meaning of Christmas was shining through. Precious and priceless, just like those dear boys of yours, Lisa:)

I got tears in my eyes as I read about the awesome Santa. I'm so glad your boys got to experience it!

could those boys be any cuter??

and what a wonderful santa!!

This looks amazing! I had not heard of it before. Well, Pierce certainly asks some piercing questions!!! All very good, logical and well thought out!

How precious your sons are, Lisa. Merry, merry Christmas.

This is so sweet! I love that Santa plays the guitar. How cool!

Really cute photo of your boys and Santa :) Merry Christmas!

Sometimes we need reminders to take time out and share kindness with others.What a great time you had.

It's good to know that there are warm hearts and some humanity out there!!! Christmas hugs to all, Baby Girl!!!...:)JP

Oh my gosh, what precious pictures!

What a lovely place to take the kids for an ol' fashioned dose of holiday spirit.

Wishing you and your family a wonderful holiday season, Lisa.

Great Picture Lisa!! Bet the boys are going to be especially good now that they have seen Santa.

They will remember that time with Santa and cherish it! That's how the Santa we seen over the weekend was with my son only he had a one on one conversation with him. It was priceless!

Just tonight we went to a place called Kranaks that is kind of like this. I need to post about it soon.

Okay this was really fun to see - he did look like the real Santa- I can see why they liked it so much. Hope they are feeling better.

Ahhhhhhhh... Love that last picture of the boys with Santa... Awesome!!!

I wish for you a very blessed happy Christmas.

God bless you and yours.
BShell/Isabel

What an adorable boy Pierce is!! And I would have certainly loved to see this Santa, he sounds very good. Have a wonderful day Lisa :)

Oh, Lisa, I'm so glad you shared this with us. After all the bad news we keep hearing, it's so good to hear something positive. This brought tears to my eyes. Just to see these beautiful children with Santa (who by the way projects such a warm and loving presence in the photos), warmed my heart and brought a smile to my face. Really. Such a beautiful post. And I absolutely think Pierce is a bright young man. He asked great questions. Loved this entire post. Can't say that enough. Thank you.

What a wonderful experience! I love Pierce's questions! :)

I love that Santa picture!

Awww....how wonderful! Every child should be able to experience such a great Santa!!

We have a children's farm nearby and each year, they have a Bethlehem walk. You take a self-guided tour through the barn yard and barns, petting all the sheep, chickens, pigs, cows, etc. while people dressed as shepards guide you along.

Then, you pass the donkey in his stall and begin to hear the angels softly singing Christmas carols. In one of the horses stalls, there is a wee manger--including a real-live baby Jesus, Mary and Joseph. It is so sweet, and so real....and oh, so important for the kids to experience.

It is one of my favorite things to do each year.

How wonderful, Lisa! I wish there was something like that around here. Pierce is amazing, and very articulate!

I wish you all a Merry Christmas, and a blessed new year.

Don't you wish everyone in the world was as kind as that Santa.
The world would be so different.
What beautiful photos of the boys with Santa..
thank you for sharing
love
tweedles

Haven't been on my blog for such along time.. But I came to one of my favorites right away.. What a wonderful Santa..Your boys look so happy...That looks like a great place to go to and such great memories your boys will always have by going to this place..and seeing Santa.. You are such a great Mom..
Have a great Christmas.. ta ta for now from Iowa:)

Well I didn't know Santa played a guitar... how cool.

Oh, I forgot to tell you all Merry Christmas!! Wishing much joy and fun in the season. :)

What fun for the boys! Merry Christmas!