The twins recently had their Spring field trip.  We went to the duck pond in Salem, followed by a nearby playground.  They had a lot of fun, even though the ducks were a bit overfed by the 20-some preschoolers and didn't eat much of the bread we brought.

This duck was bathing himself, and did the head-swoop underwater.  I caught him just as he came up, with water splashing over his back. 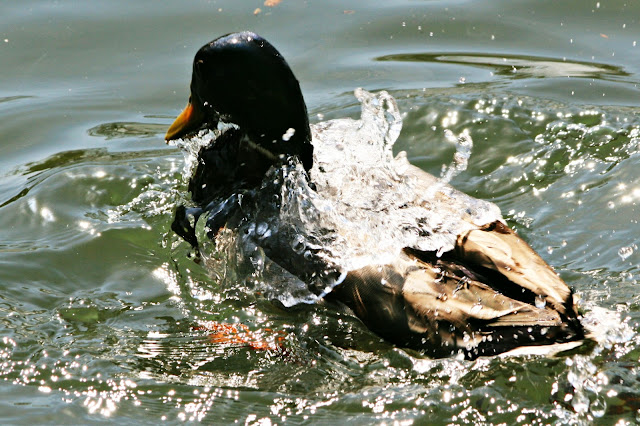 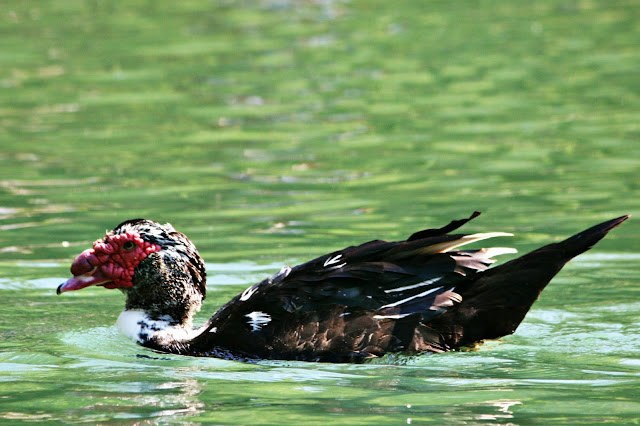 There were tons of cute babies swimming around. 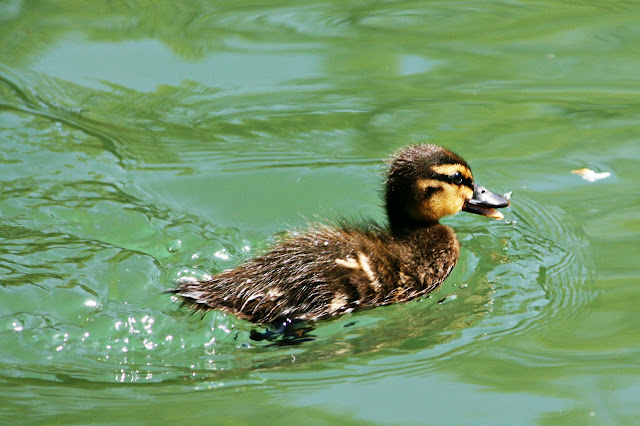 And a few ducks showed off their feathers.﻿ 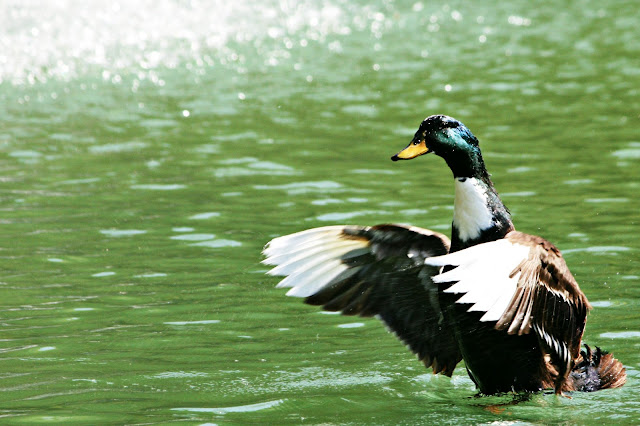 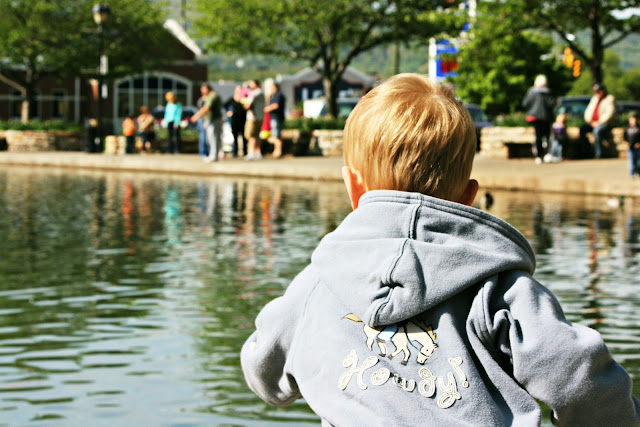 This duck had a fancy cap on her head.﻿ 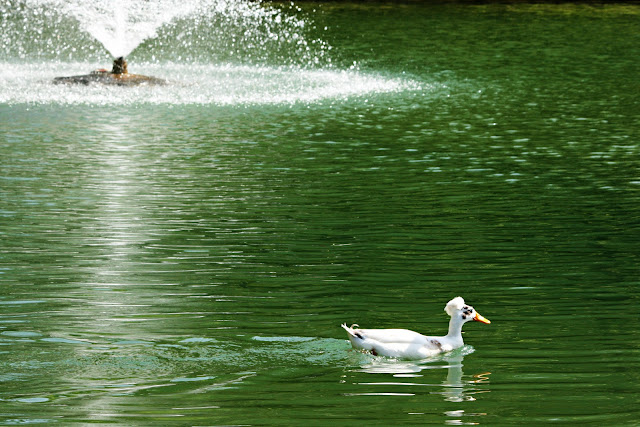 And Cort tossed in some leftover rhubarb cake.﻿ 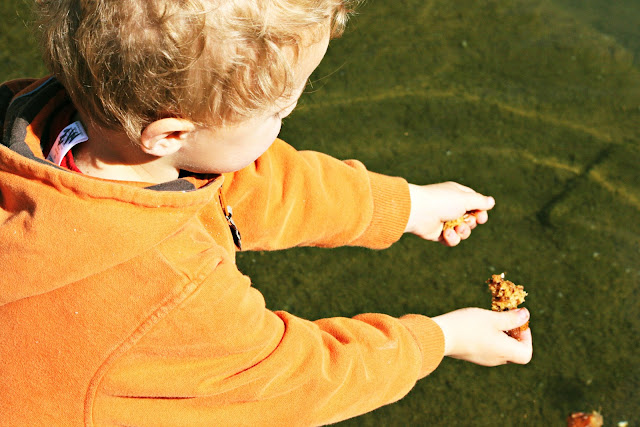 Ducks are really fun to photograph.  I think we should go there more often.  Especially since neither child fell in (something I was worried about, at times, as they walked along the edge).﻿ 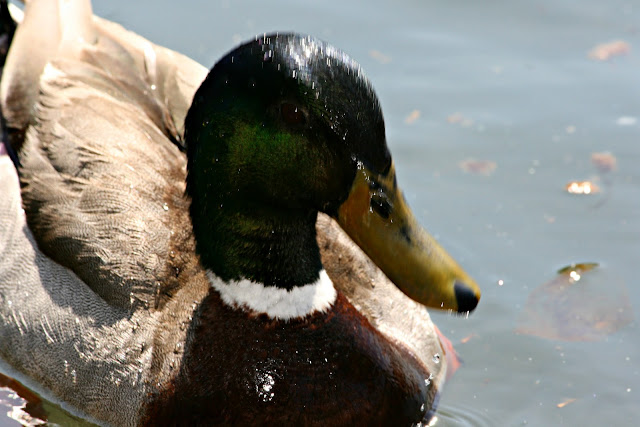 Especially if it leads to a miracle nap on the way home! 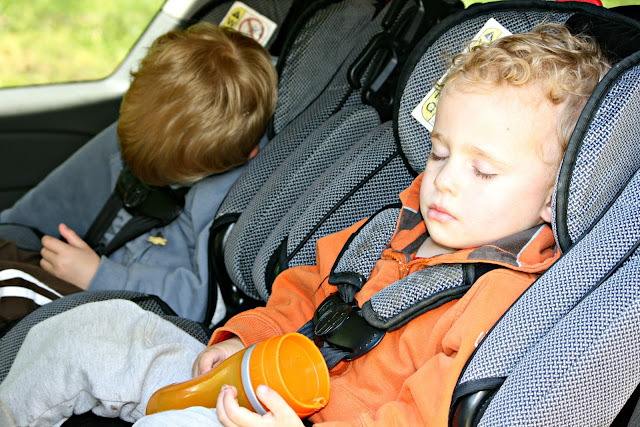 Readers, any of you find it fun to watch ducks?﻿

I love duckies, and they make great photo subjects! Quack!

Ducks are always fun...geese, on the other hand, are scary and mean!

Yes, I do love to watch ducks. But even more fun is watching kids watching ducks. :))

You have such wonderful pictures of this trip! I love that the twins took at nap.

It's a fun activity and perfect for the kiddoes. Sometimes geese can be a little demanding for food--a gaggle of them scared my children once. But overall, an enjoyable outing. :)

I miss the ducks at the pond/park where we lived before. These are great photo's, Lisa. Look at those baby boys all tuckered out from so much fun. :)

What a cool shot of that duck coming up out of the water. My camera would miss the whole thing.

Those are some great captures of the ducks! I love the first picture! I too love watching ducks and should do it more often. My field trip wouldn't have resulted in the sleeping kids in the back seat though! Mine would have been saying he's touching me! lol

Oh my goodness- they were sure worn out! Fun day for the kiddos.

I love to watch the dicks too - and the boys - how precious falling asleep. sandie

I love to watch ducks. But that second one is UGLY!

What was that one? a cross between a duck and a turkey?

Love the duckies! That last photo is sooo precious! I still take pics of my baby boy, 16, sleeping.:)

I used to walk around a man made lake when I lived in Texas and Mallards would come and go. People on the shore would toss pieces of bread into the lake and enjoy watching the Mallards compete for the bread.

I LOVE that last picture!!! They are so tired out and sweet. I believe the red headed duck is a Muscovy. But I adore that real fancy one with the topknot, I have never seen one like it. LOVE the captures here, especially the first one and the one with spread wings!!!

Oh I love duckies too and I could use a nap myself:) B

Hi Lisa,
Remember me?
I know it has been a while.

These are some gorgeous photo's love them all.
Especially the one of your twins sleeping... (hey what can I say? I am a Mom)
Have a lovely week!

I love watching ducks and my husband has been collecting duck things for years along with all the pictures on his office wall here at our house. Your pictures are awesome and filled with action! Looks like the boys had fun too.

Now I'm curious if the rhubarb cake was a hit or a miss, although since they were overfed, probably a miss by default.

Okay you need to get a couple of ducks for the farm! :)

Oh I love to watch ducks! I can't wait until we can have a pond and some of our own ducks to watch. I loooove your shots! Especially the action photos :)

You got some great shots! I enjoy watching ducks, especially when they dunk down in the water.

That's a great field trip for children I love taking my grandchidren to feed the ducks.
I bet they kept you on your toes being so near water.

I love ducks, and especially to photograph them when they're flapping their wings, like the one you have there.

Lisa, the picture of your sleepy twins just melted my heart! When I was a kid, I loved ducks! I still have the rubber mallard hunting decoy that I bought with allowance money years ago:)

Ohh, you got some really great pictures that day!

Look at those gorgeous sleeping boys of yours. Great photos of the ducks too!

More beautiful shots! What kind of camera are you using? I love these!