Last week the boys and I took a day trip to the Greensboro Science Center, where we met Pam and George (my aunt and uncle) for a day of fun.  I took too many pictures.

There were a few scary moments.  We had to watch out for dinosaurs, giant beetles, and snakes. 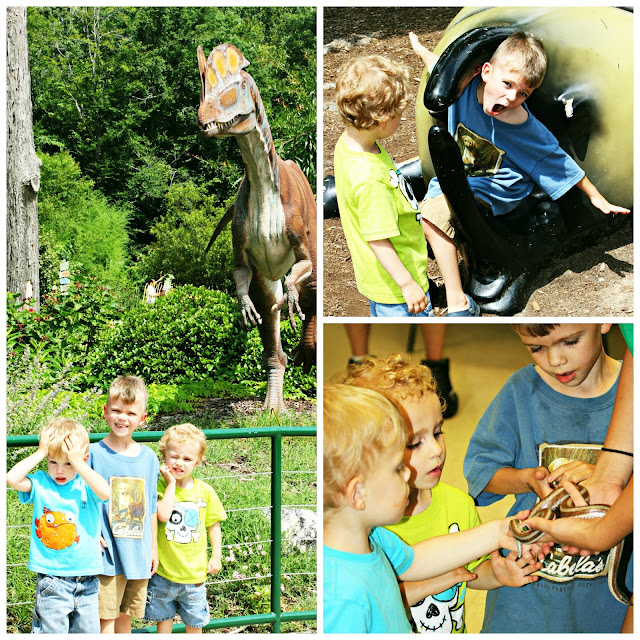 There was plenty of wildlife to be observed.  The boys especially enjoyed brushing the goats, who were remarkably subdued.  I thought the one the twins were brushing was a pregnant female.  Oh did 'she' ever have a big belly.  Triplets for sure!  And then I was informed that all the goats were male.  Whoops, my bad! 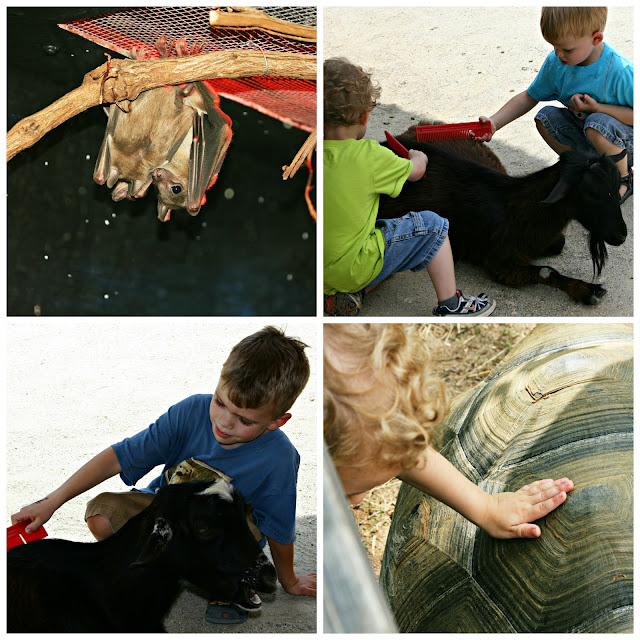 Cort enjoyed petting India the rat.  And we saw a rather strange snapping turtle. 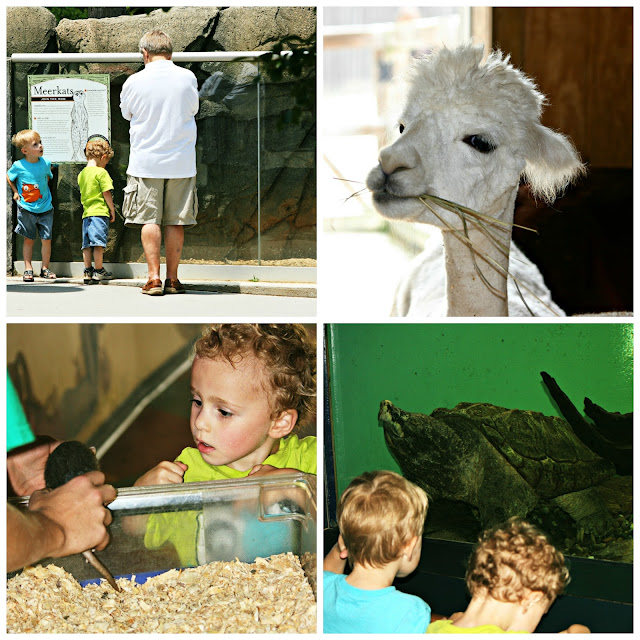 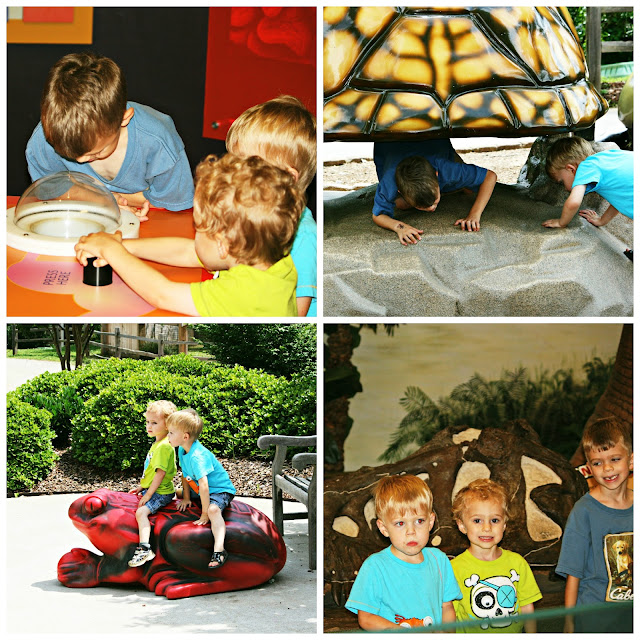 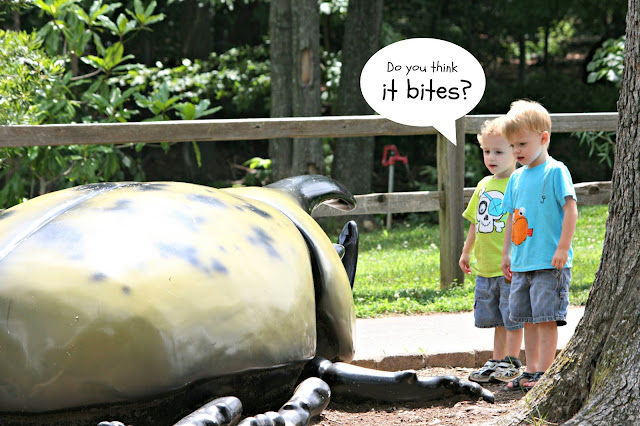 We were there just a few days before the grand opening of their new aquarium, so we hope to make a return trip sometime soon.  The entire place was marvelously hands on and I was impressed by how helpful the staff was and how generous they were in allowing the boys to interact and touch the animals.  If you're in the Greensboro area, I'd highly recommend it (whether you're a kid or not!).

No wonder they enjoyed it so! And why am I not surprised that boys loved the vomit machine? Ha! Nasty!

Holy moose poops! A vomit machine...that makes me gag just thinking about it!! The rest? Adorable. I think you should get a goat or two...it would trim things nicely. The Pres won't let me get any...bummer!!...:)JP

Yes this is the best place we go alot and were thinking of getting a year pass !!! Country park is a nice place to have a picnic it's down the parking lot around the big lake ! Have a great day

JDaniel would love the vomit machine! This really looks like a wonderful place to explore.

That looks like a fabulous place for kids! Something my husband has always said about little boys is that they are endlessly entertained by anything that 'stinks or makes noise'. I guess he would know as he used to be one. But, after reading about the vomit machine I think we need to add 'or looks gross'! :-)

What a fantastic day for you and the boys! I can see the delight in their faces. Typical boys...loving the vomit machine. hehe!

Boys and disgusting bodily functions just seem to go together. ;)

Wow this looks like so much fun and my growing up with six brothers I understand why The Vomit Machine would be such a big hit:) Awesome pics. B

Neat place to take the kids! That snapper is an alligator snapping turtle IIRC.

A vomit machine...well that is new for me :-) But, I bet my kids would have loved it too!

LOOKS LIKE SUCH A FUN TRIP AND YOUR BOYS LOOK AS IF THEY WERE REALLY ENJOYING THEMSELVES. SUCH FUN

Your boys are so normal. Boys and bodily functions that are gross looking, sound or smell gross are one of the things in life they love looking at the most. LOL

What a great place! I used to love taking my kids to places like this. Enjoy their young years, they grow so fast!

Science is better learned as a hands on experience.

A vomit machine! That is total boy heaven.
What a fun trip--and I'd have made the same error about the goats.

What fun to interact with animals like that! But the vomit machine? Gack! Lol.

This looks like the best place ever for kids!!!! And I love the hands on the head post! The giant beetle is totally creepy, and the bat looks like a live on they keep in a cage? I am imagining this is too far away for us to go, but I would if it was closer. What will you be ding for the fourth?whatever it is, you always have a lot of fun!!

wow seems like a real good fun day.
Its true that few things are learnt better when you see them.
xo
z @ kickingkilos.com

i second that. lol

these are all so great pictures.
what a nice place to get the kids!

wishing you a happy and safe 4rth of july!:))

How cool! Love all the photos, especially them with the goats. So neat!

It looks like everyone had a great time! What an awesome place, and so educational.

The vomit machine--When I saw that in your post title, I wondered what in the world that could be. I'm not surprised that the kids loved it. :-)

You are funny, a vomit machine, I had all kinds of inventions in mind before I saw it.

Now that looks like a really fun day. I'm not sure about the vomit thingy but I'm sure it thrills the kids! Love all you pictures.

Sounds like fun! My boys had a kit that they could make vomit with :)

Looks like a wonderful place for little boys to visit - a vomit machine, snakes, turtles, goats - what more could they ask for!

You sure take those sweet boys to not only fun but educational spots.

The twins look like they're catching up to Pierce in the one pic. Getting tall. :)

Oh Lisa, I love seeing all of these photos. Reminds me of the days when my sons were little... Love your little curly headed one. My oldest had curls and he hated them...

Great set of photos and it looks like everyone had a good time.

I have really got to take my grandsons. I am sure they will enjoy checking out the animals and that vomit machine. You sure did get some great photos.

What a wonderful place to visit! I would love to go there! And I'd have thought the goat was pregnant too;)

LOL... that is funny that the best thing for them was a vomit maching. Boys will be boys.

Looks like fun! Great pictures of the boys...they're getting so big!!

I love places like this! I wish Omaha had one. The closest science museum is in Kansas City.

Looks like ya'll had fun! You were in our neck of the woods.