A Superhero Party with Max Steel

Disclaimer:  I participated in a sponsored campaign for One2One Network.  The opinions below are my own.

A few weeks ago we had a superhero party at my house.  We invited a few kids over, and told them to feel free to wear superhero costumes.  I made a superhero city backdrop for picture taking on the outside of the house, using some old boxes and a blue plastic tablecloth from the dollar store. 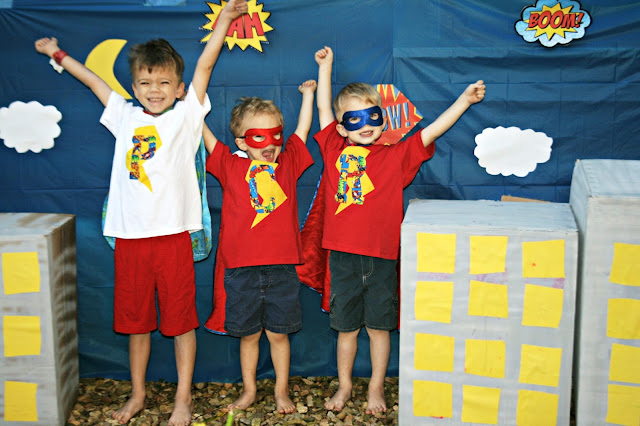 Superheroes have big appetites, so in addition to pizza, wraps and chips, I made some cupcakes.  And then I did party favor bags - each boy got a Max Steel action figure, a coloring book, and I made them all custom superhero shirts and a small bag of superhero soaps. 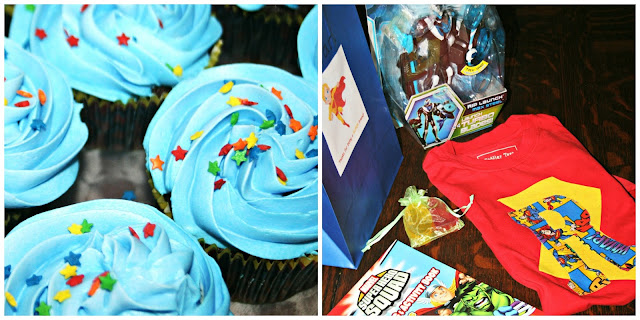 The boys watched a couple of Max Steel episodes.  Have you heard of Max Steel?  He's the new and cool superhero from Mattel.  He's just a normal high school kid until he teams up with Steel - their forces together unlock superhero powers.  One thing the show really emphasizes is teamwork - because Max and Steel have to work together as a team.  While watching the show, the kids were very busy reenacting it with their new action figures.  I will say - those action figures were a HUGE hit (Reid and Pierce are still, even weeks later, carry theirs around constantly). 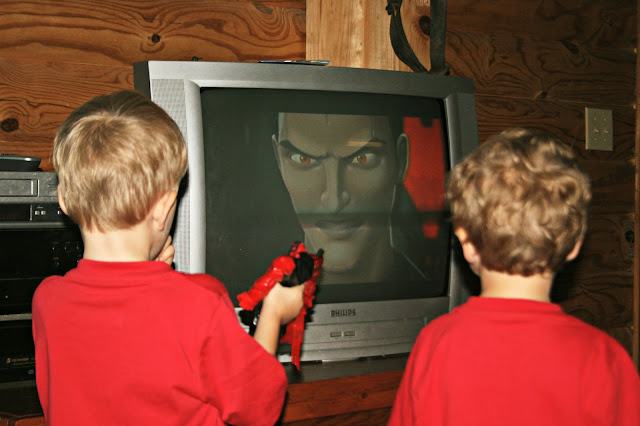 Each action figure has its own special powers.  Hands that shoot off or spin, and by far the overall favorite was the Rip Launch Max Steel, whose spinning discs shot all the way to the top of the ceiling in our A frame log cabin.  The boys were so delighted over this.

In addition to the action figures, we were also provided with a Max Steel sword for the kids to try.  Steel (who Cort is holding in the bottom left picture) can come off the sword, or attach to it (or even attach to a shirt with a safety clip to allow the child a wearable chance to be Max Steel).  The sword is available at stores nationwide and the MSRP is $29.99.  It has built in motion sensors, makes battle sounds, lights up and repeats key phrases from the hit animated series like "Let's Go Turbo!".

The boys were all good with sharing the sword, and everyone had a fun time trying it out.  All the talking and lights and sound effects made it a popular item.

I had a craft station available where the boys could decorate their own superhero masks, or apply superhero tattoos.  They tried this out briefly, but honestly, they were so smitten with the action figures that they didn't stick around the craft table for long! 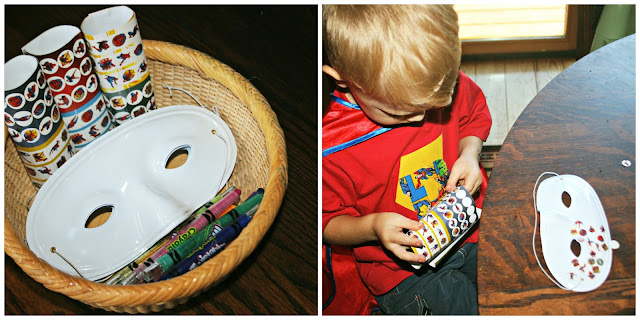 The grand finale for the day was when we gave the boys a chance to "fly" like the real superheroes.  We have been letting Pierce do this for a while now - we hook him up in a rock climbing harness and lift him up into the beams of our A frame.  He loves it.  The other kids were initially a little wary - but they watched Pierce and saw him having so much fun that the two Batmans decided to try it as well.  You should've seen the grins on their faces - these boys were thrilled!

Overall, the party was a huge success, and I don't think any of the kids wanted the fun to end.  If you have little boys, I would definitely recommend a superhero party - what an adventure!

Sounds like the children had loads of fun! Reminds me of how much fun I had with my own, just didn't stay a child long enough!

I love the scene you created for taking photos of all the superheroes.

Love the rock-climbing idea. A safe way to let them do something a little scary.

That would have been so fun to do when I was little but of course we didn't have such things. I am really ignorant on super heroes as we have a daughter and strangely all the kids her age in our surrounding area are girls, no boys.

Your boys are still talking about that party whenever I babysit! Last time I picked the twins up from preschool, they were BOTH Max Steele. I got to drive back to your house with two Max's in carseats in the back. :-) You are so creative with party ideas. Bet nobody else has even gotten to "fly" at a superhero party.

What fun! JDaniel would love to have flown!

Who doesn't love a super hero!
I miss planning children's parties. My babies are all growing up on me!
Looks like they had a great time.

Sounds like fun! Thanks for the Max Steele action figure idea as a gift. Two little Dutch boys will have the time of their lives! Linda@Wetcreek Blog

i bet everyone had a blast - and those invited are still talking about it. :)

Oh my gosh, I have never heard of this cartoon or these figures, so you just helped me out with Christmas... and the boys looked like they were having a blast!

VERY cute! We've done lots of superhero themed parties over the years...in fact, my boys still like to play dress up!

You have got to be the coolest mom on the block. What a great idea for boys. And it doesn't sound like it was too expensive.

You are a master party planner, Lisa! How creative the whole thing was! What fun the boys must have had. :-)

Wow! How fun is this? :). It's great that your boys love the action figures so much, and that teamwork is an emphasis.

HOW do you think of all these cool things? This must be the best boy party ever! No, I never heard of Steel, will it also be a cartoon? As for myself, I would have spent the whole time at the craft table, what a tempting array of stickers and masks.

That was a lot of fun - I remember those days and kind of miss them.

Oh I am way behind in my superhero knowledge. Thanks for the info. You put so much thought and work into this. You are an awesome mom.

How cute! LOVE that the boys had such a fun time. You're a good mommy, Lisa. :)

This looks like so much fun! The perfect party for boys :)

I never heard of Max Steele but it looks like the boys had a great time. I don't see how you work and still devote so much time to your kids. When mine were little, my wife stayed home and I worked two jobs. Now I guess about all mothers have to work and take care of the kids too.

Looks like a fun party, what boy wouldn't enjoy that!!!

I love these photos of all the fun!

You are the super cool MOM... letting your kids have a Super Hero party!!! Looks like they had a great time.

The boys are so cute and look like they are having such a great time!

Looks like fun! And when they are adults, these pictures will delight their friends.

All the personalized details! So fun!

Awesome a superhero party! The boys must have had a super time. I bet my grandsons would be interested in Max Steel.