I Thought He Was So Sweet

For Pierce's 7th birthday, I took him to the rollerskating rink for the first time, which was a lot of fun.  On the way home, we stopped by Barnes and Noble to get the free cupcake he received for being a member of their kid's club.

On the drive home, Pierce told me that he loved me so much, and thanked me for taking him skating.  He said he'd had the best birthday ever.  That kid sure knows how to butter up his mom.  Then, he announced that he was saving half of his cupcake for me.  I said, "That's really thoughtful and sweet of you, but it's your birthday, so you should eat it".  Oh no, he told me, he was saving it for me.

I drove home with warm thoughts of the kid who would save half of his birthday cupcake for his mother.  Until I got home.  And he handed me this: 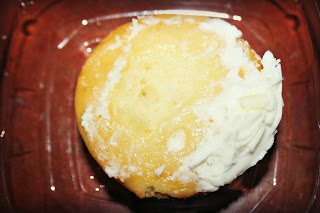 Hmmm.  I guess it's the thought that counts, right?

Carrie took the topping off a cookie and gave me the bottom and told her mother that I wouldn't notice and she is in the 10th grade. It was slightly obvious.

That was so funny and sweet too! Laughed so hard when I saw that! Nade my morning!!!

The top half is JDaniel's favorite part too. I love that your guy wanted to save it for you.

So sweet. So nice. He is a really good boy

Ha ha Your kids are just so cute !!!!! This had me chuckling for sue.

Oh, that Pierce! That is too funny. Happy birthday to your sweet and thoughtful little man. :)

OH my gosh....he is so sweet! And thank you for making my morning start with a big ole' belly laugh!
XO

This gave me a good laugh! I have to say that Pierce is a kid after my own heart--he knows what the best part of the cupcake is! :-)

Aw! Too funny--his heart was in the right place though.

Hey he saved you the cake part!!! lol

ROFL- that kiddo's humor is priceless! What a sweetie- now I know you ate it right? :)

Haha! He is such a ham. I would have melted hearing those sweet things from him though!

It IS the thought that counts! And did you eat it?Because I imagine he would be asking you if you liked it...I just checked out your post I missed, LOVE the last picture of the boys with the corn!!!

He reminds me so much of my Kyle. Watch out girls! lol
Very sweet!

Lol! What a sweetheart! His favorite half is the same as mine!

So funny! Sweet as well...and he did save half of it for you, in a way. LOL

omg, that is hilarious!!!! It's the thought that counts?

LOL. What a pathetic and sad cupcake.

Hi Lisa,
I am sure Pierce must have had lots of fun on his birthday.
He was so sweet saving some birthday cake for you.
I truly enjoy going through your blog posts, Lisa.
You have gorgeous children.
You are so blessed with your dear family, sweetheart.
You are a beautiful lady too.
Have a Happy Halloween with your kids, family and friends!
Greetings from Starry.

Totally the thought that counts!

Happy Belated Birthday to him.

Hahahhahaha.... he licked the frosting off. Priceless!

Ohhhhhh Fun! Give him a big hug for me! He saved you the "healthy" half! Hugs, Linda@Wetcreek Blog