1.  Another picture from the 40s.  I'm not sure what kind of bird this is.  In the original picture, you can see that the beak of this bird is long and hook-shaped. 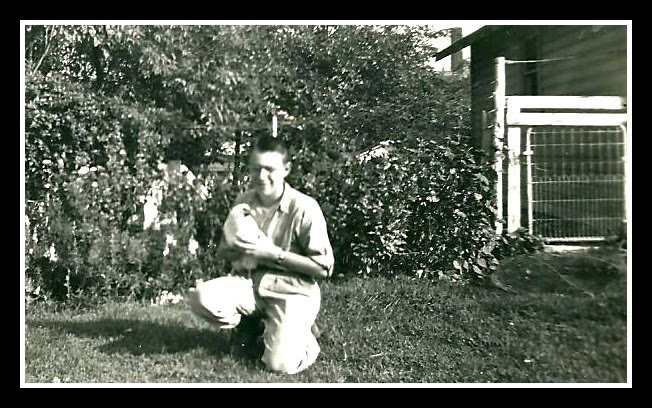 2.  A few weeks ago I took the boys for haircuts.  Normally I do this myself, but I admittedly don't do the best job, and a local hair place was offering $5.99 cuts.  While talking to the 3 different hairdressers as they were cutting the boys' hair, I suggested that Reid get his hair a little spikey on top, like his older brother.  Reid immediately got all upset and said he didn't want spikes.  I said okay, since he seemed to feel very strongly about it, and later I found out that he thought getting spikes would hurt.  Well that makes sense!

3.  We like to watch survival shows.  I have a new favorite.  Dual Survival.  We just watched the second season, and it was my favorite of any season of any survival show I've seen.  They just give really unique and creative tips for all sorts of scenarios.  Plus, they are amusing. In one of the final episodes, Cody and Dave are in Kentucky, and Dave (who refers to himself at times as a hillbilly) says that the P.C. term for hillbillies is Appalachian Americans.  Love it.

4.  The other day I picked out a Taste of Home recipe for dinner, and I didn't pay much attention to it other than that we had all the ingredients.  When I finally went to cook the "nacho cheese bake" I realized as I put it together it was quite possibly one of the most unhealthy meals I had ever made.  Ingredients included egg noodles, green olives, ground beef, nacho cheese soup, cheddar cheese, diced tomatoes, green chilis, tortilla chips, and ranch dressing.  Wouldn't you know - the kids went crazy over it.  They said it was weird, at first glance, but then they cleaned their plates.  They especially liked the green olives in it.  I have to admit - it was good.  Maybe it could be a once a year sort of treat.

5.  Now that it's spring, will it finally stop snowing?

I can't figure that bird out, almost looks like a gull but can't be.
Maybe I will get my beard spiked!
I like Cody on Dual Survival, his barefoot deal seemed strange at first but he is really a smart guy.
How about this weather?

It's a nice old picture. Haircut is a 'hard' thing for my son

The bird looks like a seagull?
Spiked hair that hurts:) funny.
Love survivor shows but not a lot of choice without cable for us, this sounds like a fun one.
All the best tasting meals are bad for you:)
Spring yeah I don't see too much here either:) Hug B

I'm guessing a stray parrot.
Did he get the spikes?
I bet they all looked great after a fresh cut.

again i love the old photo! i imagine spikes would hurt ;) i had a taco casserole recipe that used green olives. it was odd to use green olives but they really tasted good in it! i've since lost the recipe but probably wasn't healthy either lol..have a great weekend!

I have to get a better look at that bird....And I love your randomness today. That dish you made sounds like the unhealthy stuff "I" like to eat. lol

Precious little Reid! Children take everything so literally! I remember my duaghter getting upset when they talked about drinking and driving and drugs at school. She was about 6 years old. She cried and cried becuase every morning I took my coffee with me as I drove her to school and drank it while I was driving - therefore I was literally drinking and driving. Her daddy took his blood pressure at night - therefore he took drugs. She did not understand why it was okay to do these things, she took what her teacher said literally.

Pretty funny on the haircut.

Funny what goes through kids minds!

I always wished I had kept a journal with all of the funny things my girls said over the years
They keep life interesting.

Poor Reid. I bet if you put enough hair product on spikes, they would hurt! :-)

I think I've seen that survivor show. Does one of them live in a cabin in the woods in N.C.?

I had to laugh at your recipe. It sounds delicious, but yeah, lots of creamy fat there. The boys might want to make it a weekly habit. :-)

Hi Lisa,
I also like to see old vintage photos in black and white, especially old films in black and white. I love vintage things!
Your children haircuts are nice.
They are all beautiful boys.
Thank you, Lisa for posting your comments in my blogs posts!
You are a super friend.
Greetings from Poet Starry.

That dinner had its own spikes to it. Reid's wisdom notwithstanding.

awww. spikes would hurt. so cute!

Sounds like a real good and real fattening recipe! Yum! :)

Have a great weekend, Lisa!

Never heard of tasting from home! But if the kids like it ----

Your boys are so fun; I love them.

I hope you all have a blessed weekend, Lisa.

Poor Reid, can you imagine if he tells his friends or teacher that his Mom wanted to give spikes!!!!????...:)JP

It may have been unhealthy, but it sounds delicious!!! I am glad that Reid did not get spikes on his head!!!

I was wondering if you cut the boys hair yourself. I watched a little boy get a Mohawk haircut the other day when I was getting a perm. It was cute but I am sure it won't be when it starts to grow out.

Hi Lisa, Even though we have had a couple of nice days--they say that winter is not over yet... Gads!!!!

That meal does sound delicious --but you are right, probably not too healthy.. It's like those awesome breakfasts I read about on blog posts (fried potatoes, eggs, sausage, gravy, etc.)... I love breakfast ---but just cannot eat that kind of food any longer...

So funny how children take our words so literally! Poor Reid.

Unhealthy dishes make their way into our home here and there too (McDonald's comes to mind, every one of my kids likes that place, ick).

lol at the spikes :)

We have a chance of snow in the middle of the week. And I've seen snow in April so who knows?

He thought spikes would hurt...that's totally reasonable. It's always so interesting to see the world as a child sees it. They can be so literal!

My son is a big fan of Dual Survival. It is a pretty good show!

Love the vintage photo and #4 sounds scrumptious to me. Maybe a twice a year treat:) (Fingers crossed for spring too!)

The spikes made me chuckle! And how logical of him to think that. He was probably wondering why in the world you were suggesting it, lol.

I think that bird might be a seagull but not sure.

Ahh oh ~ those are the kind of meals we have all the time but according to my cholesterol levels I should be having them only once a year lol
As for the weather well our Honey Bee here at the farm is giving out forecast faces ...

I love that: Appalachian Americans. Thanks for expanding my vocabulary.

The Mrs. gives the boys haircuts here as well. Messy. The little girl does get to go to a professional though.

Appalachian American, love it! Your recipe does sound heavy - but it had tomatoes, that's healthy, right?

I got a chuckle out of the spike hurting comment. :)
The PC term is perfect!!!

I think my son would love the casserole too.