Every summer I take the boys down to Greensboro to spend a fun day with my aunt and uncle, Pam and George.  This year, they took us to the Greensboro Science Center.  It had some new exhibits since we were there last year. 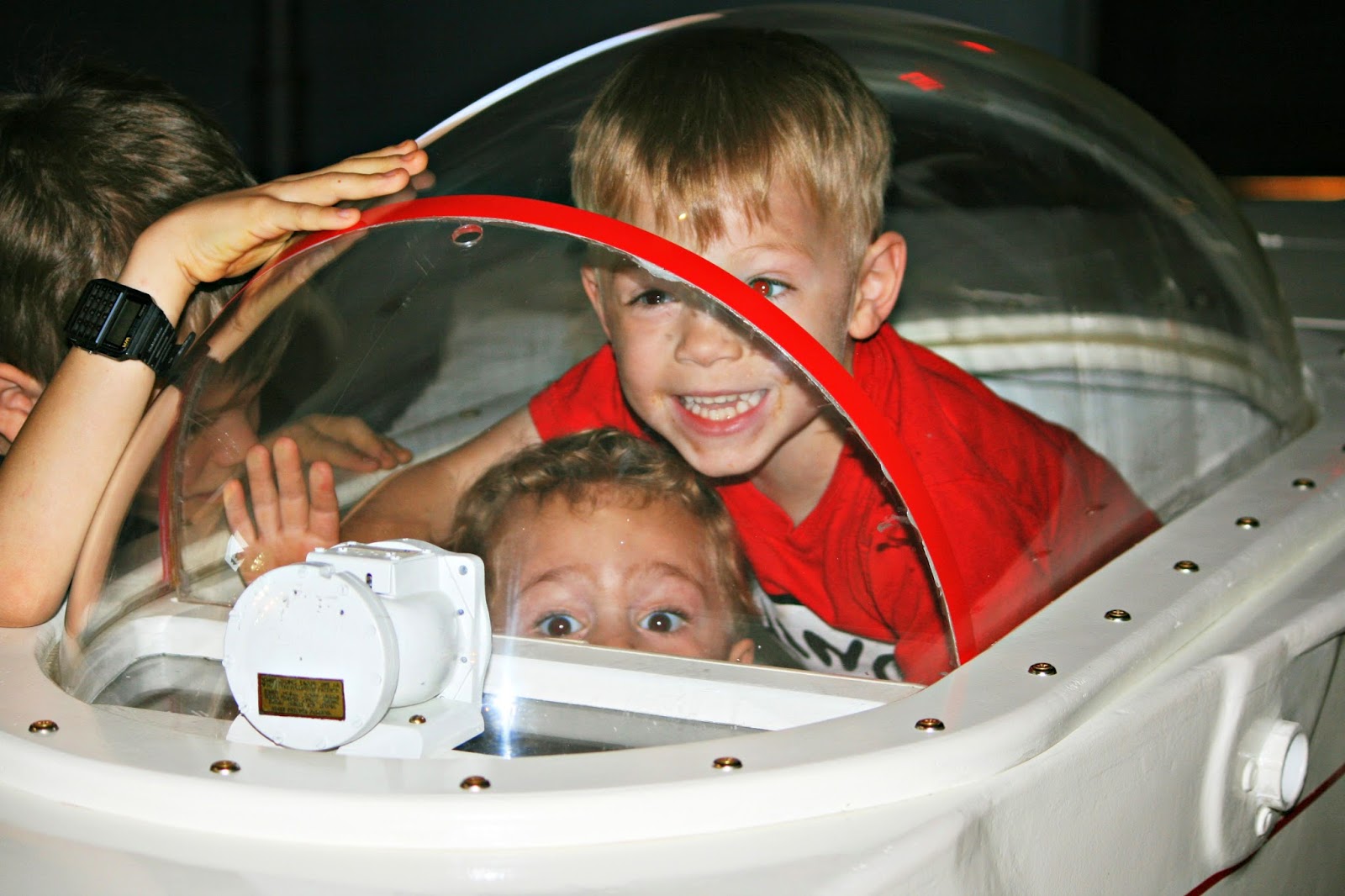 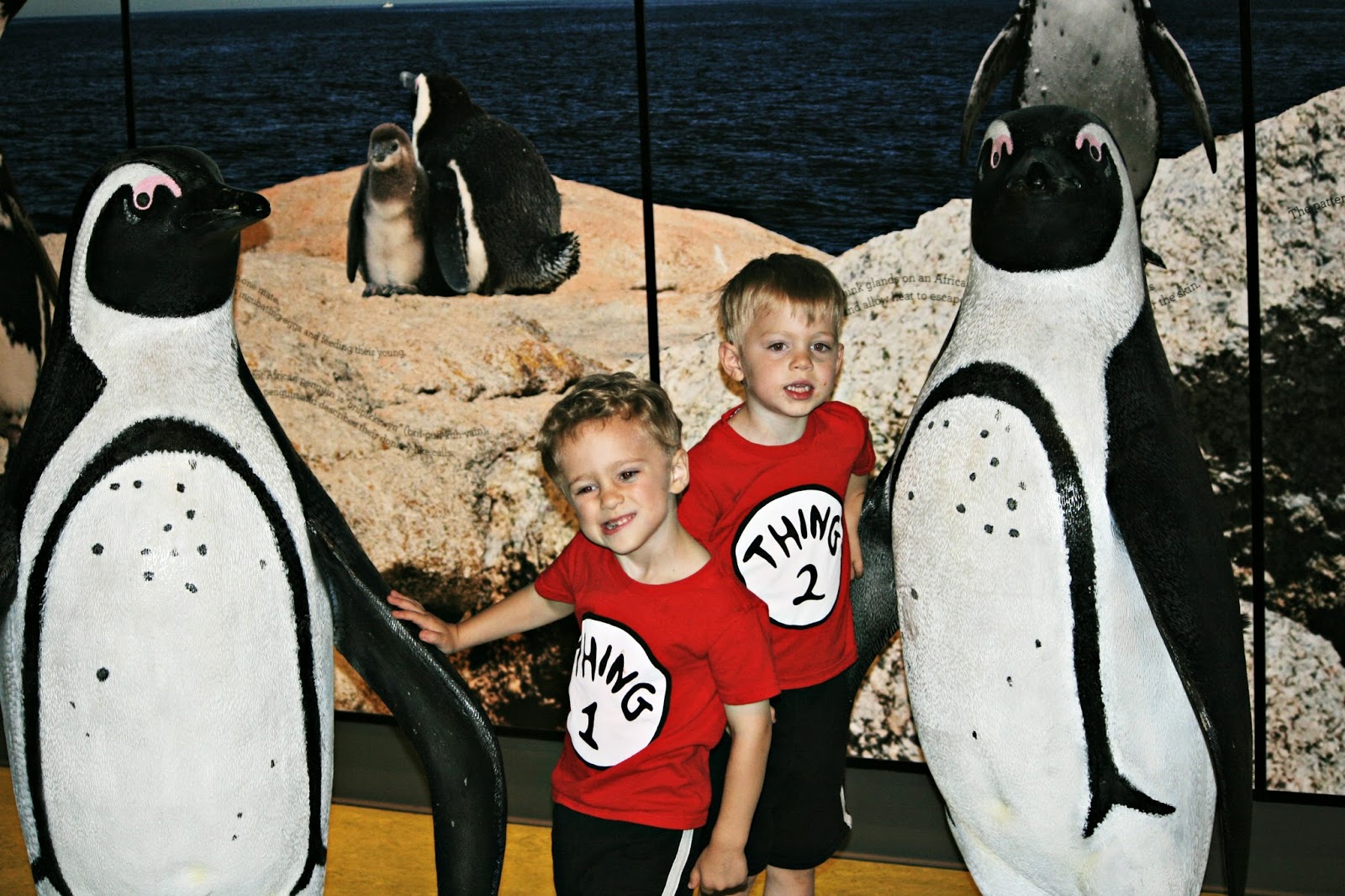 And stingrays.  And a tank of sharks with a real diver that the boys just loved.  ﻿ 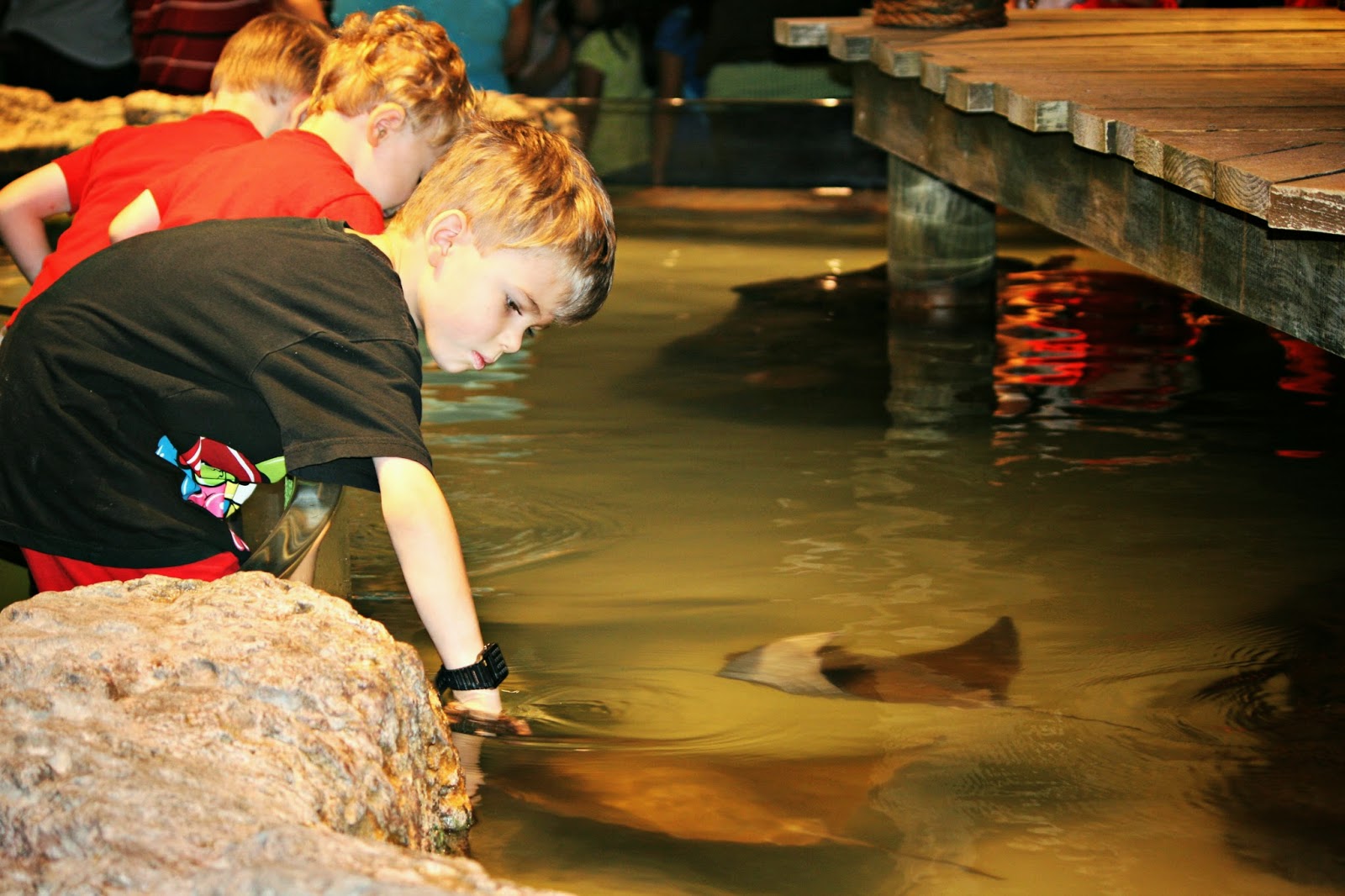 But what was really cool was the new pirate exhibit.  The boys got to look through telescopes to try to spot the pirate ship.  And I enjoyed looking at cases filled with various treasures brought up from sunken ships.﻿ 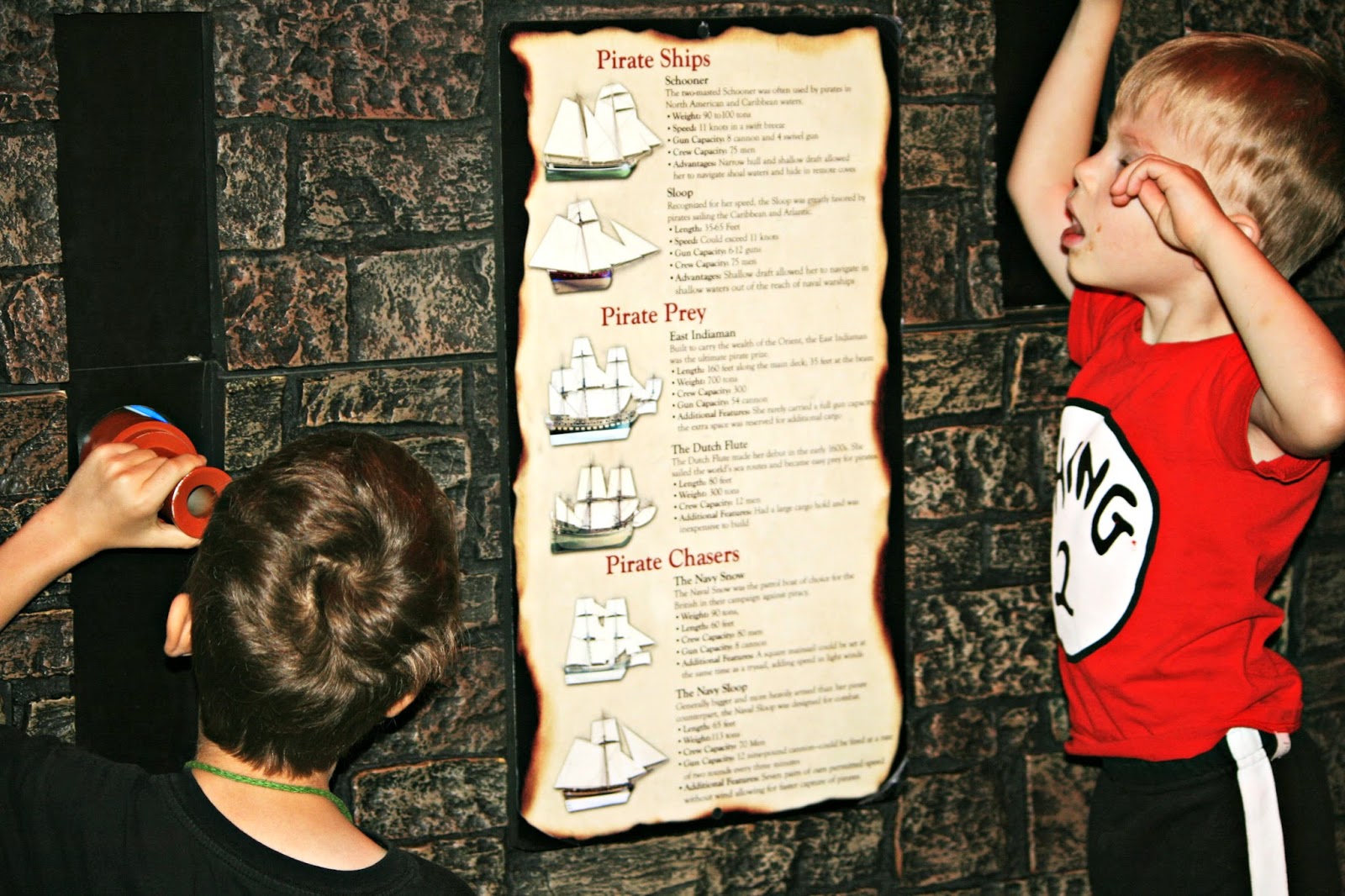 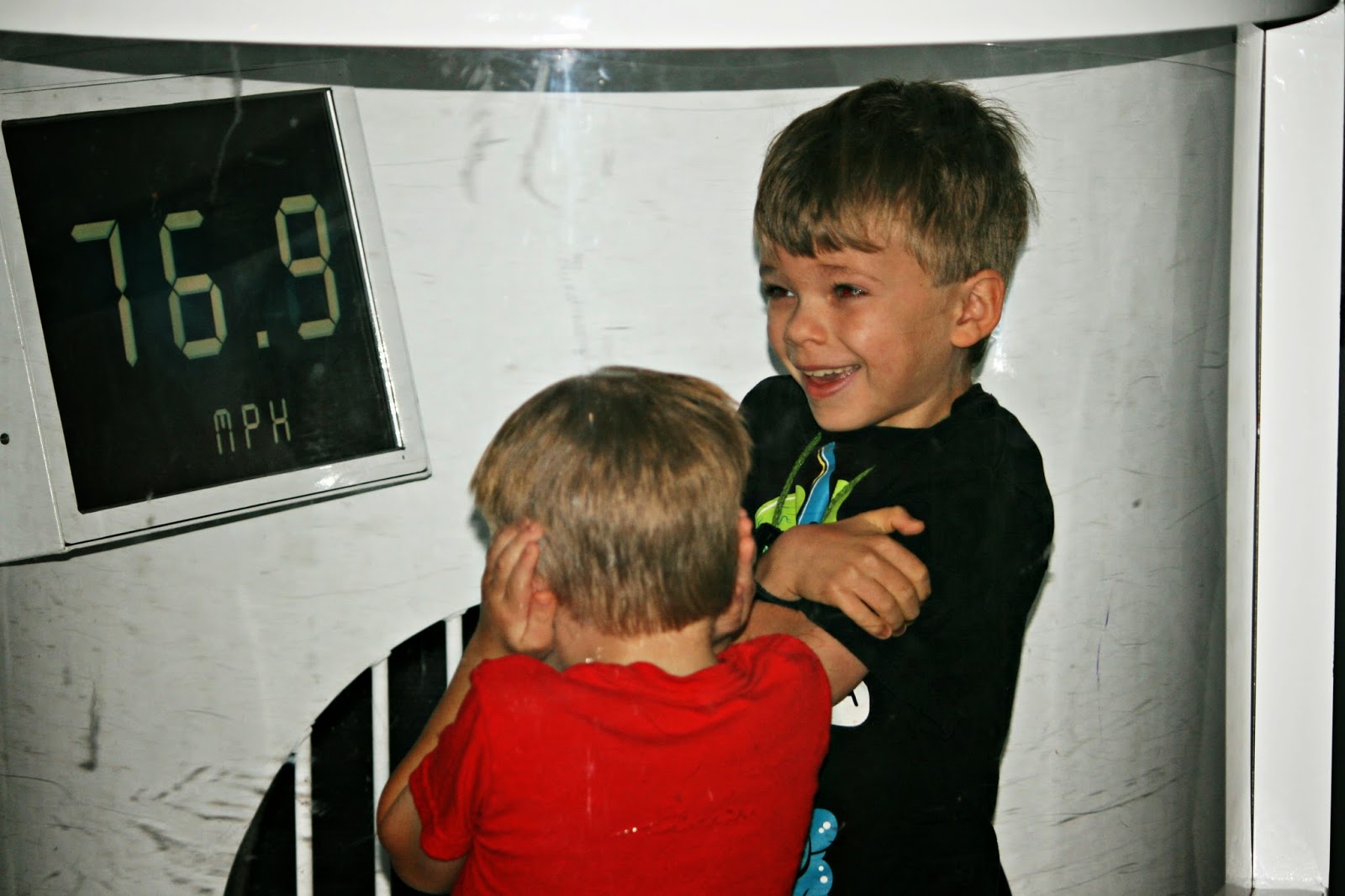 Pierce learned how to work a robotic arm, and used it to pick up a coin and deposit it in a bucket.﻿ 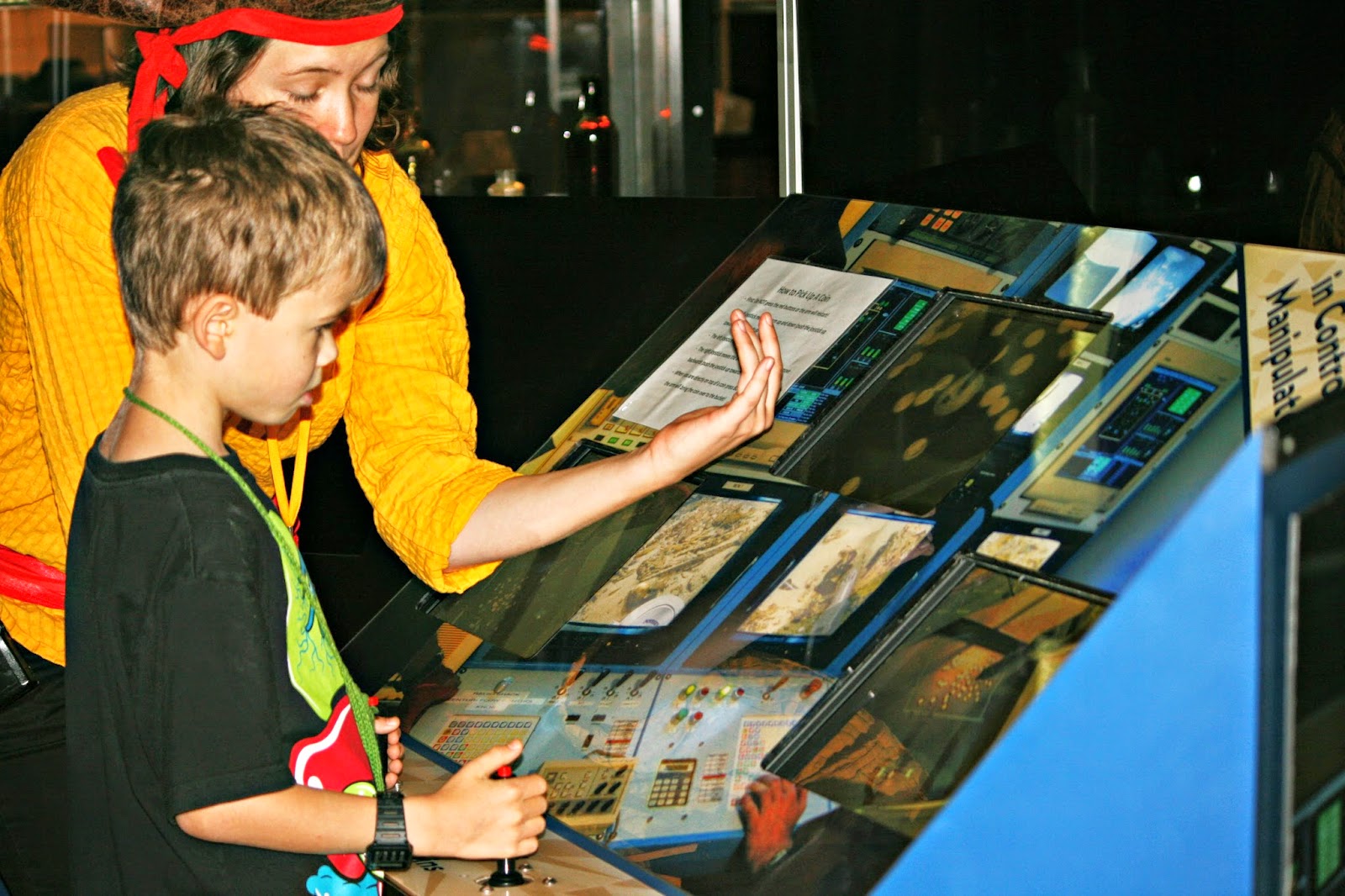 Outside, there was some leap frogging.
And I fell in love with the smartest cockatoo.  He came right over to me and when I whistled, he whistled back.  Cort and I played with him for a while, but when we went to leave he threw a terrible tantrum.  I have never heard such a racket.  In the end, we stayed for a while longer because we felt too guilty to walk away.  If you go to the Greensboro Science Center, be sure to visit the cockatoo!  He's a real charmer, and he seemed desperate for attention.﻿ 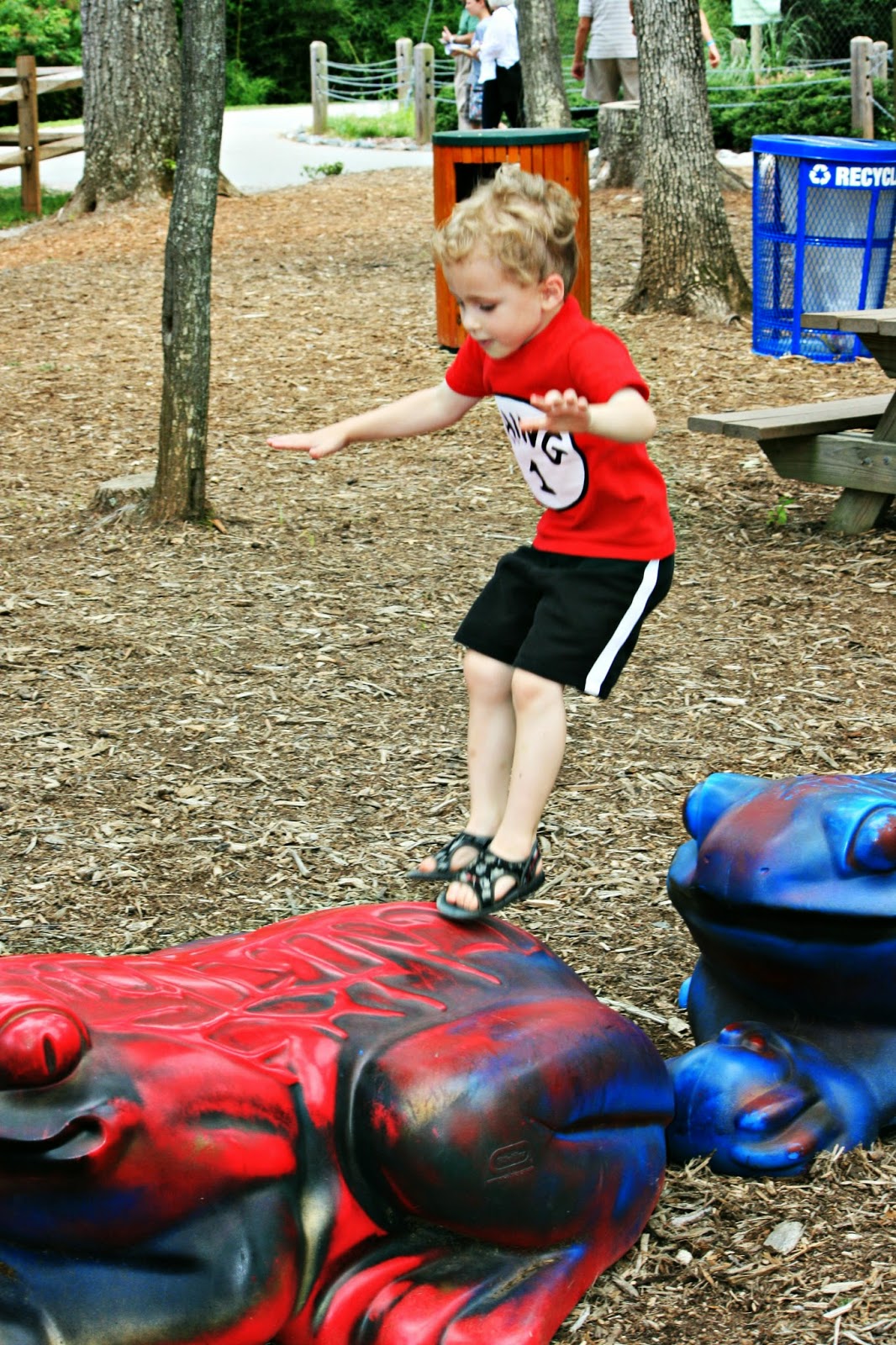 The boys groomed the little goats for a while.﻿ 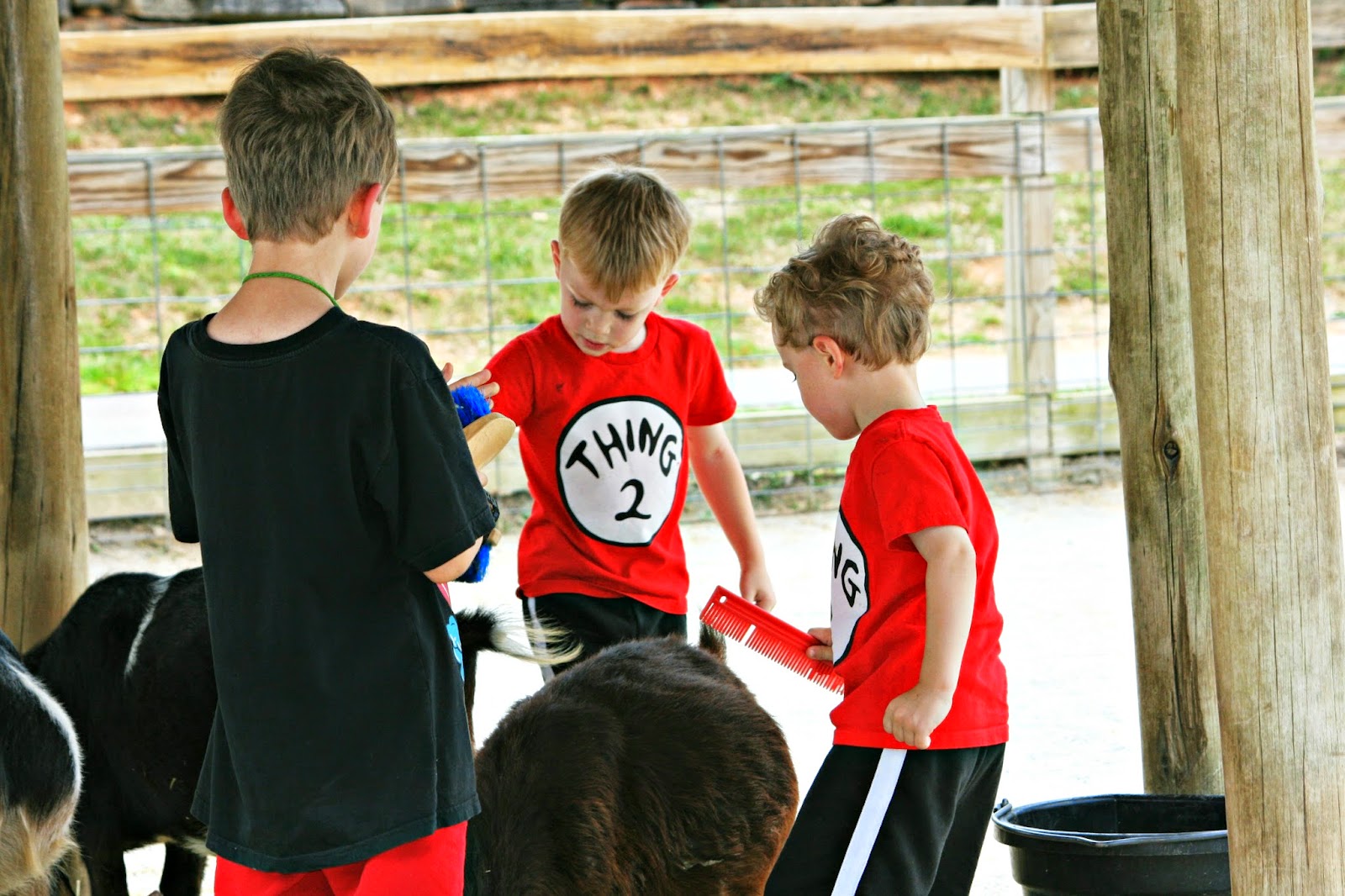 And took one last shot as pirates before heading out to lunch.﻿ 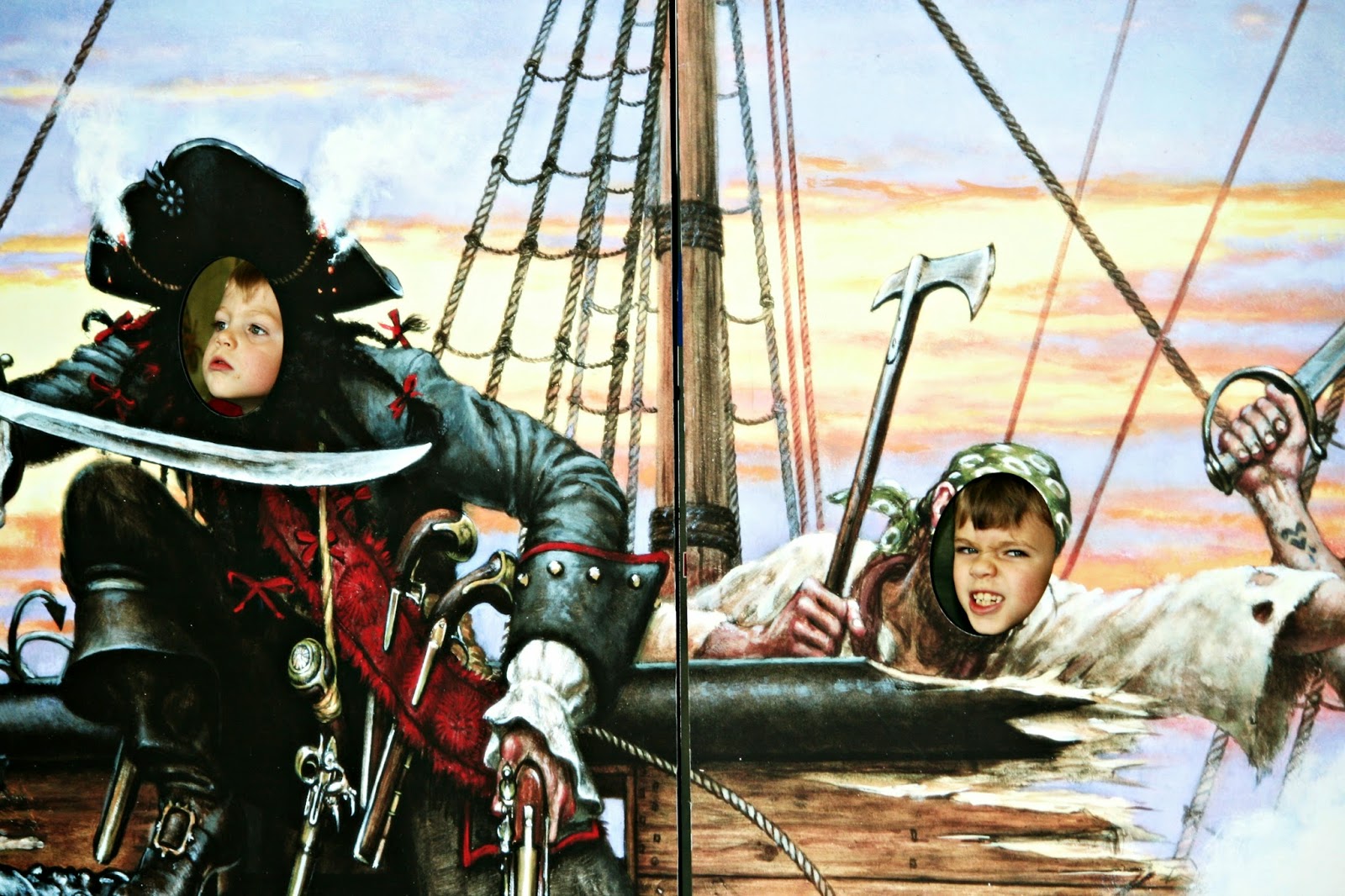 What a great time we had with Pam and George!﻿

Sounds like a great time. Love that last picture. Started my day with a smile!

What a fun time. You captured some great photos.

Every time I babysit, they tell me all about their day at the science museum. You will never guess what they talk about the most, after that diver. DONUTS! Yep. They tell me Pam and George got them lots and lots of donuts. :-)

Oh I also had great fun watching the boys with Pam and George:) Great shots they are having fun it shows. Hug B

Wow! This looks like a wonderful place to play!

What a great place. I could see my granddaughters enjoying that when they get a little older.

you always make sure your kids get the coolest experiences!

What a fantastic time you all had with George and Pam... (Anyone named George has to be a great guy!!!1)

Your boys are adorable... I can just see their little minds/brains taking in all of that wonderful stuff....

Thing One and Thing Two???? Love the T-shirts.. Made me laugh outloud.

What a fabulous field trip!!!! You love them dearly, I can tell!

This is an awesome place! I am going to Google it and see how close it is, I would love to go. Maybe I am in my second childhood, you think? I love the first and last pictures, they are my favorites. But they are ALL splendid! I love the cockatoo story!

Aw, what a great time for all! I always like hearing (and seeing) the adventures. :)

How fun for you and the boys. I hope the cockatoo was just pulling your leg. :)

What an awesome place! I loved seeing your boys' smiles. Are those Cort's eyes looking up in the first photo? So cute. :-) I would like to try the hurricane machine too.

Sure beats setting around all day watching TV and playing with electronics as so many kids do. Lots of fun!

What a great day. I miss these kinds of outings, now that my kids are older.

aww, what fun. i love all their changing faces. the boys look like they had a ball. love the frogs. or were they toads? ( :

Love the frog hopping pic! Kyle grew up visiting the Orlando Science Center, I would learn with him. :)
Great pics!

That does all look like fun. I like the pictures. The first one w/your little one barely able to see over made me laugh. :)

Wow. The fun and learning just went on and on!

Looks like an amazing event. I like all the hands on activities for the kids. I am sure they look forward to it yearly.

Those are great pirates of yours. They know how to spot a ship, and how to survive a hurricane, and pet the stingrays and goats. Looks like you had a wonderful visit.

Even the cockatoos enjoy your company, Lisa! Looks like a world of fun there. We will be petting stingrays at the Texas State Aquarium in a few weeks--always a hit with the kids.

I love interactive museums that are kid friendly! I got to take a private tour of an interactive kids museum in January in Brooklyn and it was amazing! If you want kids to want to learn, you have to make it super fun! :)

What a great time! It looks like the perfect place for learning and entertainment. This reminds me that we should be visiting our local science museum soon...

how fun! we're gonna have to go see that!

Hi Lisa,
It looks like your boys were having lots of fun there.
Your children are a real blessing, sweet friend Lisa.
Have a lovely weekend with your dear family and beloved ones!
It's August already...
Next month in September, it'll be fall time...
Warm Hugs,
Starry.

Honestly, we never had cool places like this where I grew up. I enjoyed the first photo right off the bat because it reminded me of old re-runs of the kids show "Supercar"! :)