Francie Gets a New Feeding Paddock

Since Francie is small, and Phoenix is fat, I have to separate them when I feed Francie twice a day.  Phoenix would steal her food otherwise, and he definitely doesn't need extra calories.  For a while I've been tying her up to eat, but this isn't ideal.  I worried I would forget to turn off the power for the electric fence, as the place I was tying her had one electrified strand on top.  I worried I would get distracted by the boys and forget about her.  I worried that she would spook over something and somehow hurt herself.

So the other weekend we set about to create a small feeding paddock for Francie, so she would be safe even if I had to leave her for a bit (and I wouldn't have to worry about the electric fence). 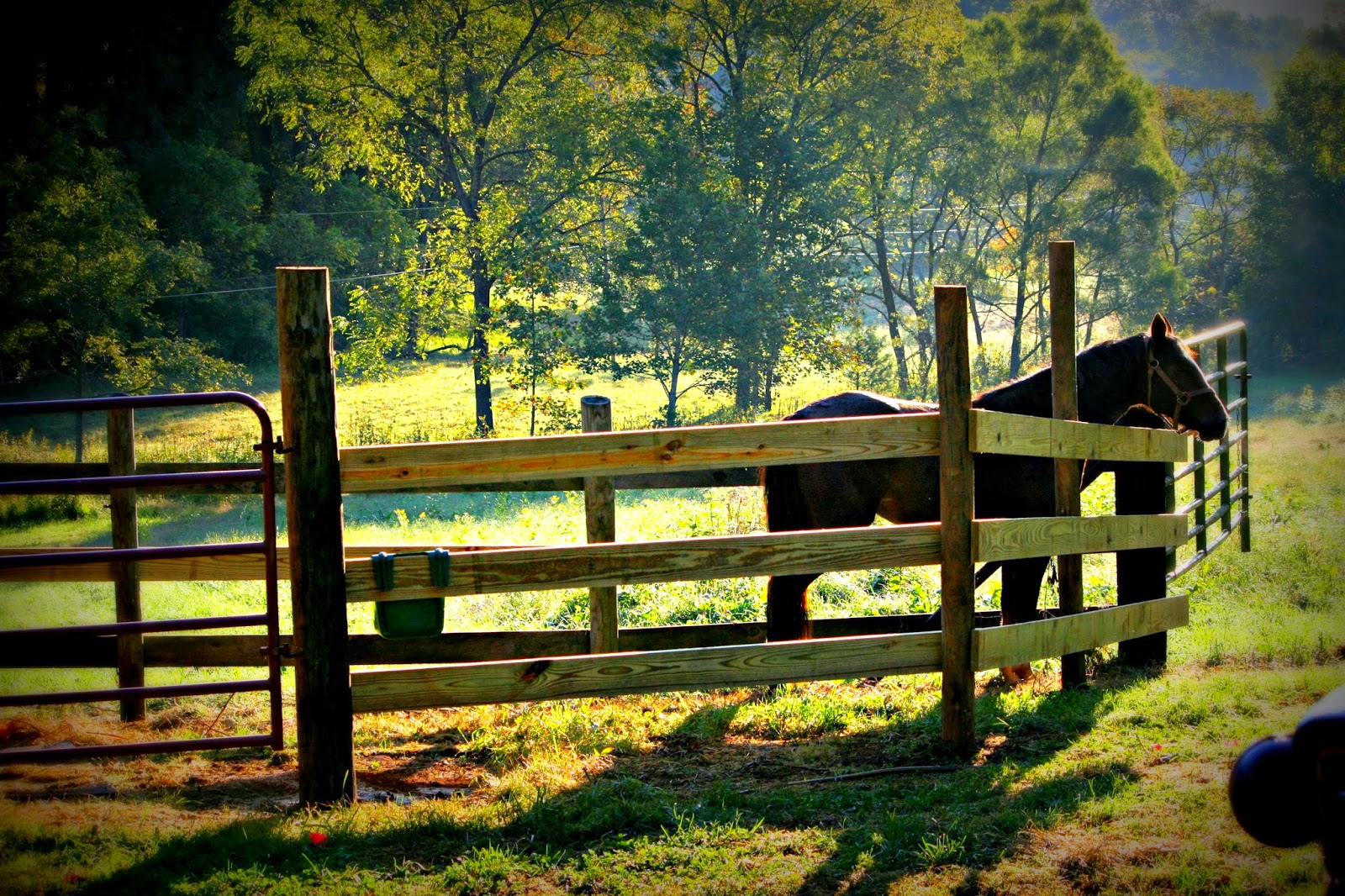 This paddock is really handy too because I can run while she eats and digests, and by the time I get finished and changed into riding clothes, she is ready to go and I don't have to catch her again.  She still continues to be a little tricky to catch. 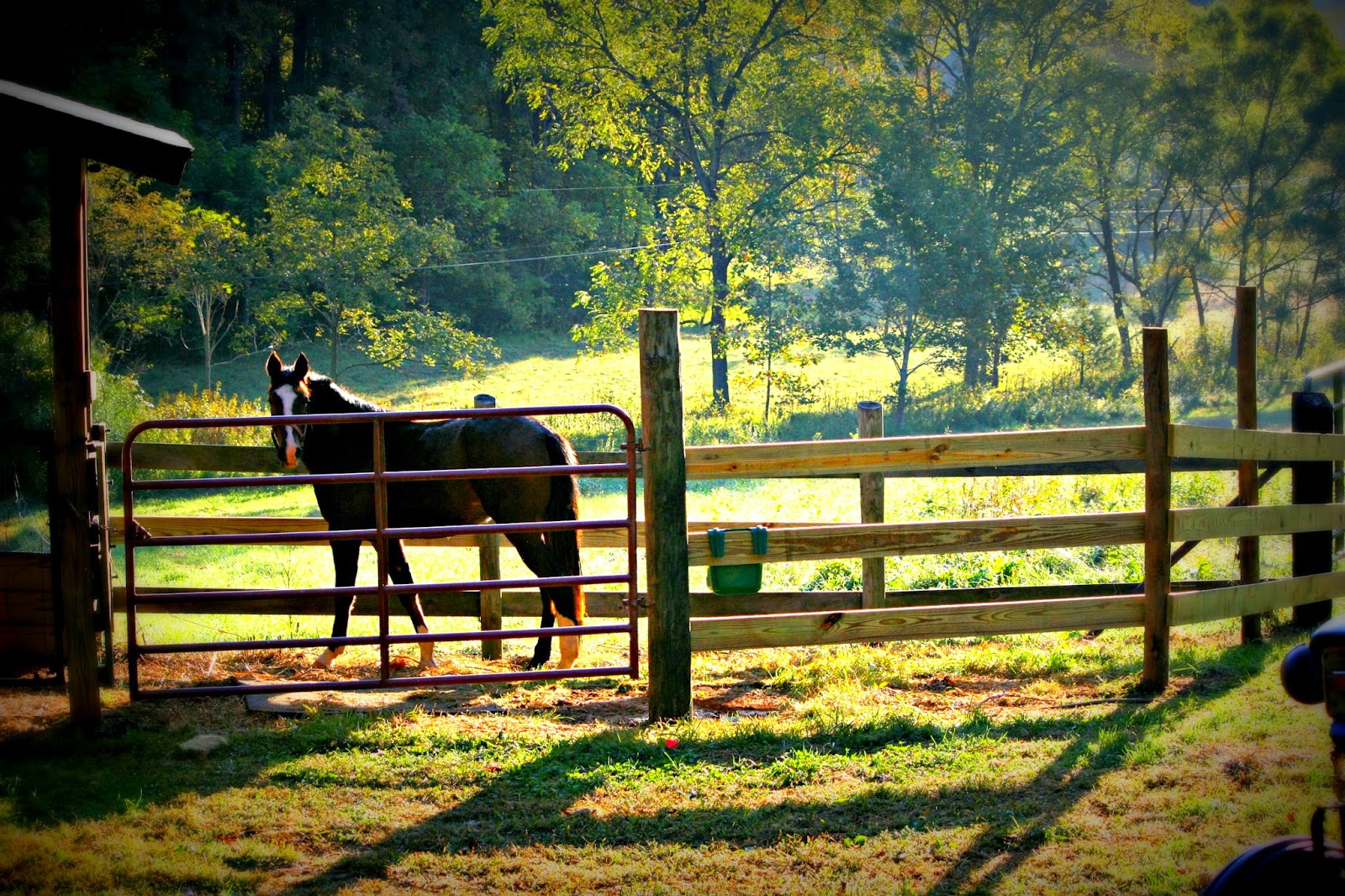 It would also be a handy place for a horse that needs to be closely monitored or that is recovering from sedation.  It's nice and flat.  And I feel much better about Francie eating in there than when I was having to tie her.

Hoping to complete a few more horse-related projects over the winter months.  I love getting things accomplished!

Love the idea...creative and productive and efficient!!! Oh, and Phoenix is NOT fat....just big boned...LOL!...:)JP

That looks good, the work is worth the piece of mind!

Francie seems like the 4th child. Nice that you can get a run in while she feeds.

Nice to be less work to get that job done.

Nice looking paddock. It sure is a good feeling when you know and can be sure that one's animals are safe and where they are supposed to be.

Aww - Francie looks so good, and I'm glad you were able to make the paddock for her; better all the way around. :)

I wonder if Francie has any idea just how lucky she is to have won the New Owner Lottery?

She is so pretty and looks great in these photos. I'm glad you have a place for her that you don't have to worry about.

That is the perfect idea, Lisa and it took me back to a lesson you'll remember: "Pickle in the jar"--where I had to enter a stable with about a dozen horses I had to keep at bay. They do get competitive and bite (nibble) hard on one another. What a nice post!

She probably likes going in there too because that means it's dinner time. :)

She looks like she is loving it too. A win win all round. Love the lighting in these photos and they are such pretty photos.

This is wonderful! But I am now kind of confused. Is she not with you anymore? Where is she?

That's a beautiful paddock. I like your land ,not so steep as mine and so more useful. Most of mine you can't even drive a lawn mower on.

That is one lucky horse, to have you come along and give her a new life. She looks terrific.

Great solution! It's probably good to have an area like that in case there is an emergency or something too.

I know all about those electric fences...the hard way. And mine is a little one...OUCHIE!

Nice to see that she is so well loved.

Her little feeding area is perfect!
And we bet she knows its all hers!
love
tweedles

Nice paddock for her. Great photos

Thats a nice paddock. I bet she is happy in there. It is probably much better than tying.

Francie is such a lucky lucky girl, just like your Boys :-)! Your photos are beautiful.

How fabulous for Francie and you!!! Great job!

You are such a good horse-parent! And I love the light and color in those pictures.

I understand all about getting distracted. It's good you came up with a better system.

I love the idea of not having to chase her down.

Hi Lisa,
You are doing a great job with Francie.
I love your horse, Francie!
Thank you, for all you do for her!
God bless you, family, loved ones.
Big Hugs from Poet Starry.