School is out, but I still need to recap field day.  I was happy to be able to attend, even though I never liked field day as a kid. 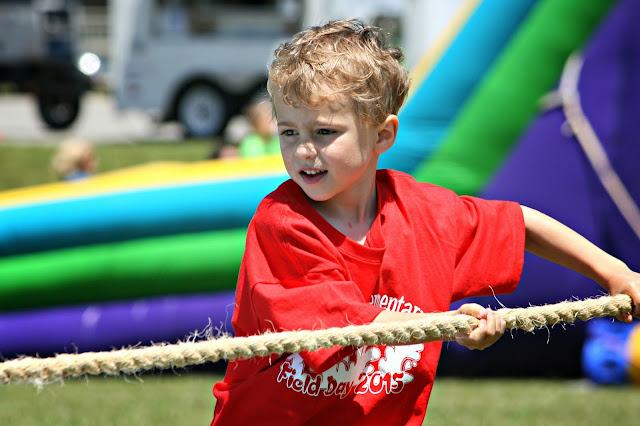 It was chilly that morning, but by the time field day started for my three, it had turned into a beautiful day. 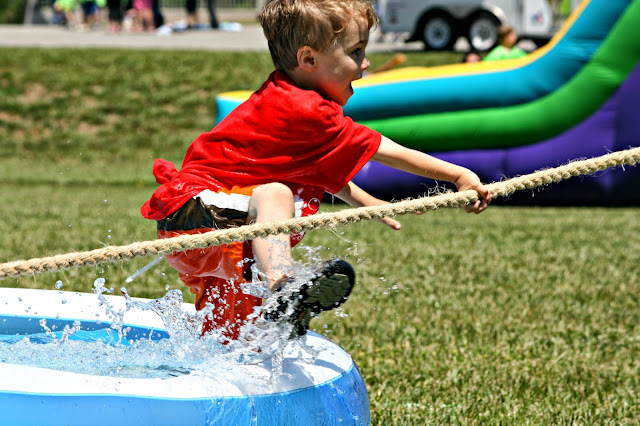 I kept walking back and forth across the field so I could take pictures of the twins, and then of Pierce. 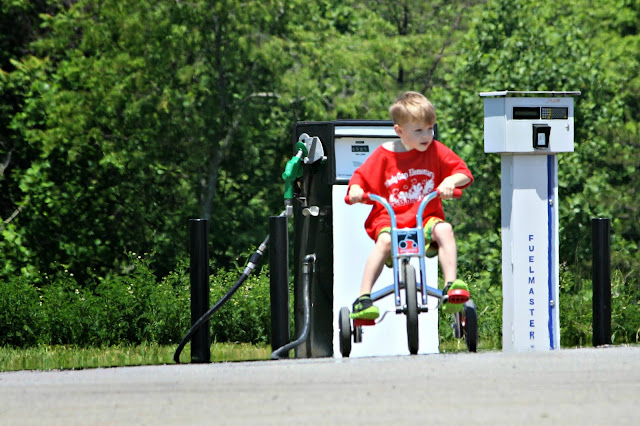 It was fun having all three of them participate.  Although I have to say, the school was nice enough to let the twins participate previously even before they were students. 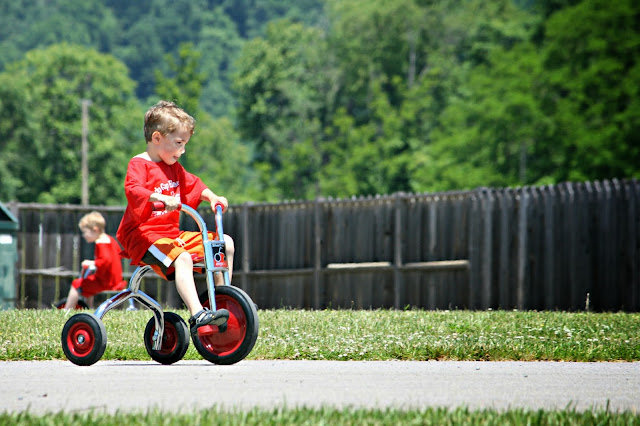 Plunger race.  I missed the leaking hat race that they had last year.  I hope it makes a reappearance for next year. 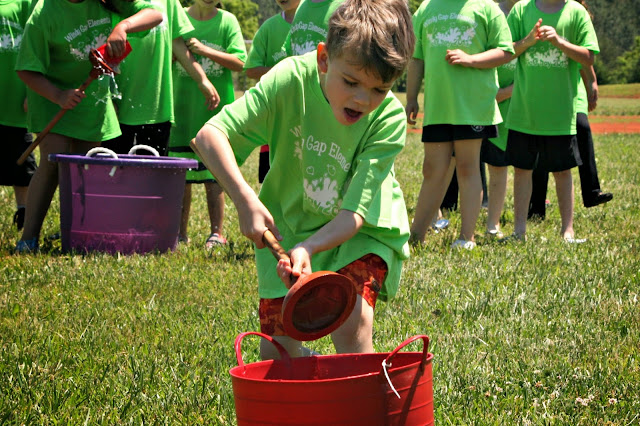 Rolling a tire isn't so simple when it weighs more than you do. 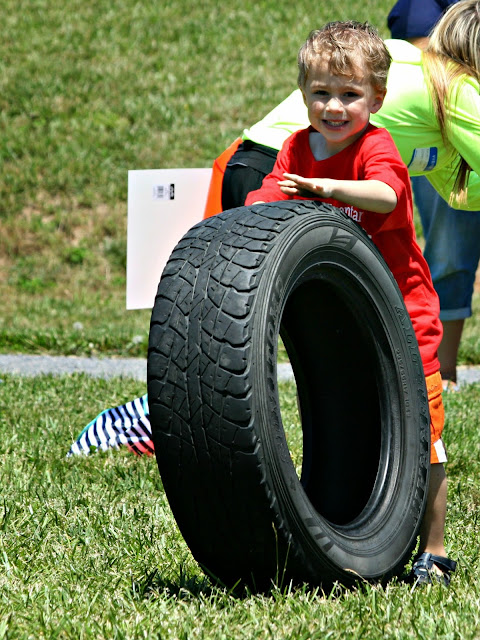 Poor Reid.  His shirt, as you can see, was quite roomy on him.  I had put on sunscreen before he left for school, but that was when he was in regular clothes.  They gave out the shirts at school, and his sagged off his shoulder on one side, leaving him with a sunburn on his shoulder. 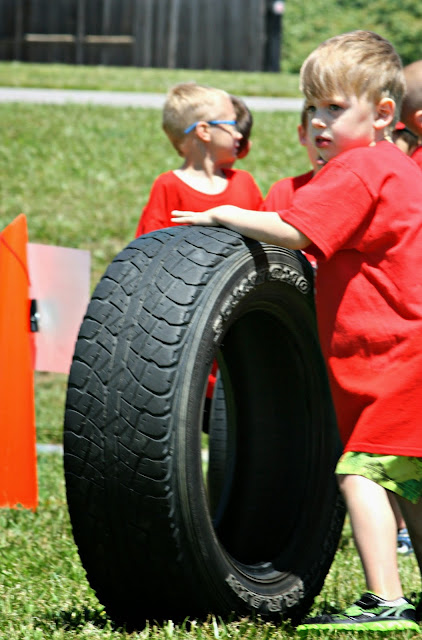 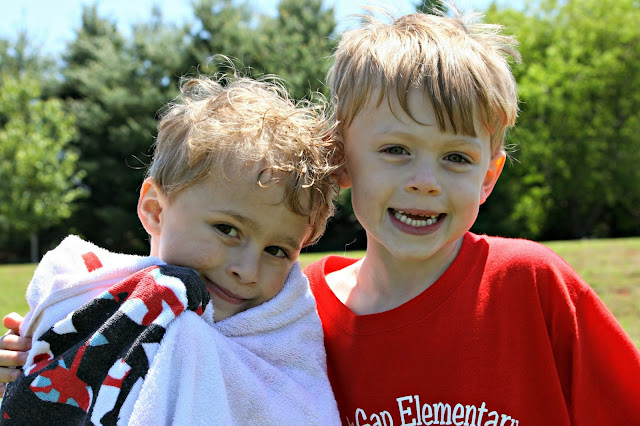 The Homestead Creamery ice cream truck was there giving free ice cream to everyone.  I had the blueberry cheesecake.  Divine. 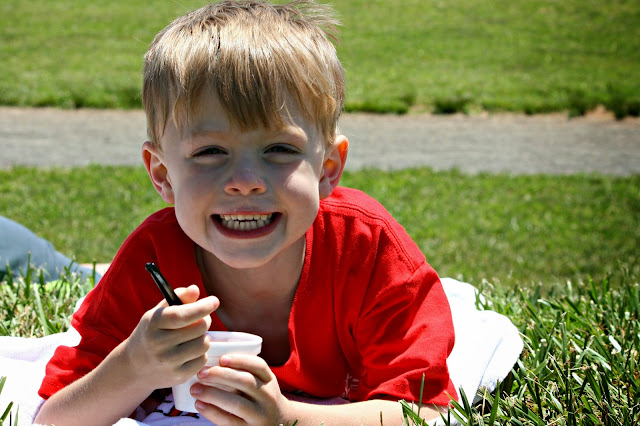 Pierce refused to get wet all day.  He wouldn't even do the big waterslide.  A 5th grader (who had his field day in the morning, before it had warmed up) told him the water was the coldest water in the world.  No amount of begging on my part could get Pierce to do the waterslide. 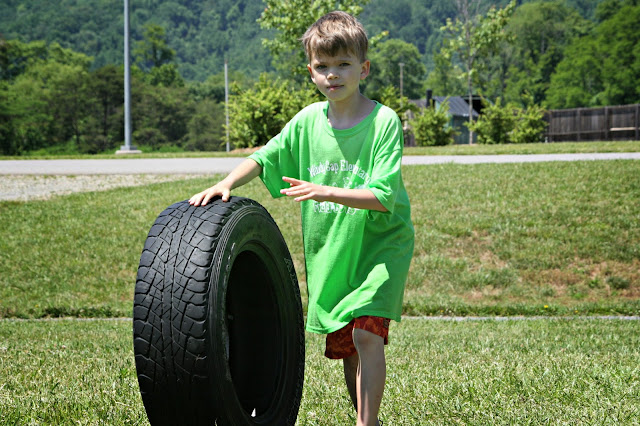 Somehow, I think he still had a fun day.
Readers, did you like field day when you were a kid?﻿

I had almost forgot about field day. I helped a lot with these when my kids were young.

That's fun that they let the twins participate even before they were students. You got some great pics! I liked Field Day. I like it better now though, as a spectator. ;)

That looks like a really fun day! I love the tire rolling event. Some kids don't mind getting wet, or dirty, while others hate it. Maybe it was cold, or he thought he'd look like he wet his pants.

I remember field days when my kids were in school- and the sunburns! Looks like all the kid's shirts were one size fits all! I do not blame Pierce- brrrrr! Your boys are adorable, Lisa.

Great action shots of a fun filled day! You must have been so busy running around. When my twins were really little and I put Rylee's shoes on Rikki, Rikki asked me if she would still be Rikki. That was a real insight into the mind of an identical twin. That had nothing to do with anything but a memory.

I hated field day for almost 50 years ( student for 12 and teacher for 37)! But most kids love it. Your guys are so adorable. Linda@Wetcreek Blog

How fun, and I love seeing those happy smiles.

We didn't have field day, and I'm not sure about now
around here.

Glad they had such a great time. :)

You took awesome photos. I always loved those days when my children were doing them!

Your boys are delightful and so fun to watch. Thanks for sharing the pictures, and yes, I do remember field day. It was some 65+ years ago tho!

Your 3 boys are just so adorable! And I'm sure they never bicker--just look at those angelic faces! I did like field day--not because I was good at any of the activities but it was s chance to wear play clothes and be out of the classroom.

Such fun for all of us to be able to share in this fun day with your cute boys. My goodness how they are growing, and looks as if they had a great time, and some very fun and unique events. Was interested to see that you were familiar with Tangier and that you did some college recruiting in that area.

They had their last day of school here Friday. Hopefully it warms ups for summer.

The kids always seem to enjoy "field day". So glad you were there with your camera.

That looked like the best field day ever!
Everyone had fun things to play with!
love
tweedles

That looks like a really fun Field Day! I don't remember having one as a kid, but my kids had them and I'd go to help. I hated passing out the freeze-pops and having to cut them all open while the kids waited impatiently.

Yes, we enjoyed field days in elementary school--some of my best memories of fun in the sun before summer vacation.

I so enjoy posts about your cute boys. Yes, I loved field day, but looks like they've gotten more fun since I was a kid.

Field days are the best! Looks like the kids had a good time.

I enjoyed field day 3rd through 6th grade. I always attended field day with Kyle. your boys are adorable!

Hmm, not sure that we had field day. Looks like your boys had fun.

Not sure about the concept of field day, is it some activity outdoor I assume? It's been ages since I've been on your blog, I think the template has changed.. I hope I can make time for blogging soon!

That's funny how the other kid left such an impression about the cold water! We had Field Trips, which I did enjoy as a kid. Especially to the local volunteer Fire Department (which isn't volunteer anymore in my hometown). As you might suspect, we were allowed to use the siren. But there were no rides.

I didn't like field day much as a kid either--mostly because I had this inferiority complex about anything involving sports. (I did, however, come in first place when it came to balancing an egg on a spoon...) It looks like your boys had a fun time. That tire sure looked like fun!

Great pictures!
That's funny that you mentioned that you didn't like field day as a child. I didn't either! Fortunately, my kids love it!