When we were at the beach, we discovered there was a roller skating rink above the post office, that had been there, unchanged, for over 50 years.  It was open every night from 7 - 10.  We knew we had to go. 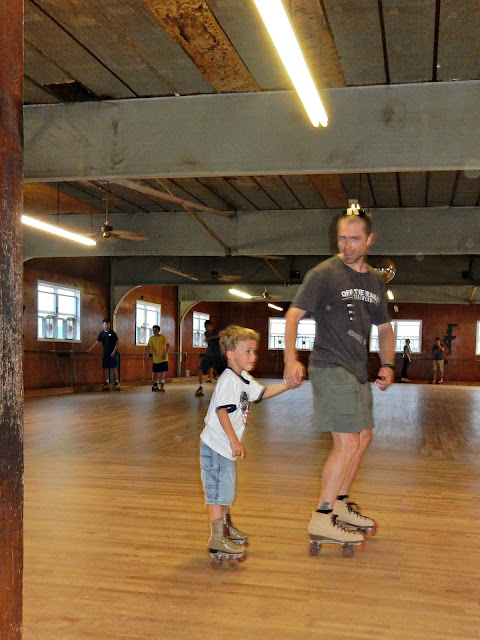 It did not disappoint.  The place didn't even have air conditioning!  They did, however, have fans blowing in the windows and on the ceiling. 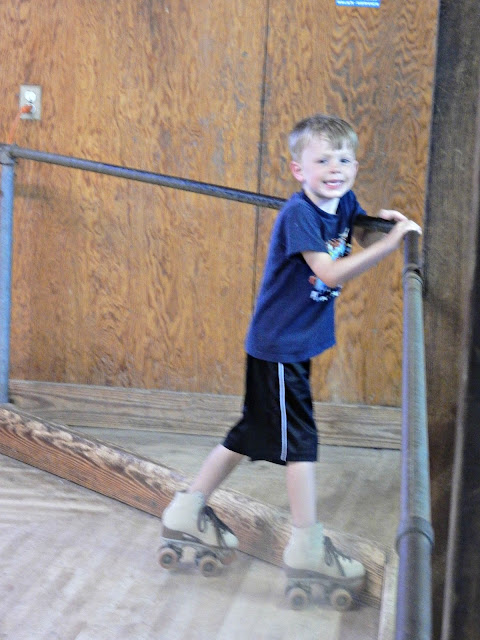 Poor Reid.  Let's just say that roller skating doesn't come natural to him.  He gave it a good try though.

So check this out.  All those skates?  I don't think they've ever been updated.  For $6 a person, you get to skate as long as you want, and the skate rental is included. 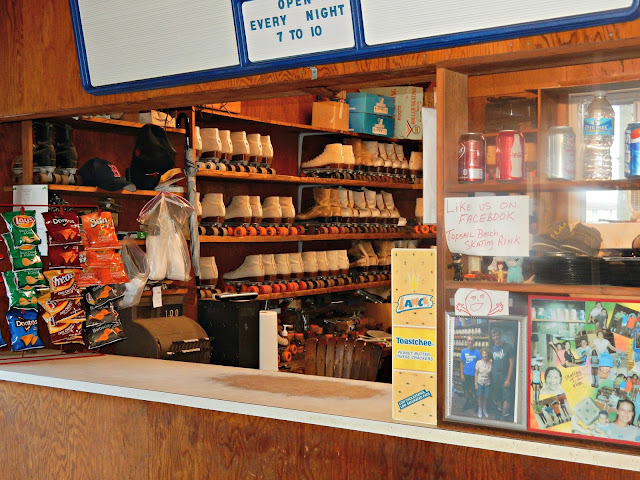 Look at all that wood!  The floor was beveled in a few spots, which just made things more interesting. 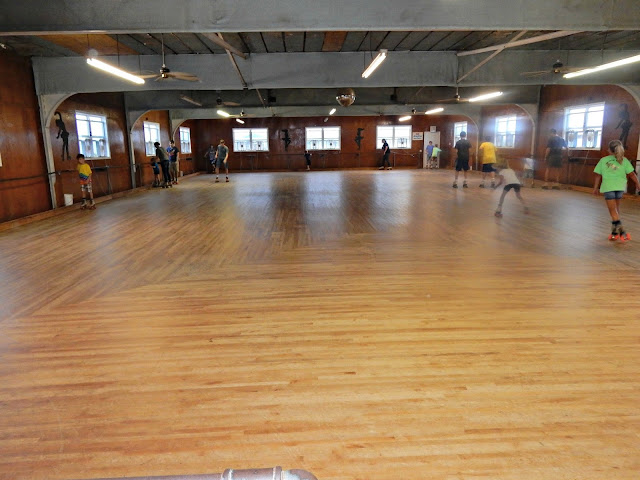 How do you like Pierce's outfit?  He dressed himself.  He also put his shirt on backwards.  I told him, but I guess he didn't want to mess with switching it around. 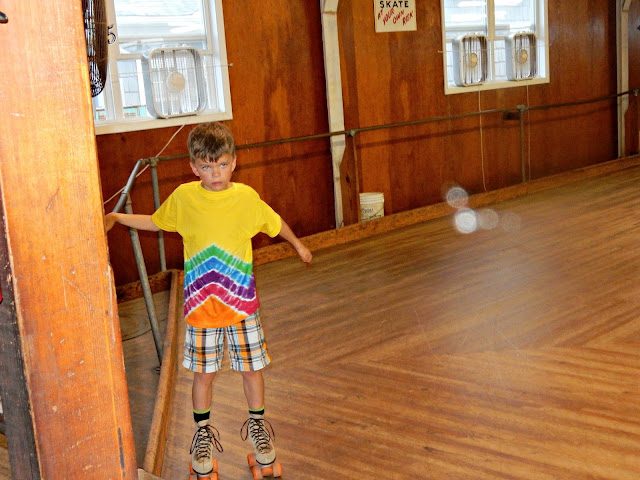 At least they look happy.  And hot!  Cort got a little grumpy as the night went on - he was so mad that he couldn't skate like he wanted or do tricks.  He actually did very well, considering it was his first time, but he is one stubborn kid, and I think he wanted to be able to do figure 8s and jumps. 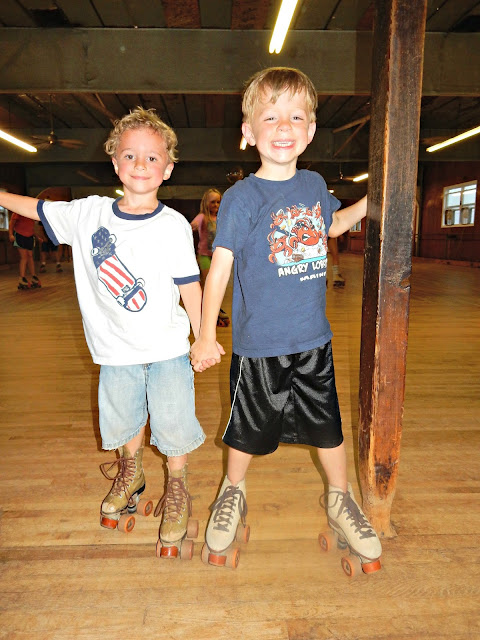 Here, Paul supports Reid, who spent a lot of time on the ground.  I tried to support him for a while, but eventually I thought my arm was going to fall off. 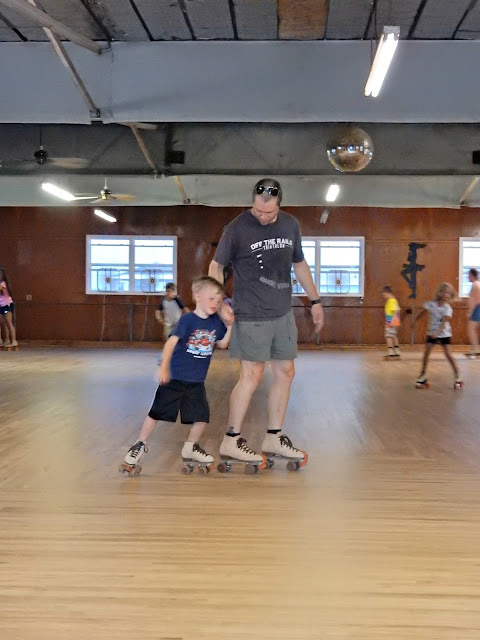 When I said old school, I must say - the owner (who has owned the place forever) plays 45 records.  Most of the songs are from the 50s and 60s.  But at one point she played Elvira.  Talk about a good time. 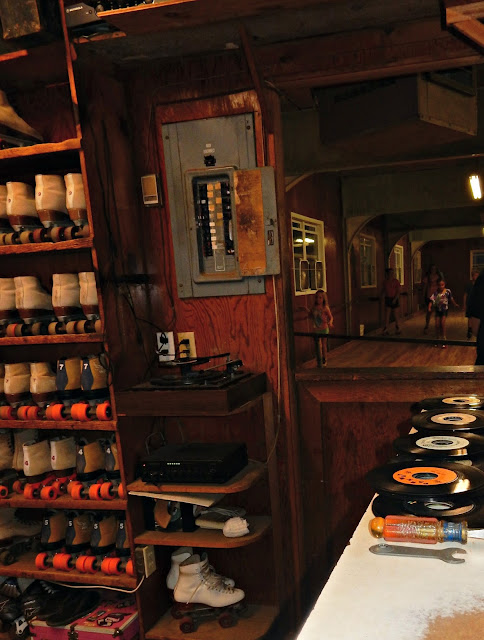 Readers, have you been delighted by any old school finds lately?

There's a roller rink in Plano south of us that the kids went to one time. Skates looked just like those, though the building was more 1960's that yours there. Not sure how the music was supplied, but they had a disco mirror ball on the ceiling! And a Money-box for birthday kids....

Whilst in Metamora last week we discovered an old school gem mine that let you 'pan' for your own gems; that, well, rocked!

wow, just too cool. :) i'm like reid. no natural balance and fear of falling all over. :)

How fun! Pierce is so cute in his "chosen" outfit, Cort being a dancer thought it would be a piece of cake, and poor Reid. I can imagine the frustration, but he surely isn't alone! This brings back some really fond memories. :)

THIS is just about the best thing EVER!!! The place looks Fabulous!

And, the memories you've unearthed in me are priceless. I used to go with my cousins to a roller ring - they lived in a super rural area, BUT, we could earn a trip to town and skate what seemed like forever.

Oh my gosh. I loved Elvira!!! I also loved skating back in the day. Good for you for letting the kids try this. Good clean, cheap fun. :)

Boy, that brings back memories! I can't believe he plays 45's, that is so cool. Looks like a fun time.

What fun, Lisa! You guys had a hot time, too. Never knew Topsail had a skating rink. My guy would have loved that. Linda@Wetcreek Blog

I'm mad that I went to Topsail so much when we were stationed at Lejeune and I never found that place. My wife would have enjoyed it so much.

Well that does look like fun! My boys went skating for the first time this year as well. They looked like fawns that wanted to move, but didn't quite know how.

The one we went to played today's music and 80s.

I like the old stuff they played at yours.

None this cool- wow, it's been ages since I have been to a skating rink. Looks like fun, except for the heat.
I used to love to ice skate..now those were some fun times..ahh, forty years ago. LOL!

This place looks incredible!!! I'd love to visit :-)

My sympathy for Reid, it took me a long time to learn to stop or have a need with that move. When I worked at the Y we took a group a few times a week so I go better. I can skate circles around someone on the ice, it came natural. I think your caloric trade is 20 minutes of skating or running 3 miles. At my age if I ran the 3 in that time I would be having a hard time getting through the doorways.

Oh my GOSH! I would love to do that! I love that she plays records too. I'm dating myself, I know...but we used to skate to an organ player!

Um...I still have my old skates too. I used to take skating lessons for years...so be sure to tell Reid that skating is NOT easy for everyone.

I know how Cort feels. I always wanted to learn quickly and became impatient when I could not. But eventually I did learn to roller skate, although ice skating eluded me because there were only a few days a year cold enough to practice.

I know how it feel. Till now I still can't skate. LOL

This is soooo cool! We have a roller skating rink by us, and Lewie takes private lessons for $15 per half hour! Our family loves to roller skate, and we plan on spending lots of Friday nights and/or Saturday mornings there, especially now that Lewie can skate on his own. I would have loved going to that old school rink!

I haven't been roller skating since I was a teenager. I was never any good--it definitely didn't come naturally! But I had fun. This place looks neat.

Oh wow.. they even had the old 45s laying out. Now that is old school.

Wow! I relate to Cort, as my first junior high trip on a bus with other students was to go roller skating. I don't know how I managed to avoid broken bones, so I too clung to the side rails. The $6 fee hasn't risen appreciably since I was a kid! :)

How fun,
There is an old roller rink at a place called Oaks Park. Its been there forever too!
love
tweedles

That is the COOLEST thing to discover!

What a fun discovery. During college years (1979), I loved to skate. I was never able to do anything fancy.
I love that the owner had the old 45's!
Your boys will get a laugh out of one of the first jobs my dad had when he was a teen in the mid 1930's. He was a pin boy - manually set up the bowling pins at the bowling alley above the Chevrolet dealership in our small town. Sadly, the building was torn down.