How to Make Your Own Hardtack

Previously I mostly just thought of hardtack as being something eaten by Civil War soldiers.  It actually goes back to the time of the Egyptians, used by sailors.  The good thing about hardtack (from a sailor or Civil War perspective) is that it can last for years if it stays dry and is kept away from bugs and such.  It is light and easy to transport (think backpacking) but is dense, so it holds a lot of nutrition.

I have wanted to make some for about a year now.  I finally got around to trying it.  Turns out, it's really easy (and cheap) to make.  In fact, you only need three ingredients.

Mix all ingredients and then roll out on a floured board into a rectangle of about 1/2 inch thickness.  Cut into smaller squares and poke holes in each one with a fork on both sides. 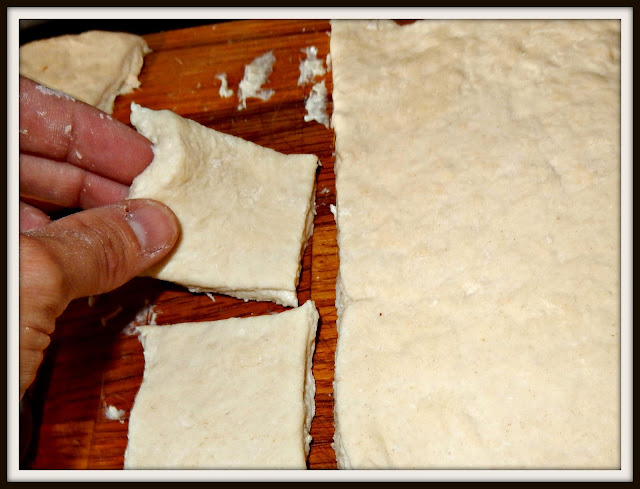 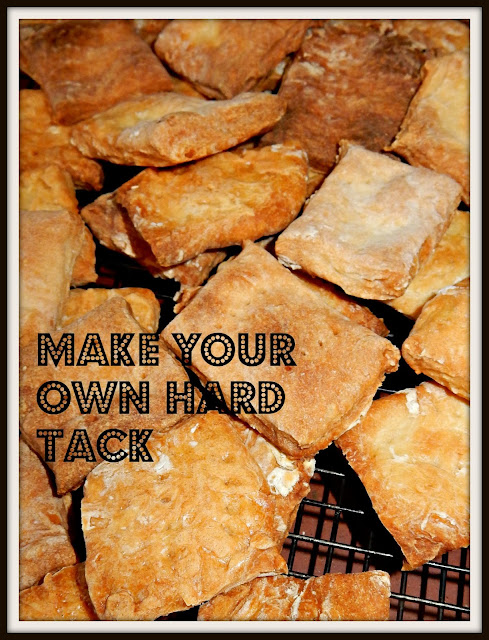 They are rather hard once they are dried, but they taste similar to a very thick saltine cracker.  They had more flavor than I expected.  I think they'd be good in soup or coffee.  We'll take some on our next backpacking trip and try just that!

Readers, would you want to try hardtack?

I made some several years ago and it might be a good emergency food to keep in a sealed kit as it doesn't seem to go bad easily. It would be good to vacuum seal or can it for real long term use. One will need good teeth if eating it by itself.

I've thought about making it, partly for fun and partly to show the kids.

My mom and I made that a loonnng time ago when we read about it in the Laura Ingalls Wilder books. Good to know how to make it I think. I always wondered about embellishments like adding dried herbs or grated parm cheese....

I've actually wanted to try it for years; thanks for posting the recipe so I can finally do so!

I never thought about making it, but it will be great for your active family on your outings. Interesting post. Have a good day.

Have always heard the term, but never knew what it was until now. Thanks for the recipe, Lisa. :)

Never thought about making it, but to be honest, never heard of it either.

Oh I've never heard of it. I'd love to try it though! It would be something great to try with the kids.

That's different and very interesting! Glad you were able to make them.

I don't know why, but when I've read about hardtack, usually in a book taking place during the Civil War, I thought it had meat in it. I thought it was like beef jerky. It's neat that it's so easy to make!

Having been privledged to sample some of your trial batch, I can say this is outstanding. It was really good, had a sweet flavor and was chewy instead of just being a big soda cracker like all the commercial hard tack and ships bread I've stored away.

I'm going to use your recipe to make a bunch and store it in my long term food storage.

No. That doesn't sound very good to me. I suppose if you were starving or out in the wilderness for a long time....like 6 months...maybe....

So yummy! thanks for sharing your recipe, I want to try soon

Yummy! It must be so delicious! Thanks for the recipe. I want to try it soon

I've heard the name, but I guess I never really knew what it was. For some reason I thought more along the lines of jerky. Would be a good keep for preppers too, if vacuum-sealed.

Glad you tried it for me. I've heard they kept it even after it got weevils in it... extra protein!

Oh golly, i love this so much - I'm going to try and place a link in this comment to the Pirate Store - it's a school in San Francisco - that is amazing . . . Your Hard Tack reminded me of them.

Here is the link: http://826valencia.org/store/

Even if i wasn't going across an ocean for days (or months) i would enjoy your hard tack . . .

We have never heard of it!
love
tweedles

My mom used to call hardtack candy that she made out of sugar water and flavorings. She boiled it until it was a very hard candy.

Cool! I'm not familiar with that name, but My Mom used to take left over dough and butter to bake something similar. They often had chopped nuts with syrup inside.

Oh cool, we get "khari" buiscuits here which look similar to these... the name is new to me, these are surely worth trying... such simple easy ones :)