We had a good Halloween.  The boys had a fall festival at school and dressed up as Paul Revere, a knight, and a ninja.

Then they had an event at a local church and they chose Paul Revere, Where's Waldo, and an alien costume.

Finally, we went trick or treating.  They chose the ninja, alien, and knight costumes.  We have other costumes, but they just seem to have some favorites. 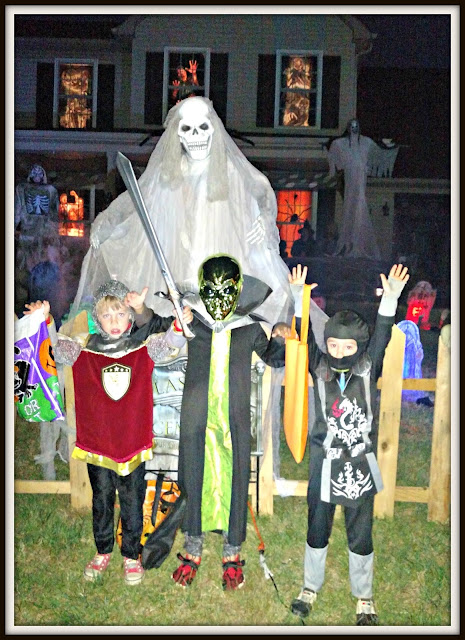 This picture isn't the best focus because the skeleton was moving and flashing, and I used my cell phone to take it.  But you get the idea.  They had fun and got loads of candy.

Readers, did you know that aliens wear smelly toe shoes?

your boys are all getting so tall! and, yeah, it's not the costumes!

Loved to do it as a kid and passed out 8 or 9 bags of goodies.

LOL! Smelly toe shoes... My kids switched costumes by event too...well, except for my teen who pulled off an epic Napoleon Dynamite.

Lisa: Glad that the boys made out well on Trick or Treat Night, and they look like they had fun! The shoe question never came to mind, but you should have seen some of the parents dressed up who accompanied their kids on my parents street! It was hilarious!! :)

How very cute they are, always, with or without the costumes. :)

I was wondering what was on his feet. :-) I loved the candy on Halloween.

I love his toe shoes! Your boys are growing up!

Your family goes all out on Halloween, doesn't it! Great costumes.

I don't even know what "toe shoes" are, let alone why aliens wear them.....

I didn't know that about aliens. Looks like a fun time!

It sounds like a wonderful time! My boys love to dress up to!

Nah..the photo looks fine to me. They looks like they are having loads of fun

I'd say if you get to have three different occasions to dress up and get treats, then you're pretty darn lucky!!!

What an excellent array of costumes!

That's so awesome that you have a lot of costumes for your boys to pick from. My cousin owns a ton of costumes that she lends out to her friends every year :)