Last winter my in laws gave Paul and I a spare Vitamix they had, which we have really enjoyed.  They sent us an attachment to grind flour from wheat berries, but I hadn't had a chance to use it because I had a hard time finding the hard white wheat berries in small portions to give it a test run.  I finally tracked some down at a health food store and tried it out. 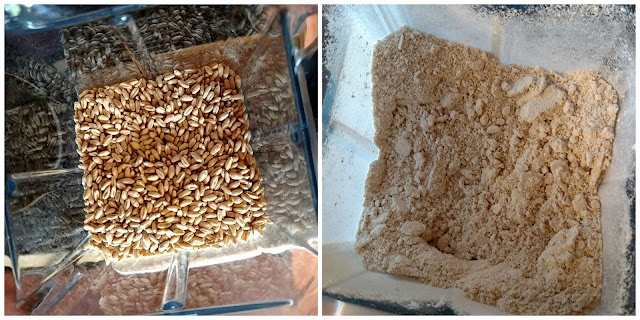 It only took one minute to grind a couple of cups of flour.  Once I figured it out, it was so easy.  Smelled really nice too.  I made some bread with this.  I used my typical bread machine recipe but it turned out rather dense, so I'll have to play with that some.  Everything seems to have its own learning curve, but it's fun to travel those curves.

Readers, have you ever tried to make flour?

Never tried it, sounds fun.You could make a variety of flours out of nuts, or other grains.

I tried grinding acorn flour a few years back but it didn't work out so well.

Could you grow your own wheat and grind that? I've never tried anything like this, but you know how I am about cooking. LOL

Sounds like a lot of fun experimenting and eating! Enjoy it all.

I've never tried it. I used to make bread years and years ago and then stopped. Don't know why. But, just last week tried a recipe I found online. It turned out a little dense, too. Not so much that we didn't enjoy it, though. Needless to say, I've got some practicing to do.

You So Impress me.

I haven't tried to make my own flour....yet!

Well, if anyone can perfect it, you can Lisa. :)

That sounds really nice, you will be growing wheat soon!

You amaze me, Lisa! You have so much energy and love to experiment. A real zest for life! The closest I have come to this is making whole wheat rolls. I am sure you will do a little experimenting and come up with a recipe that is perfect. Stupid me, I never even knew it is the berries you grind.

We would like to grind our own flour one day, but I am not quite ready for that particular learning curve at the moment! I went on Amazon to see what a Vitamix was, and food blenders came up. I thought a mill was needed to grind grains to make flour, so I shall investigate further!

I've made oat flour, and quinoa flour. I bought a sweet potato flour, but need to experiment with it.

I have always wanted to do this. Making bread takes some experimenting when the flour is so dense.

How interesting. No, I have not tried this, but I wish you much success tweaking the recipe...keep us posted.
You guys enjoy the rest of the weekend.

I have never made my own flour. How cool though that you did!

Yes. We have many pails of red wheat. But even though we have a good mill, it's hard on the arms. So we buy flour now and save the stored wheat for emergencies.

I have never tried to make flour- but it looks so nice and I can imagine it smells good too. Sorry the bread was a little dense, but I hope a little experimentation does the trick. :)
~Jess

Nope...never made my own flour. But we don't use much flour here...no bread eating either. I will be curious to see what you do to make it less dense.

Now that is so cool! No I have never tried.

I never try it before but I love too..surely it's healthier!