Backpacking with Kids, the Blooper Edition

As on any hiking trip, not everything went perfectly when we took the boys on a 13 mile overnight Appalachian Trail hike.  We had a few challenges along the way. 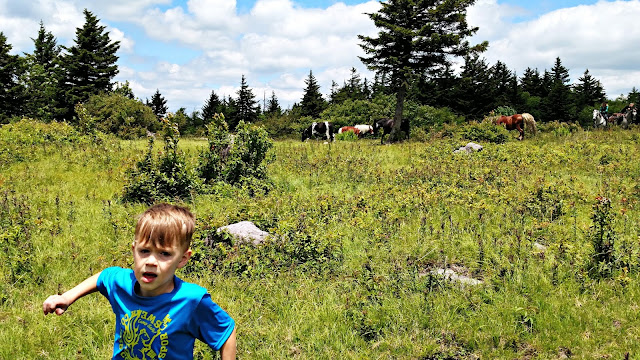 This picture made me laugh because Reid looks like he is running frantically from the grazing wild ponies.  It was really just a photobomb.

As you may remember, I had a crazy hiking boot incident recently, and as a result I decided to wear my old tried and true Lowe hiking shoes.  They have always been comfy and fit well, but I hadn't worn them in a couple of years.  Everything started off well enough, but about 1.5 miles into our trek the soles fell off BOTH shoes!  Just FELL OFF!  Turns out they had dry rotted sitting in my closet unused for so long.

I used duct tape (some borrowed from other hikers, thank you, and some ours) along with some yarn and string to tie things up the best I could. 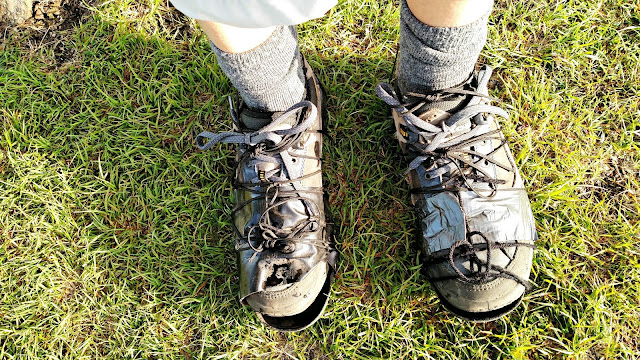 We were just barely into our trip - I wasn't sure how hiking the rest of it in my salvaged shoes would go, but I was hoping for the best.

Not 5 minutes after my shoe hack job, I went into a privy and got stung by a bee.  On my butt.  Sorry, no pictures of that!

When we got to the campsite, we discovered that our tried and true water filter was not working correctly.  So it took ages to filter enough water for our hike the following day.  It hadn't been used in a few years either, so perhaps it ran into similar issues as my shoes.

The temps dropped significantly on top of the mountain, and we discovered that somehow Reid's jacket hadn't made it into his pack.  It was nowhere to be found (somehow, it was in another bag in the car).  He borrowed Paul's jacket for the evening.

I brought a really nifty mylar bag set up for making coffee the next morning, but Paul forgot his coffee mug.  He ended up improvising by cleaning out an empty Mountain House meal packet and using that.

After a lunch break the second day, the boys all had meltdowns.  It seemed that all three of them wanted to be the leader at the same time.  I told Paul that instead of feeding them Cup O' Noodles we must have substituted Cup O' Drama.  I think they were all just feeling tired.

The hike down the next morning was very rocky, and the improvised shoes only lasted about a mile or so.  I ended up tearing off the soles and hiking down in what remained.  Which was basically like hiking 5 miles over rock in socks.  My feet were a little tenderfooted by the end, but it wasn't so bad as I thought it would be.  Here's my shoes when I got home (they went straight to the trash): 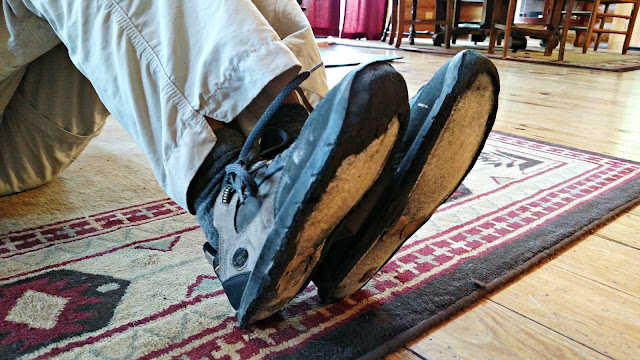 The challenges of backpacking trips like this are actually part of what makes it fun.  You learn to improvise with what little materials you have, and you can make plans for how you can do things better the next time out.  Paul and I were a little rusty since we hadn't backpacked in so many years.  But it is an activity we both love dearly, and now that we know we can take the boys, we hope to have many more trips in the future.  One last thing we learned?  We're a decade older and even though we both are active with running and biking, carrying a backpack up a mountain is a game changer.  We were both very sore the next few days!

Readers, have you ever tried backpacking?

Reid does look like he's trying to get away from the ponies! Great job on the boots--but I am amazed that you were able to hike so far when you had to pull off the soles. Sounds like your good humor and ability to improvise helped you have a great time hiking despite the issues. I have been hiking but not really backpacking. In other words, I've hiked, but not with big backpacks and not overnight. Just small day hikes.

Wow Lisa I admire your stamina and how you think quick on your feet (no pun intended) this is one trip your family will never ever forget for all the good and the bad and the funny (in time) reasons. Well done to all. This is like an epic trip and stories to last. Hug B

I admire ya'll for hanging in there with all that happening. Years ago when I hiked and camped with groups they'd always put me at the tail end so my whining would annoy fewer people.

It sounds like you all had quite an adventure!

nice to practice a short hike with your gear, and it seems something always gets forgotten. I looked at a percolator yesterday and they wanted $70. Yikes, guess coffee went up. It does taste good when out like this.I always took instant.

a very enjoyable family activity, especially with outstanding leg strength, so that the shoes are broken so ... hehe

You guys are tough cookies! :) I bet we'll be hearing about more trips in your future! I wouldn't have made it, as I'm really feeling my age lately. I've done only a little backpacking...also on the Appalachian trail near Harrisburg PA with our youth group many moons ago. Jim has taken our kids, and our son just took a week long trip with some college friends over spring break to SC/GA. He really seemed to enjoy it!

What a trip! I know it's not funny about your shoes, and understand the rough time you had walking without soles, but I gotta tell ya, Lisa I needed this today. Y'all are amazing! And, no I'm not going backpacking anytime soon. :)

A real learning experience. You did good and no search teams or rescue helicopters were required. Next time it will be smooth hiking.

Oh my gosh! I both laughed and winced! Your poor feet and shoes! The picture is for sure hilarious! And a bee sting right where you can't see it! I guess Paul helped treat it! You have the best attitude EVER, and can make the best of anything. Surely you will never go on a camping trip again that has so many things go wrong,

I just showed and read Phil your blog, and he howled with laughter!

There's many a slip twixt the cup and the lip!

Sounds like you soldiered on through it and had a good time go. Your boots reminded me of the movie "The Road."

How fun that you did it as a family! Sorry about those shoes. I'm glad it wasn't so bad, that could have been ugly! :)

These are all wonderful memories that will always bring smiles when you look back.
love
tweedles

Them there are some worn in shoes. haha

I hope you had fun!

These hikes never seem to go as planned :) but it sounds as if you had a good time nonetheless

Ha! What are the odds of both soles falling off like that!!... Sheesh! Good compromising there...

I miss backpacking and hiking. Been stuck in the meeting rooms too long. Hopefully I can have more time this summer :)