In training for a race in November I'm trying to put in as much time on my feet as possible.  I thought maybe I should try to do a run that would prove to be very challenging, in an effort to build up resilience and confidence.  I've always wanted to run a 20 mile stretch of the Appalachian Trail that goes from Route 311 to Troutville, passing by a number of scenic overlooks.  I have backpacked the stretch before, but have taken two days to do so.  A normal 20 mile run for me on pavement would take under 4 hours, and I needed to spend more time on my feet than that for training purposes.  It takes a significantly longer time to cover 20 miles on the AT due to the terrain, but it would be a fun and novel way to do it.

I decided to do the first 3.5 miles with the boys, as it went to McAfee's Knob (some say the most photographed location on the AT - and indeed, it was crowded up top with people and their selfie sticks) and since it was uphill and rocky in places, I wouldn't have been able to run much of it anyhow.  We got an early start, as the day was expected to hit 90 degrees.

Reid stuck with me and we kept a nice pace to the top.  Pierce and Cort quickly lagged behind, and Paul stayed back with them. 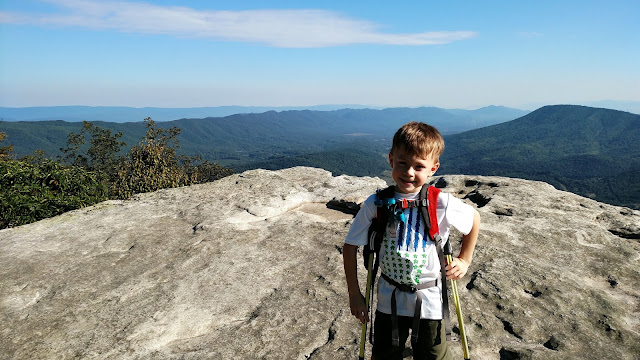 Unfortunately, Reid and I had to kill almost an hour on top before the others caught up!  I wasn't planning on such a long break and was itching to move on, as I knew I had many miles to cover in the heat.  Once Paul and Pierce and Cort arrived, I headed right out on my own.  I carried with me a small Camelbak day pack that included first aid supplies (including a few meds like electrolyte pills, ginger chews, and ibuprofen), headlamp, knife and firestarter, map, water filter, food and water.  I knew some of those things I was unlikely to need, but I wanted to have them just in case things didn't go as planned.

My plan was to run any part that wasn't severely rocky or steep uphill (those parts I would walk).  After McAfees, I had a decent runnable stretch before I had to walk up the section to Tinker Cliffs.  It was getting really hot by this point and I was feeling queasy and concerned I wouldn't have enough water for the amount of heat I was experiencing.  I stopped for a minute to enjoy the view (if you're curious, I wore Hoka Challenger trail shoes with running gaiters over top to keep out debris), check my water situation, and take a liquid lemonade energy form called Glukos.  I only had about 20 ounces of water left and wasn't even halfway.  With temps nearing 90 at this point, I knew I'd be rationing.  I had a LifeStraw in my pack and planned to drink from streams at any places I found them. 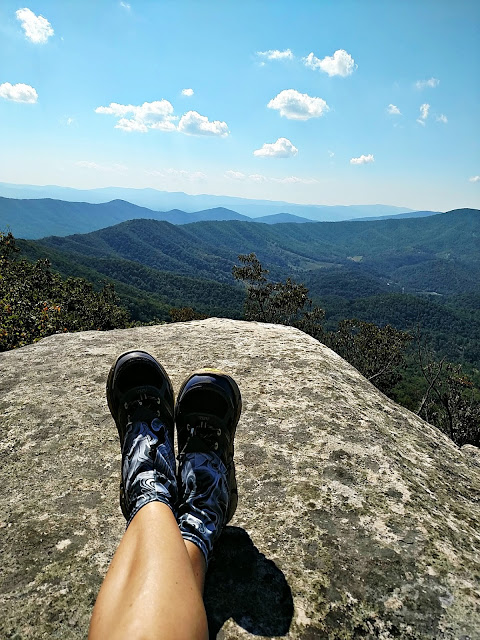 Shortly after Tinker Cliffs, were some fun rock formations I scrambled up and through. 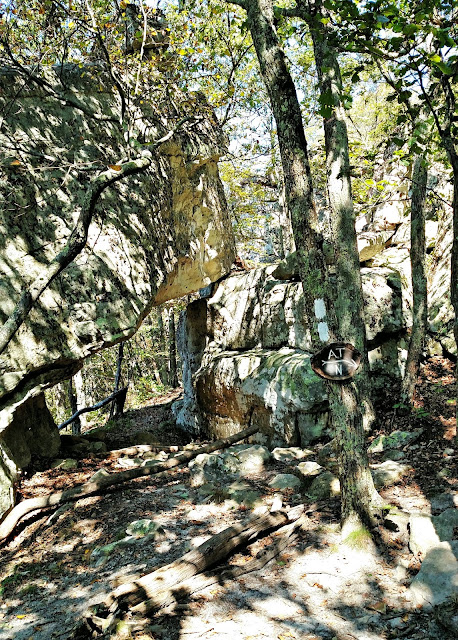 I was able to run a bit after the rocks and was headed downhill.  I started to feel a little better and was able to take a Gu.  I took a picture here, at the halfway point of my run. 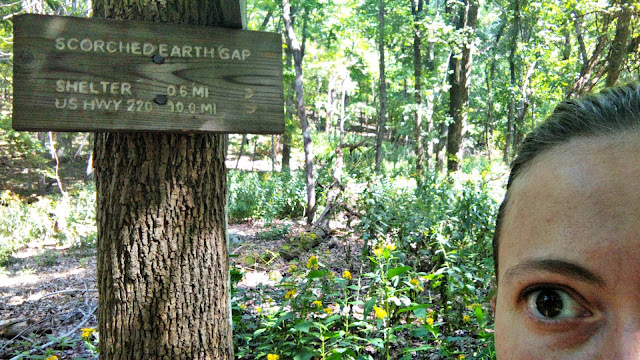 Not far from halfway, I came to a trail shelter.  I asked the people at the picnic tables if there was water, and they pointed me downhill.  Unfortunately, it had been really dry for weeks and the stream was almost dried up.  Still, beggars cannot be choosers.  I whipped out the LifeStraw, which filters out everything but viruses (which are extremely unlikely in the North American backwoods), and hoped for the best, as the water there wasn't even really a trickle.  I drank as much as I could. 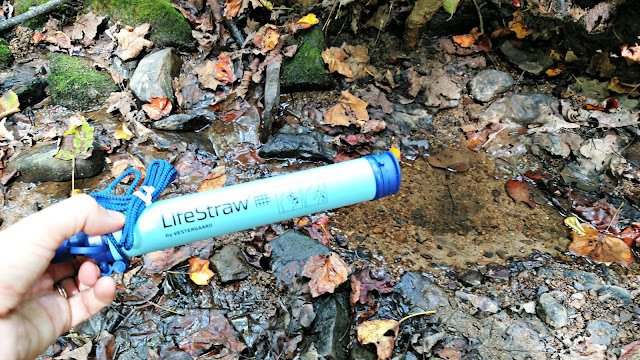 I had so many beautiful overlooks along the way.  The next section had many runnable areas.  It was very hot and I got so thirsty.  I continued to feel queasy off and on, but tried to take a Gu when I thought I could stomach it (throughout the day I only ate 7 Gus and was unable to eat any real food - this is definitely because of the extreme heat that day). 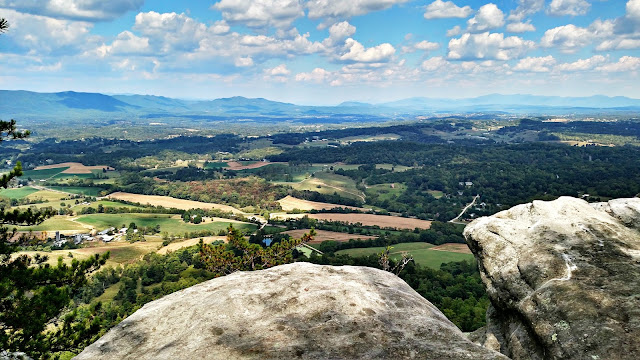 At one point I came around a bend and heard a loud scritchscritchscritch sound.  What on earth?  It was two black bear cubs sliding their way down a tree when they heard me coming. They were right there!  I smiled so big as I watched them run off.  Then I looked for the mother.  I found her on a ridge above me.  She and I eyed one another warily for a moment (I did have mace in my shorts pockets in case of emergency).  Then I walked down the path until I was out of her sight before I started running again. 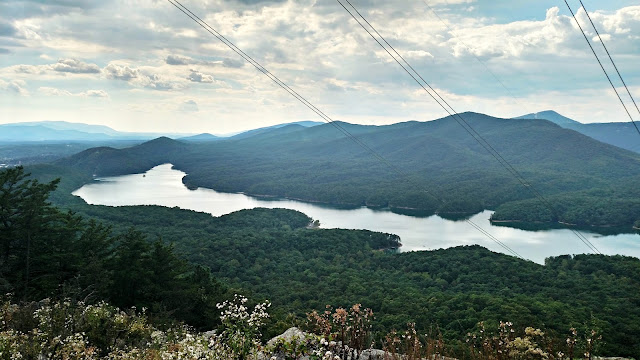 As thirsty as I was, I didn't encounter another water source until a tenth of a mile from the finish. A nine mile dry stretch. So I got dehydrated because I didn't want to drink what water I did have too fast.  With such high temperatures I really needed double the amount of water I had.  I was even seeing double a bit towards the end.  The views of Carvins Cove were amazing though, and gave me a sense of elation despite the hard conditions.  Even though I had discomfort, I never felt like I was in danger of not finishing, and I kept in touch with friends via text throughout.  Most of the time I seemed to have a cell phone signal.

The final miles were very runnable and mostly downhill.  I had a sense that my downhill muscles would be trashed the next day.  I had been on the trail over 8 hours (if you include the hour break when I waited for the boys to catch up in the beginning) and my feet and muscles were all feeling it.  I fantasized about buying the biggest size fountain drink I could at the Exxon station beside where I had left my car so many hours earlier (which was exactly what I did - with lots of ice too!).

I loved this run and hope to have the opportunity to do it again someday.  Next time though?  I'm definitely picking a day with cooler temps!

Hi Lisa, Your photos are simply breathtaking! Good for you for finishing. Wishing you and the boys a great weekend.

You are amazing, Lisa. You kept going and you knew the things you needed to do to keep yourself going. How I would love to see a black bear and cubs--from a safe distance. Maybe the mama bear knew you were another mama bear. :-)

Lisa, my sweet friend, you are my HEROINE!

Please know I'm rooting you on where you go. :)

Oh My Goodness. I was on that run with you --in this post... I was exhausted just helping you along the way. YES---high temps are very very hard to deal with --for us, even when WALKING. One year, it was 95 and stupid us took off (we were in KY) on a trail to see a waterfall. We did not have water (have never ever gone hiking without water since). Anyhow---George's blood sugar dropped and he fainted... Had to get help from 911 to get out of there... SCARY times.

Proud of you... Did you have a vehicle at the other end? Did the family make it there after you finished?

You are definitely a pioneer woman and a survivalist. Getting too dehydrated can deplete your potassium to a dangerous level, but you probably know that. Be careful. You are amazing and so strong! Your last shot is beautiful!

You probably needed about 1 1/2 gallons, a lot of weight to carry. I remember coming out of the hills in AZ so parched I didn't think clear. I used to carry water purification pills also.

Bravo! Lucky you for getting to see the cubs/momma bear.

I love this doccumentary of your hike!!! I have never heard of a life straw. That is something to put in our earthquake preparedness stuff,, and what is a waterfilter?
I loved this,,! thank you
love
tweedles

Way to go! I am so impressed. The views are amazing.

You surely do "seize the day." Sounds like you were well prepared and covered the bases. I really enjoyed the pictures, and narratives.

Seeing double is dangerous! Please carry more water on your journeys. Incredible about the bears! Did you see the story of the woman who ran the entire AT? Don't feel you need to do that!

All I can say is 'well done'....and I loved sharing your trip along the AT.

WOW! What an impressive adventure!

That view is just breath taking! What an adventure you when on.

Oh my goodness...you're not only fit but incredibly adventurous. There are three reasons why I would have never accomplish this run 1) I walk, I don't know how to run 2) It's 90 degree heat. YIKES! 3) Bear cubs and mama bear? I'm afraid I would end up macing myself.

Wow, this was one incredible adventure!

looks likeee you're having fun! 20 miles is not that easy at all..