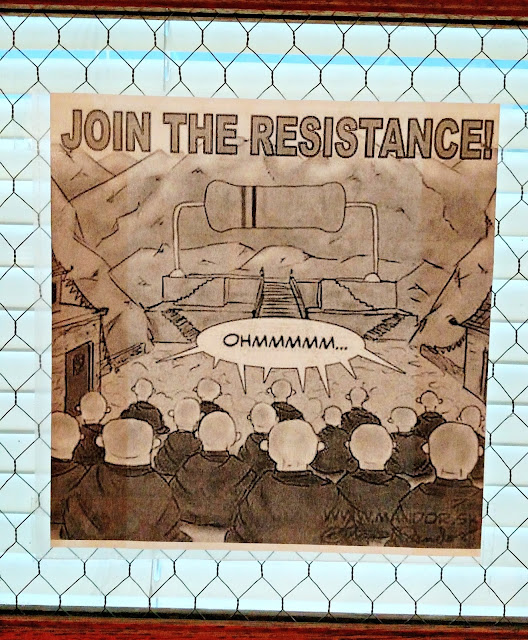 Readers, did you know that resistance is measured in Ohms, or is it just me?

Somewhere in the back of my mind I knew this wasn't a political poster, so I let my science brain come to the front. So happy your guys like OM. My son liked it, too, but he always thought his ideas were the best. Still thinks that way, but has a great job as a project manager for a large oil company. Guess I shouldn't complain. Linda@Wetcreek Blog

I feel at a total loss here having just crawled from my bed to the computer. However, even if I'd waited a few hours I'd still be at a loss. LOL

Your boy are smarter than I am!

I tried to think of the equation we used to dictate the answer. Congrats for participating, both you and the boys!

...somethings go over my head too!

HA --your son is smarter than I am.. I would not have known what that cartoon was talking about.

Great competitions for the boys... Such a great education also!!!!

I thought ohms had something to do with electricity but had no idea how resistance was measured. Pierce has a quick mind!

I have never heard of Odyssey Of the Mind, but it sounds pretty amazing. O.K., Piece is totally brilliant!! He has a wonderful intellectual curiosity that will help him so much in life. And he has even taught me something now.

Sorry, no, the ohms went over my head!

You are going to have to exercise your mind to keep up with your boys.

You have some clever young men in your house.

I have heard the terms and knew they were related. Pretty funny!

Sorry they didn't win. That joke is way over my head :)

Sometimes Mica rattles stuff off that is smarter than something I could think of.

One thing lately was me having a headache. He said, "Mom it's probably the barometric pressure." I had to look more into it. I have thought of that before, but forgot about it.

The challenge for Odyssey of the Mind sound fun!

I just showed this to Phil. He really got a HUGE kick out of it. He did not get it, of course. But then after I told him, he remembered his days teaching small electronics. The object up in the distance is a resistor.

I knew that, from a long time ago. I think the stage on the stage is an old fashioned resistor, like you used to see soldered on transistor radio circuit boards.

Um....no. So, thank you for filling me in on that! What a smart guy you have there!

This totally went over my head too. I love that your son applied his knowledge from studying ham radio; your children are so smart because you expose them to so many great learning opportunities. You're one awesome mom!

I didn't get it until you explained it. Cool that you could help so they could be on the teams. :)