I have often mused over Francie's background over the past four and a half years.  Recently I discovered that I could send off her DNA to Texas A+M, where they have a horse breed registry.  So I shipped off some hair samples and waited with great curiosity.  Here's a recent picture if you want a reminder. 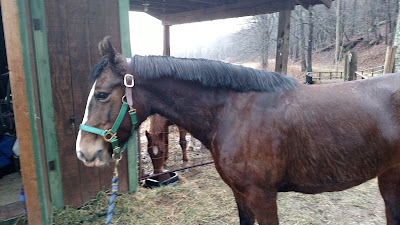 When the results came back I was surprised!  The primary breed that came back was Holsteiner, which is a type of warmblood (a draft breed mixed with a more athletic breed, often thoroughbred). Holsteiners are known to be good jumpers.  I could really see the Holsteiner in her head, and they are often bay in color with minimal white markings, so this isn't what surprised me.

The secondary breed that came back was Caspian.  This is a breed native to Iran, and I wasn't familiar with them, so this was very surprising.  Indeed, they are rare in the United States.  They are small horses, but known to be good jumpers.

The third breed that came back was Arabian.  Francie doesn't look Arabian to me at all.  But sometimes she gets a wild hair and does stick her tail straight in the air like an Arab while running in the pasture.

With all that jumping heritage, you may need taller fences!

Pretty wild , I had never heard of this

Now that's a fun discovery! I want to do the same for our dog, Sally - she is such a curious (weird) mix of lord knows what, we'd like to get an idea.

I haven't seen Francie's actual movement but if she has a high head carriage and animated step and that high flag of a tail when in motion - Arab makes a lot of sence. Caspian.. wow! I think I only saw a photo in a book once on that breed.

I do think it's fascinating, Lisa. Glad you were able to find some of Francie's DNA. We live in such different times now, most of which is good. :)

So, it looks like she should be a good jumper. Isn't amazing they can do all this now?

You are now the Queen of DNA, after practically saving my life with it. For which I will be eternally grateful. I don't know how you manage to find these places! Arabian, so now you are housing royalty! I have heard of Caspian, but know nothing about them.

Very interesting. Thanks for sharing this story.

How interesting to know the previous lineage of your horse. I don't have a horse and am not interested in finding out the previous history of our cows or sheep! But I am curious about my own lineage, and would love to know the mix I am made of!

That's awesome that they can tell so much just from some hair samples. :)

I find DNA fascinating. So interesting to learn about your horse's DNA. Lots of jumping genes for sure! A beautiful horse. :)
~Jess

I used to adore horses. I still like them a ton, but nothing like the young-girl love that resulted in a life-long ambition to one day own a horse. I knew about Caspian because of that zeal, but what an interesting combination!

I don't know much about horses but I think it's interesting that you can send in their DNA for results about their background.

What an interesting thing to do! I'm adopted, but I have no inclination to do this myself!!!

That's so cool that you now know what she is. I love that she's part of a rare horse that isn't much in the US.

My parents got me a DNA kit for Christmas. I so need to do it. I'm curious to know what the dark skin is in my family. My Grandpa is part something. He gets so dark.

I'll tell my daughter about that and see if she would like to know more about Seamus. They are all in the process of moving to Nashville now. Seamus is going down in a horse trailer my daughter contracted, so he is going with professionals. He is really old and there was some concern about him being in the trailer, but these guys know their business so it should be ok.

wooow..I just notice the we can do the DNA test to the horse. I did my genetic testings for my breast cancer as well